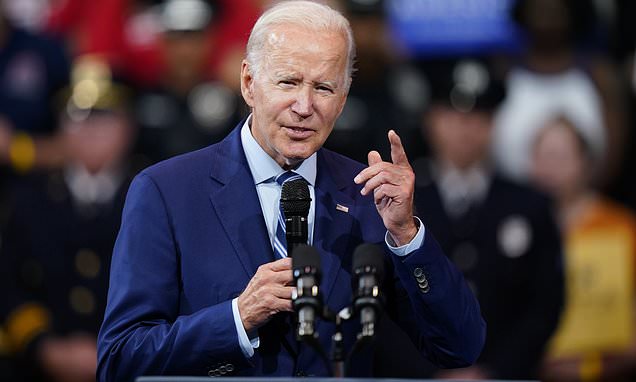 President Biden made a forceful call to ‘fund the police’ and promised he would push through an assault weapons ban during a public address in Wilkes-Barre, Pa.

‘When it comes to public safety in this nation The answer is not to defund the police; it’s fund the police.’ He added, ‘We expect them to do everything…to protect us, to be psychologists, to be sociologists.’

The president went on: ‘You realize more police officers are killed dealing with domestic violence than anything else?

‘We ask so much of you,’ Biden added, speaking directly to law enforcement.

‘I’ve not met a cop who likes a bad cop. There’s bad in everything,’ he said, swatting away at 2020-era slogans that circulated among progressives like ‘defund the police’ and ‘ACAB’ (all cops are b*****ds).

‘I don’t know any police officer that feels good about fact there might be a lousy cop. I’m tired of not giving them the help they need,’ Biden added.

The president outlined his ‘Safer America’ plan for $37 billion in the annual budget to go towards law enforcement and fighting crime, including $13 billion over five years to hire and train 100,000 additional police officers. 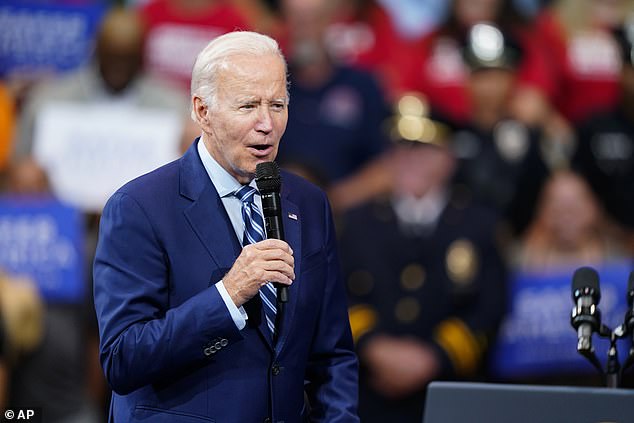 President Biden made a forceful call to ‘fund the police’ and promised he would push through an assault weapons ban during a public address in Wilkes-Barre, Pa. 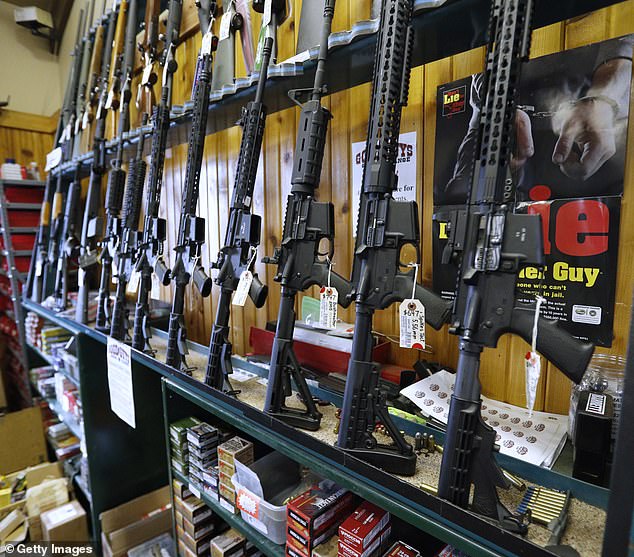 The president also promised to ban assault-style rifles, harkening back to the 1994 ban that expired in 2004. ’I’m determined to ban assault weapons in this country. Determined. I did it once and I’ll do it again,’ he told the crowd of more than 500 at Wilkes University.

Biden claimed that he has two shot guns at home and he is not against the Second Amendment.

‘We’re living in a country awash with weapons of war. Weapons that weren’t designed to hunt, they’re designed to take on an enemy,’ Biden said. ‘For God’s sake, what’s the rationale for these weapons outside of a war zone? They inflict severe damage.’

He quoted the late Justice Antonin Scalia, who said that Second Amendment rights  were not unlimited.

Touting the bipartisan gun control bill from earlier this year, Biden celebrated that he had ‘beat the NRA.’

‘We beat the NRA. We took them on and we beat ’em straight up,’ Biden said. ‘You have no idea how intimidating they are to elected officials. The NRA was against it, which means a vast majority. The vast majority of Republicans in Congress couldn’t even stand up and vote for it.’ 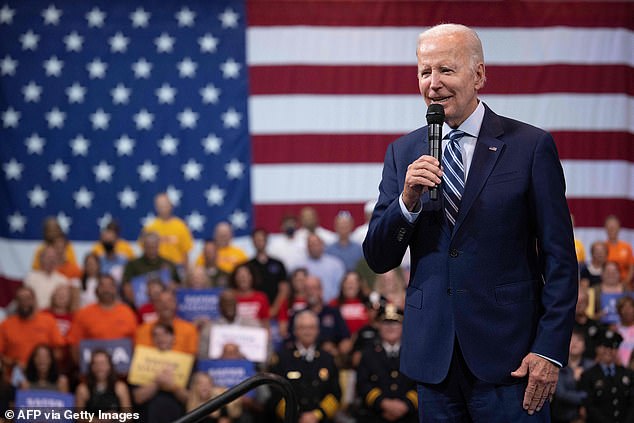 ‘I don’t know any police officer that feels good about fact there might be a lousy cop. I’m tired of not giving them the help they need,’ Biden said

‘We took on NRA, we’re gonna take them on again. And we won and we will win again,’ he added.

The legislation, which received bipartisan support in the House and Senate, will toughen background checks for younger gun buyers, beef up penalties for gun traffickers, close the so-called ‘boyfriend loophole’ and put $750 million up for grabs for states that enact red flag laws.

The president assailed Republicans who claim to support police but have not condemned Jan. 6 forcefully enough.

‘Let me say this to my MAGA Republican friends in Congress. Don’t tell me you support law enforcement if you all condemn what happened on the sixth? Don’t tell me, he said.

‘You’re either on the side the mob or the side of the police. You can’t be pro law enforcement and pro insurrection. You can’t be a party of law and order and call the people who attack the police on January 6, patriots. You can’t do it. What are we teaching our children? It’s just that simple.’

‘Now it’s sickening to see the new attacks in the FBI – threatening the lives of law enforcement agents and their families for simply carrying out the law and doing their job,’ Biden said.

Biden’s trip to the Keystone State comes four days before former President Trump will visit the same town for a rally.

His stop in Wilkes-Barre marks the first of three visits over a week to the politically important swing state ahead of November’s congressional elections.

Democratic gubernatorial candidate Josh Shapiro will appear with Biden on Tuesday but the party’s Senate nominee, John Fetterman, will not. Fetterman will join Biden when the president is in the state on Labor Day. 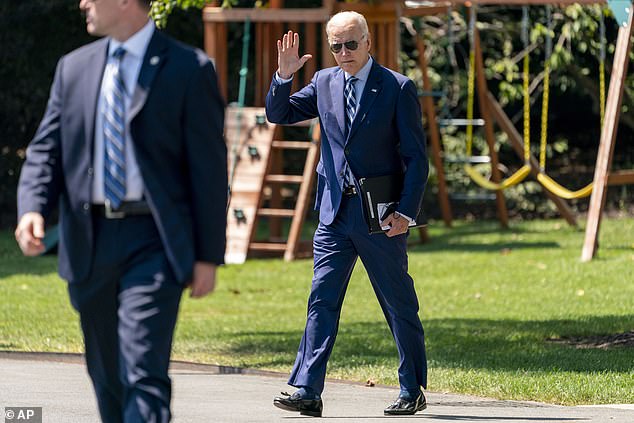 President Joe Biden will make his pitch to ‘fund the police’ and renew his call for an assault weapons ban during his Tuesday trip to Wilkes-Barre, Pennslyvania 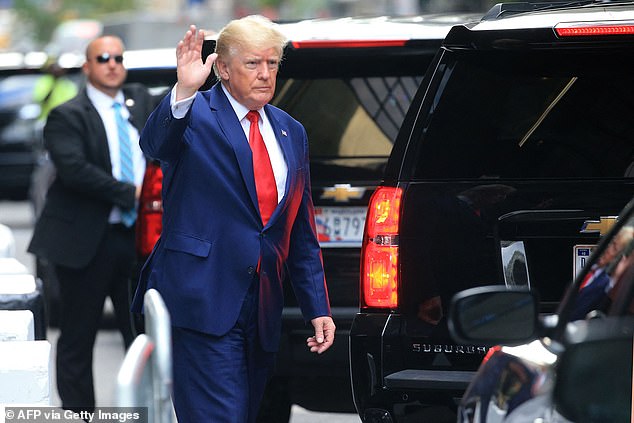 In the highly-competitive governor’s race, Mastriano has accused Shapiro, the state’s attorney general, of being soft on crime.

Republicans have tried to tie the post-pandemic rising crime rates to Democrats and  to the ‘defund the police’ movement that arose out of racial justice protests in 2020.

Biden was originally scheduled to give the speech in mid-July before he tested positive for covid.

Pennsylvania is a big state for both parties in November’s midterm election with its competitive gubernatorial and Senate contests.

Biden also plans visits to the state on Thursday for a major political speech and next Monday to mark Labor Day.

The president will speak Thursday outside of Philadelphia’s Independence Hall, the site where the Declaration of Independence and the U.S. Constitution were debated and adopted by America’s founding fathers.

He will discuss how the nation’s standing in the world and its democracy are at stake. 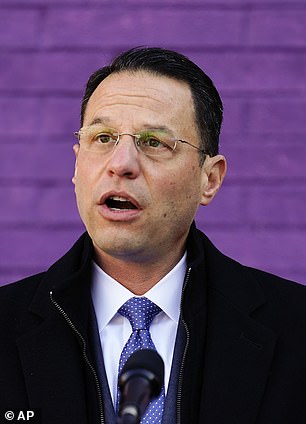 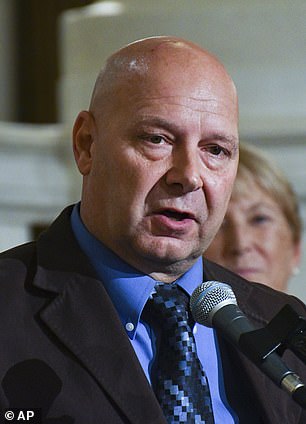 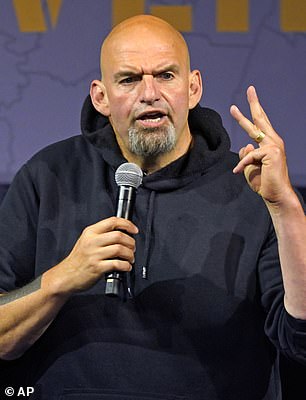 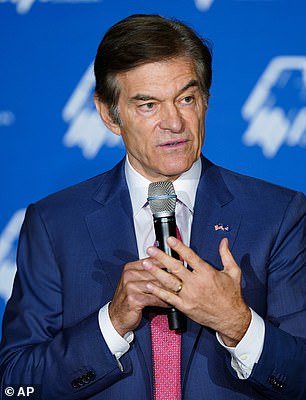 It is unclear if he will mention his predecessor in the Oval Office: former President Donald Trump.

Biden had made Trump’s supporters and his brand of conservatism a punching bag for Democrats, accusing ‘extreme MAGA Republicans’ of wanting to take away people’s rights.

He is seeking to paint November’s contest  – which will decide control of the House and the Senate – as one between the support of Democracy or the GOP extremism.

Biden warned that ‘the MAGA Republicans don’t just threaten our personal rights and our economic security, they’re a threat to our very democracy.’

‘They refuse to accept the will of the people, they embrace political violence, they don’t believe in democracy,’ he continued. ‘That’s why in this moment, those of you who love this country, we must be stronger, more determined and more committed to saving America than the MAGA Republicans are destroying America.’