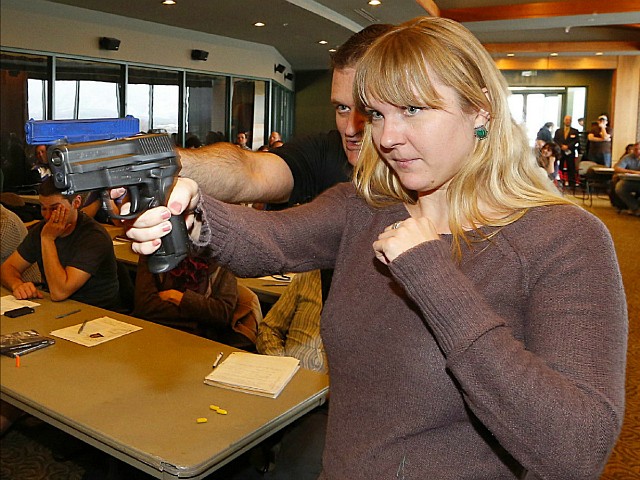 The Republican Party of Louisiana (LAGOP) unanimously passed on Saturday a resolution in support of the National Rifle Association’s (NRA) defense of Second Amendment rights.

The resolution begins by pointing to LAGOP’s “[commitment] to defend and promote the Second Amendment to the U.S. Constitution, as memorialized in the Platform of the Republican Party, for all law-abiding Americans and Permanent Resident Aliens.”

It then points to the “more than 130,000,000 firearms owners in the United States” and emphasizes Democrat efforts to “exploit and weaponize horrific mass murders to diminish and systematically  destroy our Second Amendment rights through introducing more gun-control legislation.”

The resolution suggests Democrat policies make it harder for low-income families to acquire the firearms they need for self-defense while subsequently endangering those families via support for Antifa and BLM:

Leftists’ encouragement and financing of Antifa and BLM riots and violence in 2020 and 2021 was a major contributing factor to 13.8 million first-time firearm owners determined to protect themselves and their families. Of the more than 22,000,000 firearms sold, 40% were female buyers, and firearm sales increased in minority communities such as – black (58%), Hispanic (49%), and Asian (43%).

The LAGOP resolution then praises the NRA for fighting the Democrats’ gun grabs and other freedom-crushing policies.

The LAGOP resolution says, “Be it RESOLVED, That the Republican Party of Louisiana (LAGOP) supports the NRA’s balanced and logic-based approach to promote programs to protect our children and all other innocent victims of violent crimes while not infringing on the rights of the law-abiding citizens to own firearms.”

Our five million NRA members are grateful for the recognition of NRA programs and policies. We appreciate Louisiana GOP’s strong statement of support for the Second Amendment. The Biden Crime Crisis plaguing our nation has Louisianans on the frontlines of this leftist-caused epidemic. The murder rate in New Orleans leads the nation. Soros-backed District Attorney Jason Williams sides with criminals at the expense of the law abiding and law enforcement. This is why Americans of every race, color and creed are arming themselves and taking advantage of the many NRA firearms safety and training programs. The NRA always stands for their rights and supports law enforcement.