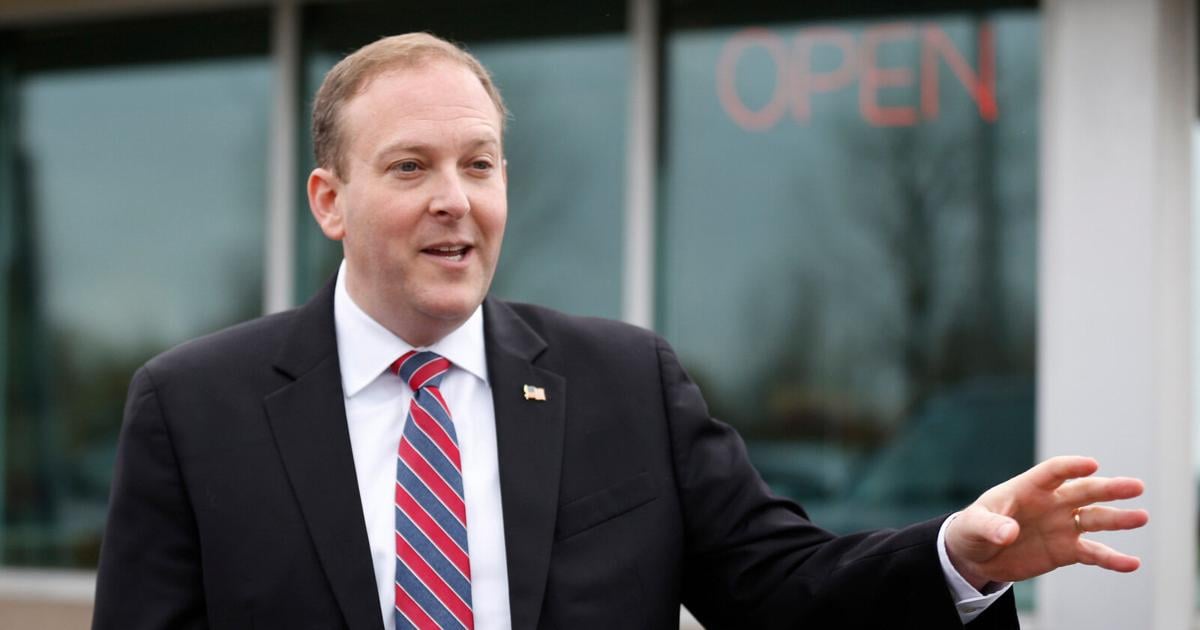 Fresh from his overwhelming victory in Tuesday’s Republican primary for governor, Lee Zeldin ventured into his opponent’s home turf Thursday and didn’t hesitate for a second to make a bold prediction.

“Kathy Hochul will lose Erie County on Nov. 8, 2022,” he said of the incumbent Democratic governor during a Buffalo news conference. “I have found a whole lot of New Yorkers who know Kathy Hochul best, who are actually more upset with her than other New Yorkers who are just getting bad first impressions.

“And they’re loyal Democrat voters,” he added of party members he met in her hometown of Hamburg. “She will end up losing that area – maybe she breaks 30%.”

Zeldin offered his prognostication during a morning news conference at Erie County Republican Headquarters on Main Street, where he was joined by state Republican Chairman Nicholas A. Langworthy to lay out his general election campaign plan.

After garnering about 48% of the Republican vote against three other opponents Tuesday, the congressman from Suffolk County continually emphasized throughout a 50-minute session that his general election themes will mirror the primary: the state’s rising crime rates and what he views as its weak economy.

And though Hochul had just captured a stunning 85% of Erie County’s Democratic vote two days earlier, Zeldin insisted he will capture an overwhelmingly Democratic area that has been Hochul’s home for almost all her life. It may prove necessary, since most political observers say a Republican needs to carry Erie County to win statewide.

Zeldin says his interaction with local voters leads to his optimism.

“There are a lot of Democrats in Erie County who are disenfranchised,” he said. “They feel like the party has left them.

“It’s a very far left view of what the future of New York and America should look like,” he said of a state government controlled by New York City.

Zeldin spent Wednesday night at 500 Pearl for a major fundraising event as well as conducting TV interviews across the state. It followed his own landslide victory of 21 points on Tuesday over his closest competitor, just as Hochul easily dispatched two Democratic challengers.

That launched Zeldin into criticizing Hochul for bills providing for cashless bail, for failing to adequately support police, the arrest and resignation of her original lieutenant governor, public schools he said are controlled by teacher unions, and the exodus from New York of people unhappy about high taxes. He also latched onto Hochul’s claim that she has “evolved” on issues like gun control, moving from a top National Rifle Association rating while serving in Congress to vocal opponent of the Supreme Court decision easing New York’s century-old laws governing possession of concealed weapons.

“The fact is she is trying to be a different person,” he said. “I’m the same person I have always been. My feet are grounded.”

He praised the recent court decision allowing New Yorkers to carry concealed weapons. He also said criminals released from jail under liberalized bail requirements are committing “crime after crime after crime,” while claiming the state’s red flag laws failed on May 14 when a man who “should not have had access to any weapon” used a military style weapon to kill 10 Black Buffalonians on Jefferson Avenue.

And as he has in the past, the new nominee lambasted Hochul’s deal with the Buffalo Bills committing the state to $600 million for a new stadium in Orchard Park. He said the “11th hour” agreement reached outside the view of taxpayers and even legislators required a much higher degree of transparency.

“The process was horrible. It showed a lack of competency by Gov. Hochul,” he said. “She should have gotten a better deal for New Yorkers. It was very irresponsible on her part.”

Zeldin now faces the daunting prospect of refilling his campaign coffers following an exhaustive broadcast effort against his three former challenges. He foresees a combined primary and general campaign costing between $25 million and $40 million, and believes the party will rise to the challenge.

“This party has not been this united in very, very long time,” he said.