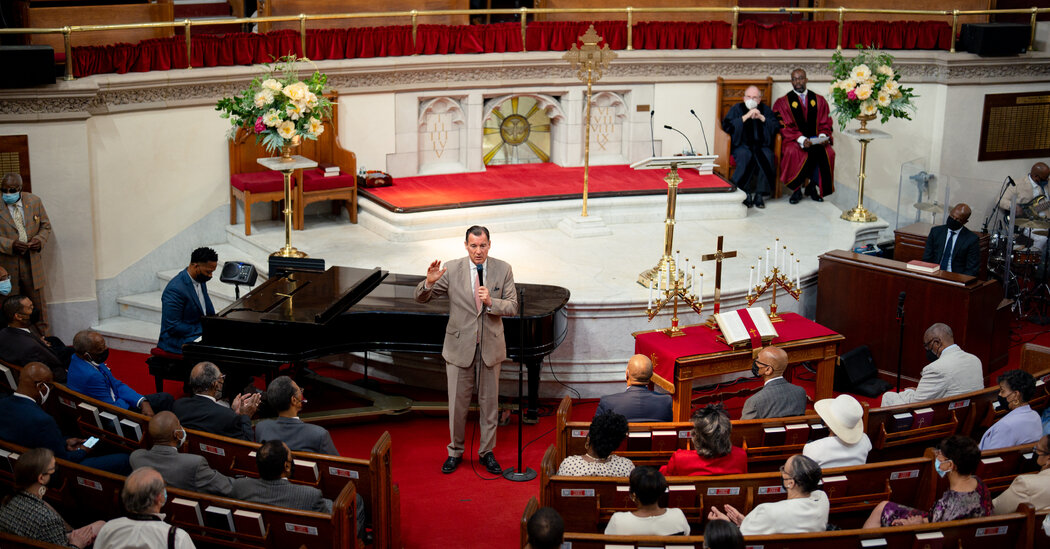 Rulings on abortion and guns shape the final weekend of campaigning before Tuesday’s primary.

A pair of seismic rulings by the Supreme Court jolted the race for governor of New York on Sunday, as Democrats and Republicans made final pitches to an electorate that found itself at the center of renewed national debates over guns and abortion rights.

All three Democratic candidates for governor fanned out Sunday morning to Black churches in Harlem and Queens, Manhattan’s Pride March and street corners across the city to denounce the rulings and promise an aggressive response.

“We’re going to pass a law that’s going to say, you can’t bring a weapon into this church on a Sunday,” Gov. Kathy Hochul, the Democratic front-runner, assured congregants at Greater Allen African Methodist Episcopal Cathedral of New York in Jamaica, Queens.

The Republican candidates, who mostly lauded both rulings, generally stuck to other messages with broad appeal to a state where both abortion rights and gun control are popular — attacking Ms. Hochul for New York’s rising inflation and elevated crime rates.

But in at least one episode, the abortion issue was hard to avoid. Rudolph W. Giuliani, the former mayor of New York City, said that he was slapped in the back by a grocery store employee referencing abortion on Sunday afternoon while he was campaigning for his son, Andrew, on Staten Island.

The police, who did not confirm the abortion remark, said a suspect was in custody but had not been charged. The younger Mr. Giuliani was not on hand.

Equal parts exuberance and frustration, the final pitches roughly hewed the battle lines that were drawn months ago in races that have been punctuated by violent tragedies — like the racist attack at a Buffalo supermarket in May — and buffeted by quality-of-life concerns.

Only this time, the fights played out in the shadow of the Supreme Court decisions issued in recent days on abortion rights and New York’s ability to regulate firearms. The rulings have injected a fresh dynamic into the races and appear to have given Democrats a new sense of urgency.

Ms. Hochul, the state’s first female governor, put both rulings at the center of her weekend hopscotch across the city, highlighting her decisions to spend $35 million to aid abortion access and call lawmakers back to Albany next week for a special legislative session to address the justices’ decision to overturn a 100-year-old New York law limiting the ability to carry concealed weapons.

Hours after the Supreme Court overturned Roe v. Wade on Friday, the governor raced to a protest in Manhattan’s Union Square, promising thousands of New Yorkers that New York would be a “safe harbor” for abortion under her leadership.

In a show of her standing with the state’s Democratic establishment, Ms. Hochul and her running mate, Lt. Gov. Antonio Delgado, also trotted out powerful Democratic surrogates. Mayor Eric Adams campaigned with them in Brooklyn on Saturday, and Representative Gregory W. Meeks, the chairman of the Queens Democratic Party who has prodded her to put together a more diverse campaign, accompanied her to church on Sunday.

“I’m not telling you who to vote for,” Ms. Hochul teased in Jamaica. “You’re not supposed to do that in church.”

Some voters said they were already impressed.

“Thus far, I’ve been happy with what she’s done,” said Shirley Gist, a 74-year-old retired speech pathologist who voted early for Ms. Hochul on Saturday. “If it isn’t broken, don’t fix it.”

Jumaane D. Williams, New York City’s left-leaning public advocate, and Representative Thomas R. Suozzi, who is running to Ms. Hochul’s right, did their best at a Sunday appearance at Abyssinian Baptist Church in Harlem to convince the uncommitted of just the opposite.

“I’m a common-sense Democrat. I’m tired of far left, and I’m tired of crazy right,” Mr. Suozzi said in remarks where he tied himself to Mr. Adams’s crime-fighting plans and pledged to cut taxes and improve public education. He knocked Ms. Hochul for accepting support from the National Rifle Association in past campaigns — an affiliation she has since disavowed.

Mr. Williams did not explicitly address the Supreme Court decisions but laid blame nonetheless at the feet of Democratic power structure.

“I have to be clear, Democratic leadership has failed this time,” he said. “They failed to act.”

Still, it was far from clear that the attacks would be enough to turn the tide against Ms. Hochul, who is spending millions of dollars more in advertising than either primary opponent and holds a large lead in public polls. In fact, some Democrats predicted that backlash to the Supreme Court rulings would only help Ms. Hochul, a moderate from Buffalo who only took office last summer.

“What can the two Democratic challengers do?” said former Gov. David A. Paterson. “They can’t be against it, so they have to kind of sit and watch.”

He predicted a comfortable win for Ms. Hochul: “When people are embattled, they tend to vote more pragmatically,” he said.

Democrats will also decide on a candidate for lieutenant governor on Tuesday. Mr. Delgado has ample institutional support, but he faces a pair of spirited challenges from Ana María Archila, a progressive activist aligned with Mr. Williams, and Diana Reyna, a more moderate Democrat running with Mr. Suozzi.

The Republican race for governor has been considerably more lively — full of name-calling, increasing disdain and sharper policy differences between the candidates. But with scant public polling available and most of the candidates still struggling to establish name recognition with primary voters, even the state’s most-connected Republicans were scratching their heads.

“I have no idea how this turns out,” said John J. Faso, a former Republican congressman and the party’s 2006 nominee for governor.

With Mr. Giuliani and Harry Wilson nipping at his heels, Representative Lee Zeldin, the presumptive front-runner backed by the State Republican Party, spent the weekend touring upstate New York in a campaign bus trying to shore up support in regions that typically sway his party’s primary.

“Everybody’s hitting their breaking point right now,” Mr. Zeldin told a small crowd of about three dozen who gathered in an industrial park outside of Albany. He promised to rehire people who had been fired for refusing to be vaccinated, and to fire the Manhattan district attorney, who has become a punching bag for Republicans.

Another candidate, Rob Astorino, spent Sunday shaking hands with potential voters on the boardwalk in Long Beach on Long Island.

Mr. Wilson, a moderate who favors abortion rights and has positioned himself as a centrist outsider, has done relatively little in person campaigning. But he has blanketed the airwaves with more than $10 million worth of advertisements filleting Mr. Zeldin as a flip-flopping political insider.

Near Albany, an entirely different message was being delivered by Andrew Giuliani, who spent Saturday night spinning laps around the Lebanon Valley Speedway in a Ram pickup emblazoned with his face. He gleefully tied himself to his former boss, Donald J. Trump: “You like that guy, right?”

Though Mr. Giuliani, 36, is an outspoken critic of abortion and proponent of firearms, he spent much of his three hours at the speedway Saturday night reminding voters of his MAGA credentials.

The cheers that rose from the crowd suggested he was among friends.

Wearing an American flag wrap over a tank top, Wendy Dominski, 52, a retired nurse who drove five hours from Youngstown, N.Y., to volunteer for the event, said the other Republicans in the race are either RINOs — Republicans in Name Only — or “flat-out flip-flop liars.”

She had little doubt who the former president supports, even if he hasn’t said so. “Giuliani stands for everything that Trump stands for, and that we stand for,” she said.