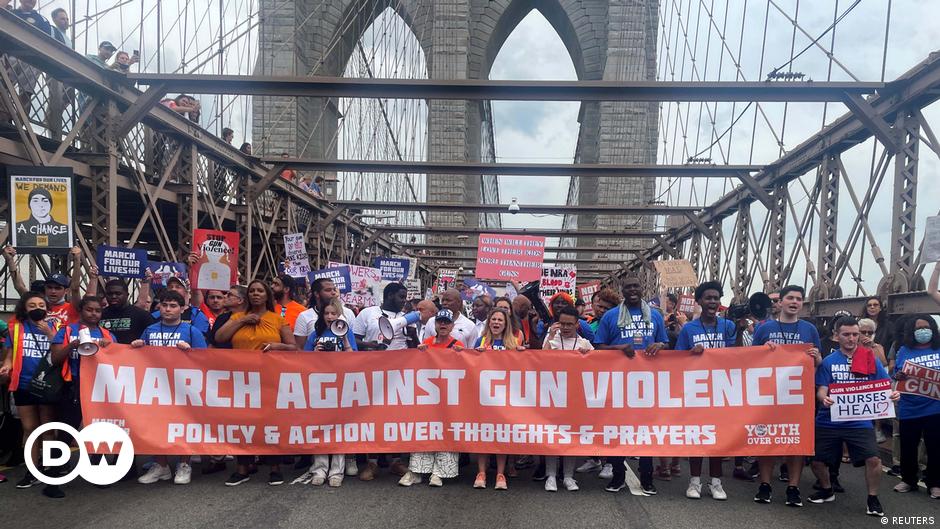 Spurred by recent shootings, US lawmakers have reached a bipartisan agreement on gun control in the country. If passed, the bill will become the first major US gun legislation in 29 years.

US Senators on Tuesday reached an agreement on a breakthrough gun violence bill. The procedural vote passed a mere two hours before final text of the bill went into circulation. Democrats hope to hold a final vote by the end of the week.

The legislation received 14 “yeas” from Republican lawmakers, which indicates that it may advance past procedural stages. Senate Majority Leader Chuck Schumer also said he expected the bill to pass in the legislative body — which is currently divided evenly by Republicans and Democrats.

A recent spate of shootings spurred cooperation on stricter gun laws by both parties.

What the bill will change

It introduces actions that close what has been called the “boyfriend loophole.” Under current law a person is only barred from purchasing a gun if they are convicted of domestic violence while married to, living with, or having a child with the victim.

Current legislation does not prohibit abusers in other forms of intimate relationships from obtaining guns. The proposed measure would restrict firearms purchases in such cases.

The legislation will also require more through background checks on firearms buyers under the age of 21 — including reviews of juvenile mental health records. It also adds stipulations aimed at curbing illegal gun sales, placing stricter penalties on traffickers and those who purchase guns on behalf.

Senator Chuck Murphy, the lead Democrat dispatched to work on a legislative deal with Republicans called the bill: ”the most significant piece of anti-gun-violence legislation Congress will have passed in 30 years,” and a “bipartisan breakthrough.”

Why the US debates over guns

Gun violence resulted in the deaths of 45,000 people in the United States in 2021, according to research from the Council on Foreign Relations.

And gun-related killings in the US are higher than that of most other high-income countries. In 2019, for example, the 4.12 people per 100,000 were killed by guns, while only 0.5 were killed in Canada.

Gun ownership and homicides from guns in the US are higher than that of most other high income countries.

Gun ownership is provided for in the US Constitution, and Republican lawmakers have traditionally been resistant to tighter weapon controls.

But, lawmakers were impeled to work together on an agreement following public outcry over unmitigated gun violence in the country.

A gunman in Buffalo, New York opened fire on shoppers in May and 10 people were killed in what has been called a racist shooting.

Less than two weeks later, a shooter killed 19 children and two teachers at an elementary school in Uvalde, Texas.

Senator John Cornyn, lead Republican negotiator on the talks, is hopeful that the legislation will succeed, saying on the Senate floor:

“We know there’s no such thing as a perfect piece of legislation. We are imperfect human beings. But we have to try, and I believe this bill is a step in the right direction.”

The proposed bill is not welcomed by all. The National Rifle Association (NRA), a powerful gun rights lobby group, expressed dissatisfaction with the deal on grounds that it “does little to truly address violent crime while opening the door to unnecessary burdens on the exercise of Second Amendment freedom by law-abiding gun owners,” said the NRA in a statement.

President Joe Biden had previously pushed for stronger gun reforms — like a ban on assault rifles used in both the Texas and New York shootings, as well as high capacity magazines.

But bills require 60 votes in a Senate that is currently divided 50-50 by Republicans and Democrats.