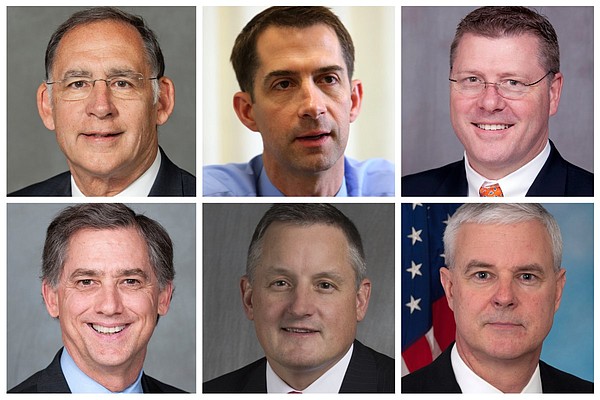 WASHINGTON — Arkansas congressional lawmakers are showing no signs of embracing new gun restrictions as House Democrats look to pass changes this week in the aftermath of the elementary school shooting in Uvalde, Texas.

The massacre at the elementary school, which left 19 students and two teachers dead, is one in a series of mass shootings that have rocked the U.S. and added fuel to the nation’s long-running gun debate.

Democrats are poised to pass firearm-related measures in the House this week, including legislation that would raise the purchasing age for a semi-automatic rifle. The 18-year-old gunman in Uvalde bought two guns, an AR-style rifle and a second rifle, days before the May 24 massacre at Robb Elementary School.

Some delegation members expressed opposition to gun control efforts while others did not weigh in on specific firearm policies being backed by Democrats. Several members put a focus on mental health and school security.

Five of the six Arkansas delegation members, through spokespeople, indicated they were not available for interviews last week or failed to respond to interview requests.

U.S. Rep. French Hill, in an interview after the Uvalde shooting, said the nation faces a “cultural challenge” in which too many people do not value life.

“They try to resolve their own personal dilemmas, their personal problems [or] personal grievances through violence and that’s something that we’ve got to all continue to work on,” said the lawmaker from Little Rock.

Meanwhile, Arkansas continues to grapple with gun violence in various forms, from mass shootings to suicides.

In March, a shooting during a car show in Dumas left one person dead and more than two dozen people injured. Among the injured were five children with ages ranging from 19 months to 11 years old.

Last month, one person died and three others were injured by gunfire in a shooting after a high school graduation in Hot Springs.

In 2020, Arkansas had the 8th-highest firearm death rate among U.S. states, according to data from the Centers for Disease Control and Prevention.

The school shooting in Uvalde came more than a week after 10 Black people were killed in a shooting at a Buffalo, N.Y., supermarket. The accused gunman in the massacre is a white man who posted documents shortly before the shooting that included his white supremacist views, according to the Associated Press.

The House Judiciary Committee passed a legislative package on Thursday that would increase the purchasing age of semi-automatic weapons from 18 years old to 21 years old. The bill would also set up new federal offenses for gun trafficking and straw buyers and put in place requirements on the home storage of firearms.

The measure would also outlaw the selling, manufacturing and possession of large-capacity ammunition magazines, but the legislation includes various exceptions.

U.S. Rep. Steve Womack of Rogers said in a statement that bipartisan changes should be concentrated on “identifying and intervening with high-risk individuals, ensuring well-coordinated and trained law enforcement and enhancing the safety of our schools.”

A statement provided by his office did not mention whether he would support the gun-related policies being backed by Democrats.

U.S. Rep. Bruce Westerman of Hot Springs, in a statement, said “freedom-stifling proposals do not solve any problems and are nonstarters.”

“Will those who wish to redefine adulthood by raising the buying age for semi-automatic weapons also push to raise the age of the draft, raise the age to vote or raise the age of children choosing to have gender-altering procedures?” he said in the statement.

U.S. Rick Crawford of Jonesboro, in a statement, said there should be a permanent effort to raise “awareness of the importance of reporting individuals who are exhibiting signs of instability.”

“Some on the left have also suggested age restrictions on or outright prohibition of certain controversial firearms. I oppose these measures, which, in any event, may be rendered unconstitutional in whole or in part by a pending Supreme Court case,” he said in the statement.

It was unclear what case he was referencing.

School violence touched Crawford’s part of the state more than two decades ago when four children and a teacher were killed in a shooting at Westside Middle School in Craighead County.

Crawford, after the 2018 school shooting in Parkland, Fla., did express support for re-examining the Dickey Amendment, which stated that funds for injury prevention and control at the CDC may not “be used to advocate or promote gun control.”

It did not explicitly prohibit gun-violence prevention research at the CDC. But the language, combined with a funding cut, did have a chilling effect on research, said Mark Rosenberg, president emeritus of The Task Force for Global Health.

Dickey later expressed regret with his role in hampering research.

All of Arkansas’ congressional members have been backed by the National Rifle Association in the past, including Tom Cotton, John Boozman and Hill.

Boozman ran with the NRA’s endorsement in this year’s Senate Republican primary, which he won last month. The endorsement was highlighted in a campaign advertisement as well.

It’s unclear how far the House gun-related measures will go in the Senate, where the chamber is split 50-50 between Republicans and Democrats.

Years ago, the chamber did not approve a firearm background check measure after the 2012 mass shooting at Sandy Hook Elementary School in Connecticut.

Recently, a bipartisan group of U.S. senators have been working on how to respond in the aftermath of the recent mass shooting in Texas.

In a statement Friday, Boozman acknowledged the work that is already underway.

“As talks in the Senate proceed, I will evaluate all proposals to ensure they balance the federal government’s role with the need to ensure law-abiding Americans retain our bedrock freedoms and liberties,” he said in the statement.

The office for U.S. Sen. Tom Cotton did not make him available for an interview with the Democrat-Gazette last week, but during a May 31 interview on the “Hugh Hewitt Show,” Cotton, of Little Rock, said he would track the work of the senators.

A simple solution would likely not work, he said during the interview. The approach should address school safety and the preparedness of parents and teachers in identifying troubled young boys, he said.

While Arkansas Republicans expressed skepticism about gun restrictions, some of the state’s Democratic leaders said the proposals have merit.

Arkansas state Sen. Joyce Elliott, who ran unsuccessfully for Congress in 2020 and 2010, described proposals from U.S. House Democrats as “very much middle-of-the-road” and said the legislation is not outlandish or unreasonable. Both Democrats and Republicans agree that the mass murder shaking the nation is not OK, she said.

“It is terribly bothersome to me that Republicans might not vote for this,” said Elliott, of Little Rock.

Natalie James of Little Rock, the Democratic candidate for U.S. Senate, said she supports a ban on AR-15 weapons.

James added that she is also in support of raising the purchasing age for AR-15 weapons, saying the shootings in Buffalo and Uvalde would not have taken place if the age requirement was higher.