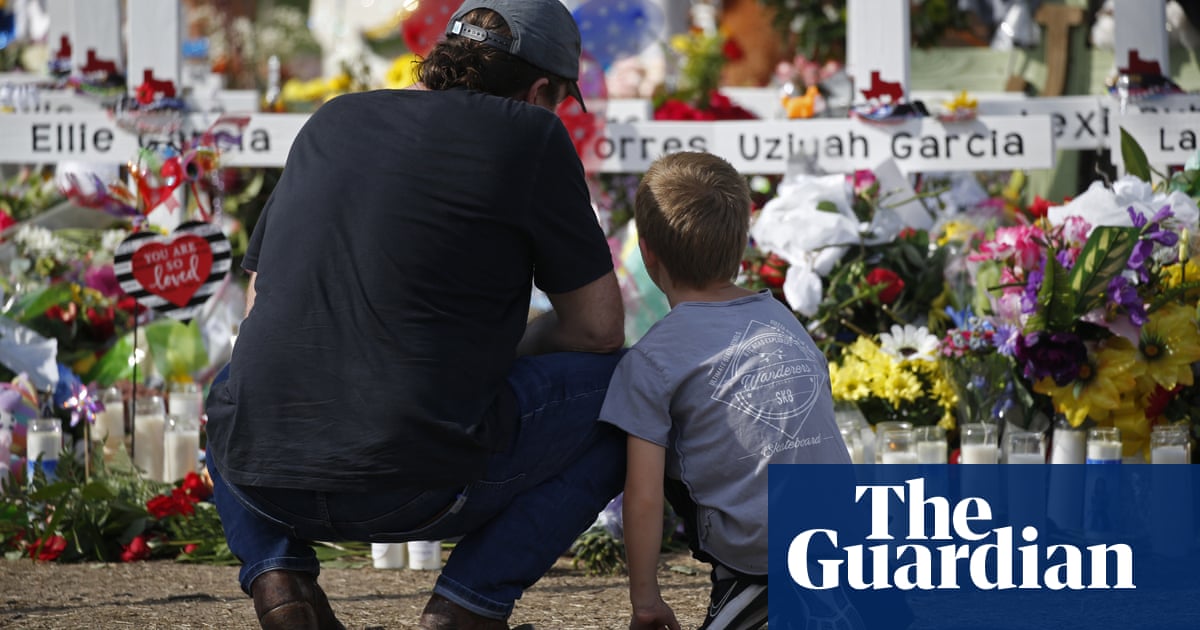 First memorial services for victims begin as president says he will continue to push for gun control. Plus 20 years of Avril Lavigne

The first memorial services for the 19 children and two teachers killed in a mass shooting at their elementary school in Uvalde began on Monday, a day after Joe Biden visited the small south Texas city and was urged by residents to take action on gun safety laws.

Returning to Washington on Monday morning, the US president, wearing a black suit, talked about the “palpable” pain in Uvalde.

Asked by a reporter on the south lawn outside the White House whether he felt more motivated to act on guns now, Biden said: “I’ve been pretty motivated all along. The folks who were victimized, their families … the pain is palpable. I think a lot of it is unnecessary. I’m going to continue to push.”

Republicans in the US Senate have blocked meaningful federal legislation on gun control for many years. Biden said he had not been negotiating with Republicans in the current round of talks on Capitol Hill but added: “I think things have gotten so bad that everybody is getting more rational about it.”

Texas officials have still not declared a winner in the state’s 28th congressional district, where the incumbent Democratic congressman Henry Cuellar currently leads the progressive lawyer Jessica Cisneros by 175 votes out of roughly 45,000 ballots cast.

But as progressives wait to see who will win the runoff, they cannot help but think of what might have been if House Democratic leaders had not come to Cuellar’s assistance. Cuellar secured the endorsements of the top three House Democrats, and the congressman’s campaign was also propped up by millions of dollars in Super Pac spending aimed at attacking Cisneros.

Progressives complain that House leaders’ intervention in primaries like Cuellar’s is making it harder for their candidates to succeed and they worry about the repercussions of the party embracing centrist candidates with controversial stances on issues like abortion rights and gun control.

The potential victory of Cuellar last week, who has previously received an “A” rating from the National Rifle Association, is all the more painful for progressives given the recent mass shooting at Robb elementary school in Uvalde, Texas.

A group of Austin, Texas city council members is preparing a resolution to “decriminalize” abortion there in the event the US supreme court overturns Roe v Wade, a landmark case decided nearly five decades ago that protects the federal right to terminate a pregnancy.

An unprecedented leaked supreme court draft decision showed a conservative majority of the nine justices are open to reversing Roe v Wade entirely. If that happened, 26 states would be certain or likely to ban abortion, including Texas. The state has a “trigger” ban that would almost immediately ban abortion.

A final supreme court decision is expected in June.

The resolution seeks to protect patients and medical professionals from criminal prosecution and would also advise Austin police not to assist other law enforcement, such as state police, in such investigations.

Don’t miss this: Avril Lavigne on the 20th anniversary of her debut album that wowed the world

In an era when bubblegum pop and “sexy baby” personas reigned, 17-year-old Avril Lavigne emerged as its antithesis. Rarely seen without a baggy pair of jeans, heavy kohl eyeliner and a loose tie round her neck, she co-wrote her own songs, with lyrics about skateboarding and getting fired from a chicken shop. Her debut album, Let Go, on 4 June 2002 was not merely a new sound, it was enlightenment. Now, as the album hits its 20th anniversary, its pop-punk anthems are finding new life thanks to TikTok.

Recent revelations could come back to haunt Democratic West Virginian senator Joe Manchin as he considers a run for re-election. For years, Manchin has justified voting against curbs on the burning of fossil fuels on the grounds that they were bad for West Virginia, but following the news that he has been quietly making millions of dollars from his coal business, people are wondering: has the US climate policy just been held hostage to the senator’s financial interests?

A 36-year-old man has been arrested and placed in psychiatric care after he smeared a glass screen encasing the Mona Lisa with cake in a purported protest against artists not focusing enough on “the planet”. Officials at the Louvre Museum in Paris, where the enigmatic portrait holds pride of place, declined to comment on the bizarre incident on Sunday, which was captured on several phones and circulated widely on social media.