K STREET FUNDRAISES FOR DEMS: As Democrats fight to hold on to their majority in November’s midterms, several are turning to members of the downtown community to fundraise for them over the next few weeks, according to invitations for the events obtained by PI.

— Rep. Carolyn Maloney (D-N.Y.), who chairs the House Oversight Committee and is a senior member of the Financial Services Committee, will host a virtual fundraiser with the financial services community on Tuesday, according to an invitation for the event sent to a lobbyist. It’ll cost $1,000 to get in the virtual door as a “silver” attendee, $2,500 to be designated as a “gold” attendee and $5,000 to be designated a “platinum” attendee.

— Then in early March, Rep. Raul Ruiz (D-Calif.) and political action committees for the American College of Emergency Physicians and the “Physician and Dental PAC Community” are set to host an event benefiting half a dozen vulnerable House Democrats, according to a list of upcoming fundraisers sent out last week by the DCCC.

— Meanwhile the law and lobbying firm Brownstein Hyatt Farber Schreck hosted a fundraising dinner for the DSCC last night at the downtown haunt Charlie Palmer, which a person familiar with the matter told PI hauled in more than half a million dollars.

— The scheduled fundraisers come as Republicans have quickly caught up with Democrats’ online fundraising prowess, as the GOP appears poised to retake control of at least the House and possibly the Senate in November. House Minority Leader Kevin McCarthy, a frontrunner to become speaker in that case, has drawn K Street crowds of his own, and recently pulled in more than $9.5 million at a high-dollar fundraiser with the downtown community.

Good afternoon and welcome to PI. Are you or your firm ramping up fundraisers ahead of the midterms? Send tips, invites and more: [email protected]. And be sure to follow me on Twitter: @caitlinoprysko.

A message from Save The American Inventor:

Invention breakthroughs like the many technologies in a wireless communication standard such as 5G come from years of expensive R&D, incentivized by strong patent rights. A campaign to weaken related patent rights threatens to undermine U.S. innovation and is aimed only at boosting Big Tech profits. Read below to learn more.

— “Breitbart executives and some of its reporters have met with Republican lawmakers during the last six months to argue against passage of the Journalism Competition and Preservation Act, according to three people with direct knowledge of the meetings who were granted anonymity to discuss private conversations.”

— “The legislation, S. 673 (117th) and H.R. 1735 (117th), could conceivably benefit Breitbart financially — but the outlet says it is concerned that Breitbart could be left out of the ‘media cartel’ the bill would create, to the benefit of rivals such as Fox News. Other factors complicate the issue: Breitbart is one of the only conservative media outlets that participates in a Facebook program in which the social network sends traffic to news sites.”

— Emily reports that “Breitbart reporters, including Washington bureau chief Matthew Boyle, have told Republican lawmakers’ offices that the legislation would hurt Breitbart specifically, according to the three people. Those individuals said the journalists have reached out to discuss Breitbart’s position.”

— “A fourth person — a lobbyist who has spoken with Republican aides to the Senate Judiciary Committee about Breitbart’s advocacy — expressed surprise about the company’s level of outreach to lawmakers, especially given most news outlets’ efforts to separate their business and editorial operations. ‘With the amount of contacts they’ve had on the Hill, it seems like they should be registering to lobby,’ said the lobbyist, who was granted anonymity to discuss private conversations.”

TAI GINSBERG AND PIKE ASSOCIATES TO MERGE: The boutique lobby shop Pike Associates will merge with the larger lobbying firm Tai Ginsberg & Associates, both offices announced today. The combined firm will operate under the Tai Ginsberg moniker, with Jeffrey Pike and Jennifer Place of Pike Associates joining as chair and director respectively.

— Under Pike, a former chief of staff of the now-defunct House Merchant Marine & Fisheries Committee, his firm has largely focused on issues relating to domestic and international fisheries, maritime transportation, environment, wildlife conservation, animal welfare and natural resources management for its decade-and-a-half of operation, representing clients such as Bumble Bee Foods, the Fishing Communities Coalition, and the Woods Hole, Martha’s Vineyard and Nantucket Steamship Authority.

— The merger will also facilitate a family reunion: Madeleine Pike, a vice president at Tai Ginsberg who recently returned to the firm after a stint with the House Transportation Committee, is the daughter of Jeffrey Pike.

— “The merger will broaden our reach and enhance the value we provide for all of our clients,” Jason Tai, a principal at Tai Ginsberg, said in a statement. “As a former commercial fisherman, Jeffrey is someone who not only talks the talk, but walks the walk when it comes [to] fisheries and related policy issues.”

KNOWING KEN GRIFFIN: POLITICO’s Shia Kapos and Brittany Gibson profile Citadel chief executive Ken Griffin — “the single biggest spender in Republican politics” who “pumped more than $28 million into the GOP in 2021 — and he’s expected to multiply that number leading into the midterms.”

— “The massive national investment by Griffin, a longtime Republican megadonor who has sharply increased his political donations in recent years, positions him to be one of the biggest forces in the GOP’s drive to retake Congress in 2022. And while he has a nonconformist streak — writing a big check to President Joe Biden’s inaugural fund, for example — Griffin’s early muscle is helping his party outpace Democrats’ super PAC efforts.

NRA’S REVENUES PLUMMET: “The National Rifle Association of America shrank significantly through the first eight months of 2021,” according to financial records obtained by The Reload’s Stephen Gutowski. “The contraction came in membership, revenue, and program services across the organization,” while the group’s “income missed the mark against its own budget projections and against what it brought in over the same period in 2020.”

— “At the same time, spending on legal services exceeded both. Legal fees ballooned more than $6.5 million from 2020 to a total of $31.1 million or about 20 percent of the group’s expenses. The amount spent on lawyers was more than ten times the amount the NRA spent on programs aimed at education and training, competitive shooting, law enforcement, community engagement, the NRA Range, NRA Firearms Museum, and school security combined. Legal fees were the second largest expense for the organization behind costs associated with getting and keeping members.”

— “‘They’ve cut back those expenses to the point where it’s sustainable but they’re a much smaller organization,’ Brian Mittendorf, a professor of accounting at The Ohio State University who has followed the NRA’s financials for years, told The Reload after reviewing the numbers. ‘Their budget is sustainable, but at what point do members see a huge chunk of the money is going towards legal costs and the primary programs have really been gutted?’ Amy Hunter, director of NRA Media Relations, said the report showed the organization is in a favorable financial position and maintains its influential position in national politics,” while attributing many of the organization’s struggles in recent years to the pandemic. 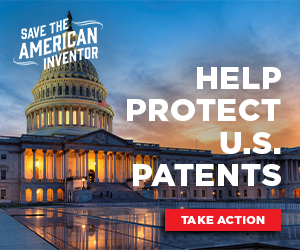 — The Semiconductor Industry Association has added Eric Breckenfeld and Robert Casanova as director of technology policy and director of industry statistics and economic policy, respectively. Breckenfeld was most recently a lead scientist at Booz Allen Hamilton, working primarily with U.S. defense clients, and Casanova previously served as an industry analyst and commodities expert at the U.S. International Trade Commission and is a Sen. Richard Blumenthal (D-Conn.) alum.

— Global Strategy Group has promoted Erin Billings to partner. She was most recently an executive vice president and is a Podesta Group, BGR and CQ Roll Call alum.

A message from Save The American Inventor:

American companies lead the world in developing standard-essential patents (SEPs) for technologies in standards like 5G. To continue doing so, they need balanced rules that incentivize risky, expensive R&D. Yet again and again, Big Tech and other large companies that want to bolster their bottom lines and don’t like paying to use technologies they didn’t invent have pushed the U.S. government to weaken SEP rights. We urge policymakers to examine all the facts and reject these efforts. Weakening SEP rights will only cause America to lose its competitive edge and cede the future of key technologies like 5G and artificial intelligence to other countries, to the detriment of U.S. innovators, our economy, and national security. For more, visit Save the Inventor.