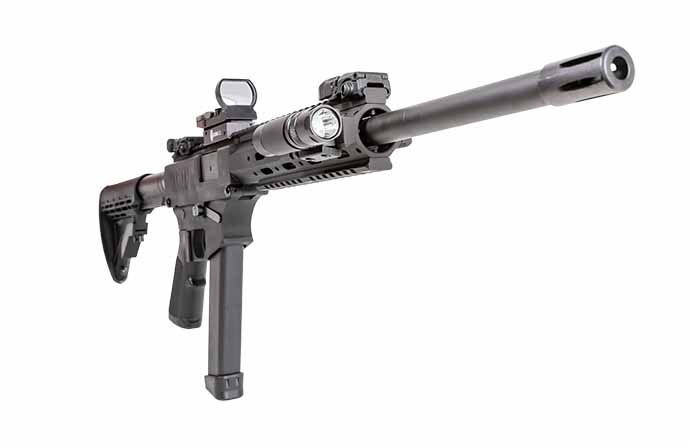 The market isn’t bristling with 10mm carbine options, but there are long-guns that pitch “Perfect 10” if you look.

What Are The 10mm Carbine Picks:

Pistol caliber carbines have been likened to putting a moped engine into a truck. In the case of the 10mm carbine, it’s a slightly larger engine with a bit more giddyap.

Hyperbole aside, the 10mm has redlined in recent years, with everybody and their brother rediscovering the powerful automatic handgun cartridge. Hand in hand with the trend, a rising interest in long-guns chambered for “Perfect 10”, a demand manufacturers have met with lukewarm enthusiasm.

Essentially the 10mm carbine is still an oddity and when it comes to options, pickings are slim. No, not impossible to find. Yet, don’t waltz into this firearms niche expecting to trip over every shape, size and configuration. With expectations lowered, the good news is there are some good names in the 10mm carbine biz and utterly unique designs, not cookie-cutter pistol-caliber ARs. And we’re going to take a gander at a few of the top on the market—or more exactly, the guns that pretty much make up the market presently.

Should I Go 10mm Carbine?

Before we saunter into what’s available, perhaps we should discuss if a 10mm carbine is a wise investment in the first place. If you practically throw your back out because your wallet is so thick and buying a new gun to you is akin to picking up a pack of chewing gum, well any firearms purchase is likely to be wise. After all, it’s a gun. For those of us with meeker incomes and tighter belts, there’s more considerations. And the answer as to the worthiness of a 10mm carbine is similar to any other gun—it depends.

Extra bore certainly adds up to more velocity, since there is a more complete powder burn. But the 10mm isn’t suddenly turned into a brand-new cartridge coming out of a carbine. In general terms, the velocity improvement is in the neighborhood of 20 percent or less out of a 16-inch barreled carbine as compared to a 4-inch barreled pistol. Good, but that’s still with a pistol bullet, which suffers from all the ballistic sandbags of its ilk. You aren’t getting a long-range, heck even really a medium-range upgrade with a 10mm carbine.

That said, the 10mm in its pistol form isn’t for everyone. While no revolver magnum in recoil, the cartridge is still stout enough to require practice to become effective—particularly shot-to-shot. The 10mm in a carbine eliminates much of this. Certainly, nearly every long-gun chambered such is a bucky simple blow-back operating system or derivative thereof. Even so, they’re heftier, with eats recoil, and bring the shoulder into the shooting equation.

Then there’s the issue of affordability. More recently, economical 10mm ammunition has hit the market, giving you a bit more bang for your buck. But it still pales to the likes of 9mm. It’s safe to say, there are ample 9mm options in the 20₵ to 30₵ per round range, while the same class of 10mm ammo runs roughly 10₵ more. Might not sound like a huge margin, but start sending a lot of rounds downrange it adds up. At 25₵ a round, 1000 rounds of 9mm runs you $250; at 35₵ per round, 10mm will run you $350 for the same volume of ammo. If your searching for a plinker pistol-caliber carbine, a 10mm fits the bill, but there are cheaper-to-shoot options available if you aren’t married to the perfect 10.

PPC specialists, Thureon offers a 10mm carbine that’s not only as reliable as the day is long, but also intuitive. The intuitive end of things comes from the company patterning the gun after the AR-15, with magazine release and safety where they should be. But get into the finer points and the carbine is a drastic break from the ubiquitous platform. The most obvious difference is its side charging handle, but it goes deeper than that.

Get under the hood and about everything you could conceive of is different, the most drastic the feed ramp, which is bolted into the lower receiver ensuring the simple blow-back carbine chews through whatever it’s fed. It will too, from ball to hollow point to monumental and hard-cast lead.

The Defense model is middle of the road price-wise in the company’s catalog, but is a more practical setup for most shooters than Thureon’s Standard and Competition models. An octagonal handguard around its 16.5-inch barrel has plenty of space for accessories and its full-length Picatinny rail opens up optics-mounting options. Also, the Defense is compatible with Glock magazines, which greatly opens up your options.
MSRP: $1,199, thureondefense.com

Prepping is an area where the pistol-caliber carbine concept thrives. Feeding a pistol and long-gun from the same trough is a robust strategy, one which TNW allows you to embrace full-heartedly.

Flexibility is the name of the game with the Aero Survival Rifle, but you aren’t purely confined to a 10mm carbine investing in one. Quick-change barrels give you the option to jump between .22LR, .45 ACP, .45 ACP and .357 SIG in addition to perfect 10. Peace of mind, when versatility most certainly can save your life.

Originally conceived as survival option for pilots, TNW has engineered some other interesting facets into the carbine. Most notable, it’s a takedown rifle with the carbine breaking down to a package no larger than its 16-inch barrel. It’s also light—5.5 pounds—making it ideal for your rucksack and backcountry adventures.

Like most guns in its class, the Aero isn’t quite as quick to manipulate as say an AR—a function of the side-charging carbine’s heavy bolt and spring. However, it will load, go BANG! and reload every time you need it to—which is exactly what you want out of a survival gun. Oh yes, it’s Glock magazine compatible to boot.
MSRP: $699, tnwfirearms.com

Admit it, you look at this at the gun show and checked your pockets for the spare change to take it home. No shame, because what the Hi-Point 1095 lacks in style and grace, it more than makes up for in reliability. Not to mention, you aren’t going to cry if you dent its fender.

Nobody is going to claim the blue-light special 10mm carbine is a tack driver, but it more than has the stuff to fill any utility, home defense or hunting role you can cook up for it. Basic as a long-gun comes, the 1095’s simple blow-back action gives it the chops to chew through any ammo you feed it. And weighing in at a hefty 7 pounds, the gun makes the 10mm a veritable kitten—even the hot stuff. Slap a suppressor on it—yes, it has a threaded muzzle—and the carbine might be one of the most manageable on the market. Also, unlike many PPC options, the 1095 has last-round hold open.

To the downside, it’s ugly, it’s ugly and it has several undesirable design points. The sights are no picnic but can be removed via set screws if you want to run a red-dot. And the body is made of polymer, with doesn’t give it quite a premium feel or look. But the real kick in the pants is the magazine, it’s proprietary and only 10-rounds. Still, if you’ve got a beggars-can’t-be-choosers budget Hi-Point has you covered and dependably so.
MSRP: $389, hi-pointfirearms.com

One thing to be said, if you settle on a Vector as your 10mm carbine, you’ll likely have the most unique gun at the range. Not to mention, perhaps one of the most advanced PPC systems available.

Behind the Buck Rodger’s design, the gun has some top-end engineering, which starts with its blow-back system. What Kriss calls its Super V System, the non-linear bolt travel directs energy down, not only reducing felt recoil, but also mitigating muzzle lift. This is further aided by the Vector’s low bore axis, easily seen in the gun’s profile. Certainly, it’s a step away from the ordinary, but once you have one in your hands you find out so it’s performance—particularly when you press on the accelerator a bit. You can pick up the pace with the Vector, accurately so.

As unorthodox as the Vector appears, the PPC is very intuitive to run. Your support hand operates the bolt and mag release, while your strong hand manages the safety and, obviously, the trigger. Other notables include Glock magazine compatibility, top Picatinny rail and tool-less takedown (just pop for pins). It’s on the spendy side, but if you’re aiming for a high-performance PPC the Vector is hard to beat.
MSRP: $1,499, kriss-usa.com

A PPC specialist, JRC has earned a dedicated following over the years with well-made long-guns. Its 10mm carbines are no exception. And while both the gunmaker’s Keymod and Takedown models are both solid options, the latter is eminently more useful. Broken down, the carbine is a tidy 16-inch long, 6-pound package, which is to say it has the potential to be your constant companion.

Constructed around a single piece aircraft-grade aluminum, the Takedown 10mm is extremely robust and nearly impervious to outside grit and grim. Of course, it’s a simple blowback system, which means the action is stiff, slowing manipulation down a hair. At the same tick, it will run through anything you feed it, which is ideal in a utility carbine. Given it accepts Glock magazines, you have plenty of capacity options at your disposal.

In addition to this, JRC has included some other intriguing features to make it handy no matter the circumstances: reversible ejection, top rail for the addition of an optic and standard AR-15 controls. Overall, JRC gives you a do-all carbine you can always keep at hand.
MSRP: $599, justrightcarbines.com

One of the only true AR-style options available in 10mm, the K10 stands alone. Aside from familiar controls and the ability to upgrade, the 16-inch barrel carbine has another desirable asset in this chambering—it’s extremely mild to shoot. At 6.75 pounds, the gun has enough heft to eat away at recoil, thus makes it quite quick shot to shot.

Olympic Arms broke from the typical PPC design with the simple blowback K10, opting for a proprietary magazine design. On the downside, it limits your options and they’re not exactly cheap either. On the up, the unique system somewhat mimics a standard AR magazine—at least in size.

Outside of its chambering and magazine, the K10 is along the lines of what you’d expect out of an entry-level AR. This includes a basic polymer handguard, A2-style front sight, carrying handle, A2 flash suppressor and M4 6-position buttstock. No big shakes. But if you live and die ARs and need one in 10mm, this is one of your only options short of building your own.
MSRP: $1,006, olyarms.com