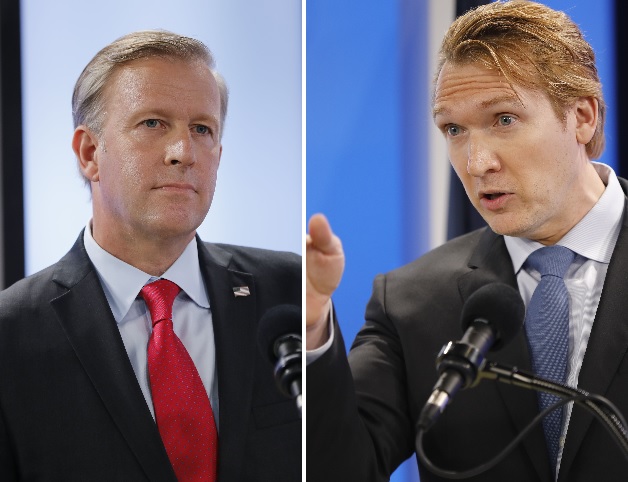 Republican Christopher L. Jacobs and Democrat Nate McMurray clashed in a debate Tuesday over proposed police reforms, the response to the Covid-19 pandemic and who best represents the values of New York’s 27th congressional district, where a special election will take place later this month.

Jacobs, a state senator, offered strong support for President Trump’s policies and blasted McMurray as a “radical leftist” in the mold of House Speaker Nancy Pelosi and Sen. Bernie Sanders.

“Those are the people he aligns with,” Jacobs said, during the contentious one-hour debate Tuesday night hosted by WIVB-TV.

McMurray, the former Grand Island town supervisor, ripped Jacobs as a political opportunist too wealthy to relate to residents of the largely rural district and said Jacobs wouldn’t stand up to Trump or GOP leaders.

“He is someone who will say anything to stay in office,” said McMurray.

Jacobs and McMurray are squaring off in a June 23 special election to fill the unexpired portion of former Rep. Chris Collins’ term.

The 27th congressional district, which runs from Hamburg east to the Finger Lakes, is the reddest congressional district in New York. The seat has been vacant since Collins resigned from office in September, shortly before pleading guilty in federal court for his role in an insider trading scheme.

Nearly all of the questions at Tuesday’s debate addressed the protests and calls for police reforms sparked by the death of George Floyd while in police custody and the Covid-19 pandemic.

Both Jacobs and McMurray condemned the killing and said they want the Minneapolis police officer accused of murdering Floyd brought to justice.

But Jacobs defended the vast majority of police officers as pursuing their jobs with the best of intentions and said too many peaceful protests were “hijacked by radicals.”

McMurray said he opposes violence and supports the police but the need for fundamental change to our criminal justice system is clear and any notion of quelling protests with the military is unconstitutional.

“That’s what tyrannies do,” the Democrat said.

McMurray condemned a tweet from the president earlier Tuesday that accused Martin Gugino, the 75-year-old who was shoved and injured by Buffalo police last week, of being an “antifa provocateur” and suggested the incident was a “set-up.”

McMurray prodded Jacobs to say whether he agreed with Trump’s claim.

Jacobs cited Buffalo Mayor Byron Brown’s initial characterization of Gugino as an “agitator” and added, “I think we need to get to the bottom of this.” He also said he didn’t believe the two officers who shoved Gugino should be charged with felonies because they didn’t intend to hurt him.

Jacobs said he voted to ban police choke holds in New York but he did not support legislation meant to give the public more access to law enforcement discipline records, saying the change would benefit trial lawyers without preventing incidents such as Floyd’s killing.

McMurray said he supports the measure and accused Jacobs of following the party line in rejecting it.

The two men also fought over the response to the coronavirus outbreak.

Jacobs pointed to the federal loan program intended to help small businesses as one of the best examples of the government’s efforts to keep the economy afloat.

He said the surprisingly improved unemployment figures from last week show the nation’s economy under the president is fundamentally strong.

“We’ve got to get working again,” Jacobs said.

He said he’s open to additional federal pandemic aid but he said he doesn’t want any to subsidize what he considers a mismanaged New York state government.

McMurray said he supports direct aid to local and state governments, he wants enhanced unemployment benefits extended and he criticized earlier pandemic stimulus that he said went to the wealthiest Americans and corporations.

Jacobs said McMurray has criticized both the National Rifle Association and supporters of the Second Amendment, while McMurray said he is a longtime gun owner.

“He is literally making stuff up,” McMurray said at one point, while Jacobs said he would post online evidence from McMurray’s Twitter feed.

The special election originally was set for April 28 but was moved to June 23 because of the Covid-19 outbreak.

On the same day as the special election, Republicans in the 27th district will vote in a primary to select the GOP candidate in November’s general election for a full, two-year term that begins in January.

In the primary, Jacobs is squaring off against Beth A. Parlato, a family law attorney and a former Darien town justice, and Erie County Comptroller Stefan I. Mychajliw. The winner will face McMurray this fall.