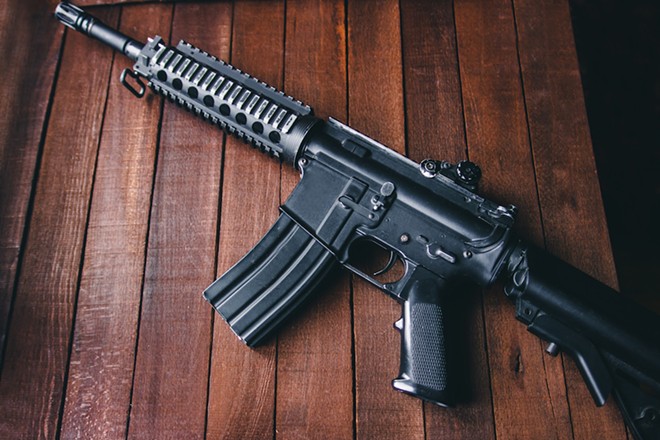 The Florida Supreme Court ruled Thursday that a proposed constitutional amendment seeking to ban possession of assault-style weapons does not meet requirements to go before voters.

Supporters of the Ban Assault Weapons NOW initiative did not submit enough petition signatures to make it on the 2020 ballot but needed support from the Supreme Court to go before voters in 2022. The group began the initiative after 17 people were killed in the 2018 mass shooting at Parkland’s Marjory Stoneman Douglas High School.

Attorney General Ashley Moody, the National Rifle Association and the National Shooting Sports Foundation opposed the measure at the Supreme Court, while national gun-control groups such as Brady and several South Florida cities backed the proposal.

The Supreme Court plays a key role in the ballot-initiative process. It reviews initiatives to determine whether ballot titles and summaries —- the wording that voters would see at polling places —- meet legal requirements. It does not decide on the merits of the initiatives.

Thursday’s 4-1 decision focused on part of the ballot summary that said the initiative “exempts and requires registration of assault weapons lawfully possessed prior to this provision’s effective date.”

The court majority, made up of Chief Justice Charles Canady and justices Ricky Polston, Alan Lawson and Carlos Muniz, said that provision “affirmatively misleads voters regarding the exemption” because of a contradiction with the broader text of the proposed constitutional amendment.

The contradiction involves whether the exemption would apply to weapons or to the people who possess the weapons. The distinction could be important, for instance, if a gun owner dies.

The four justices rejected arguments by the measure’s supporters that voters would understand that owners’ possession of the firearms, and not the weapon, would be exempt.

During oral arguments in February, Jon Mills, an attorney for Ban Assault Weapons NOW, said the exemption would apply to people who have the guns.

He said “possession is the continual issue. It does not make sense to say that a weapon lawfully possessed itself.”

But the ballot proposal “misleads voters to believe that any lawfully possessed assault weapons will continue to remain lawful,” the majority wrote.

But Justice Jorge Labarga disagreed with the majority, writing in a dissent that “the ballot summary clearly summarizes the content of the proposed amendment.”

The language objected to by the majority “is not affirmatively misleading,” Labarga wrote.

“In fact, the language is accurate, and the majority simply concludes that the language is insufficiently narrow,” he added. “The ballot title and summary provide fair notice and equip voters to educate themselves about the details of the initiative. Consequently, the initiative should be placed on the ballot.”

Labarga is the lone justice remaining on the court who was part of a more liberal-leaning bloc of jurists that controlled the court for years. After reaching a mandatory retirement age, justices Barbara Pariente, R. Fred Lewis and Peggy Quince were forced to step down as Republican Gov. Ron DeSantis took office in January 2019 Since then, DeSantis, a Harvard Law School graduate, has cemented a conservative majority on the court by appointing justices who share his ideology.

The Ban Assault Weapons NOW initiative emerged in the aftermath of the Feb. 14, 2018 mass shooting at Marjory Stoneman Douglas High School. Nikolas Cruz, who was 19 at the time of the shooting, is accused of using a semi-automatic weapon to gun down 14 students and three faculty members at his former school.

Gail Schwartz, the chairwoman of the political committee behind the proposal, is the aunt of Alex Schachter, who was among the students slain during the school shooting.

“The Supreme Court, now controlled by the NRA in the same way as our governor and our Legislature, has fundamentally failed the people of Florida,” Schwartz said in a prepared statement Thursday.

The court’s rejection of the amendment “does not change our commitment to rid Florida of these killing machines,” she added.

“After striving for two years for a safer state for our families, we’re just getting started,” Schwartz said.

But George Levesque, an attorney for the NRA, praised the Supreme Court decision.

“I think it is a huge victory for those who enjoy their 2nd Amendment rights,” Levesque sad. “But it is also a victory for the people of Florida, in terms of making sure that when they are asked to amend their Constitution, they are going to get an accurate description of what the amendment does.”

_
Please follow CDC guidelines and Orange County advisories to stay safe, and please support this free publication. Our small but mighty team is working tirelessly to bring you news on how coronavirus is affecting Central Florida. Please consider making a one-time or monthly donation. Every little bit helps.