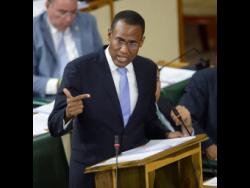 The challenge of advancing in an integrated world requires climbing the ladder of development and keeping apace with changing international standards.

Over the past few decades, the modern international financial system has supported the growth of international trade and commerce that have lifted hundreds of millions out of poverty around the world. The openness of this system makes it susceptible to abuse in organised crime and by terrorists and other persons with ill-intent. As a result, increasingly, participation in this international financial system requires implementation and maintenance of common anti-money laundering and countering of financing of terrorism and the proliferation of weapons of mass destruction (AML/CFT/PF) standards. Countries of the Caribbean, including Jamaica, have struggled with this over time.

The Sunday Gleaner recently had a chat with Finance Minister Dr Nigel Clarke in light of Jamaica being recently placed on an EU financial blacklist of countries that have been accused of being too soft on money laundering.

Back in February, Jamaica was among seven countries that were placed on a grey list by the Financial Action Task Force (FATF) for gaps or failures in stemming the financing of terrorist groups or money laundering.

Sunday Gleaner: Why did the Financial Action Task Force (FATF) change, in how it measures the size of financial assets in a country, have an unjust impact on Jamaica?

Finance minister: If a country has strategic AML/CFT deficiencies, as many do, and its financial assets are deemed to be smaller than the threshold of US$5 billion, then its AML/CFT reforms are monitored by its regional AML/CFT body, in the case of Jamaica that would be Caribbean Financial Action Task Force (CFATF). Until recently, this has been the case for Jamaica, up to the end of 2019, as our financial assets were deemed to be less than US$5 billion.

If, however, a country has the same strategic AML/CFC deficiencies, and its financial assets are instead deemed to be larger than the threshold of US$5 billion, the country’s financial sector is seen as large enough, in an international context, to warrant the direct, enhanced monitoring of the international body FATF – a process commonly known as grey-listing. (And, once FATF ‘grey-lists’ a country, EU parliamentary law requires that the European Commission puts that country on a list that others derogatorily referred to as a ‘blacklist’).

Now, a critical factor in Jamaica’s FATF listing is that FATF suddenly changed the variable used to measure the size of financial assets from M2 to M3, which is a broader measure that yields higher values, without a corresponding increase in the US$5 billion nominal threshold. And, this consequential change happened a mere six months before the assessment date.

Now, Jamaica, like other developing countries, has real and serious capacity constraints and very limited technical resources that have to be deployed strategically to address our many challenges. What you find is that it is the same set of individuals in our key public sector institutions who work on key issues, and so a country like Jamaica has to delicately allocate these resources, according to the outcomes being pursued.

That is the effect of what FATF did in February 2019 by changing the national financial asset size measurement with an assessment date of October 2019. It had an unjust effect on Jamaica. Had that change been made at the start of the 800m, other matters could have been deferred and we would likely have had a different result on this front.

What would you say is the biggest challenge in dealing with the particular issue and why?

Having an effective anti-money laundering and counter-financing of terrorism and proliferation (AML/CFT/PF) framework requires erecting fences, with alarms, around the financial system, broadly speaking, that are difficult for those will ill-gotten gains to penetrate and use that system. However, that fence is only as strong as its weakest link.

We are doing reasonably well with the deposit taking financial system, where the ‘fences’ and ‘alarm systems’ are working. However, the non-financial businesses and professions, which represent an outer fence, are riddled with strategic weaknesses. Its far too easy for those with ill-gotten gains to transact in real estate, acquire cars and jewelry, participate in gaming, and channel funds through unregulated money-lending institutions without any alarms being triggered.

The biggest challenge is getting the citizen, the business, the professional to understand why some of the measures required to address these weaknesses – which seem inconvenient, costly and intrusive at first ­­– are for our own collective good.

It is also important to understand the legitimate concern of trading partners as, without appropriate filters, strategic weaknesses in the AML/CFT/PF framework of a country can be leveraged by malevolent actors to eventually enter and access the financial system of a trading partner.

If there was one thing the public should know about this issue, what would it be?

I would want the public to understand their own collective self-interest in this matter. We need an effective AML/CFT/PF framework for our own benefit and not because some international body or some other powerful country says so. An effective AML/CFT/PF framework is in the individual interest of every Jamaican and in the national interest of us all.

The primary purpose of organised crime is profit. If that profit cannot easily be deposited in (or transferred to) a bank or credit union, and cannot be easily used to purchase real estate, cars, jewellery, nor to gamble or to make loans and cash transactions above certain thresholds; if these things are unacceptable in our economy, then it is more difficult for organised crime to operate, grow and expand.

Once there is an appreciation of our own collective self-interest, it makes it easier for our professionals and business people to understand why certain measures that may seem inconvenient are absolutely necessary.

Some say Jamaica has not been forceful enough in dealing with some of the issues we face with this money laundering issue. How would you respond?

That would be a very simplistic and inaccurate assessment. This is about detail and not soundbites. The mutual evaluation report on deficiencies in Jamaica’s AML/CFT regime based on 2015 state of play was published in 2017. It is nearly 100 pages long.

If the requirement was legislation only, we would be okay. Some of the legislation enacted over the period since 2016 include:

• Banking Services Act was brought into effect in July 2017

The passage of these pieces of legislation greatly improved Jamaica’s compliance with FATF recommendations. However, building an effective AML/CFT regime is not merely about passing laws; it’s about using those laws. It’s about, for example, building the capacity in designated private sector professions and businesses as well as in the public sector to collect data and to report on suspicious activity. In addition, it’s about having the expertise and capacity to professionally investigate, and prosecute AML/CFT infringements as necessary.

Some of the non-legislative activity includes:

• National Risk Assessment of AML/CFT risks was completed, approved by Cabinet and disseminated to the private sector in 2016.

• All 52 United Nations designations received in the period 2017-2019 led to court orders that made these designations effective under Jamaican law.

• Jamaica’s use of avenues for international cooperation in domestic money-laundering cases and cases being pursued by foreign jurisdictions is consistent with FATF expectations.

• Over 115 persons have been charged with money-laundering offences over the past 4 years, far higher than the preceding four years.

• Over 2500 law enforcement personnel have been trained in areas of AML/CFT over the past four years including 1622 police officers and 652 investigators.

• MOU to share data between FSC and BOJ completed.

Where we fall woefully short is in the area of designated non-financial businesses and professions: legal, accounting, real estate, car dealerships, jewelry, gaming, etc. There has been very limited activity in the area of AML/CFT supervision in these professions and businesses. This is where our most significant gaps are and where we have to build capacity and ramp up.

However, none of this is a box-checking exercise. FATF looks into the details. An example of detail:

• Jamaica completed its National Risk Assessment (“NRA”) in 2016. However, in reviewing Jamaica’s progress in October 2019 FATF indicated that the NRA did not include sufficient data from the non-profit sector and from non-financial businesses and professions. We therefore have to do it again. More importantly, we must keep the National Risk Assessment up-to-date so that we can know if and when the AML/CFT risks in the country are changing so that we can have a strategic response. This requires ongoing provision of data from non-financial businesses and professions. I would like to stress here that if we do not get this data from non-financial businesses and professions and include it in our National Risk Assessment, Jamaica will not be removed from the FATF list.

• Jamaica updated its Companies Act in 2017, as was required, to make mandatory, annual disclosure of beneficial ownership for shareholding of 50% or more in a company. FATF’s view was that this should be a lower threshold like 20%, which is seen as an international standard. This information must be accurate and up-to-date with sanctions for non-compliance. So even though FATF recognised beneficial ownership improvements, for example, with respect to life insurance contracts, there is more that needs to be done.

How can we get buy-in from the non-financial sector players to play their part in helping to deal with issues currently being faced by Jamaica?

We need to build greater public awareness and understanding of why this is important, how they can help improve the effectiveness of our AML/CFT regime and the grave domestic and international consequences of not doing so. It’s hard for the lawyers or accountants or car dealers or other professional practising in the proverbial “hills of Clarendon”, who never do work with an international dimension, to understand why they should be having clients fill out “intrusive and complicated” forms and furthermore why they should be required to make submissions on suspicious transactions.

What ministries, agencies and departments are involved in helping to strengthen the current framework?

Improving our AML/CFT regime requires coordination of many public and private sector institutions.

• The MOFPS is to amend the tabled micro-credit legislation and take it through the parliament.

• The Bank of Jamaica and the FID are jointly finalizing the updated National Risk Assessment.

• The Ministry of National Security is responsible for bringing all designated non-financial businesses and professions under the Proceeds of Crime Act and related regimes.

• The Ministry of Industry, Commerce, Agriculture and Fisheries is required to again update the Companies Act on beneficial ownership, to update laws on the operation of non-profit sector and ensure adequate risk-based supervision of this sector with respect to AML/CFT risks.

• Of course, the Attorney General’s Chambers and the Ministry of Justice, through the Chief Parliamentary Counsel, play absolutely indispensable roles in advancing related legislation.

• Various law enforcement agencies – DPP, MOCA, FID are required to continue to make use of financial intelligence and money-laundering offences in the prosecution of crime.

• The BOJ and the FSC as Competent Authorities are responsible for continuing the AML/CFT risk-based supervision of the financial sector. BOJ has responsibility for the supervision of deposit taking institutions and bank financial holding companies while the FSC has responsibility for securities dealers, insurers and pension fund managers who also have to be AML/CFT compliant.

• Regulatory bodies of all designated non-financial businesses and professions – lawyers (subject to court decision), accountants, real estate agents, jewelry, gaming – will need to work to build the capacity that allows for risk-based approach to identifying money-laundering risks and reporting on suspicious activity.

Over the next 10 years, where do you envisage seeing Jamaican antimony laundering framework?

Long before that, I see Jamaica’s AML/CFT and proliferation financing (PF) framework being effective in preventing abuse by criminals and in line with or exceeding international standards.