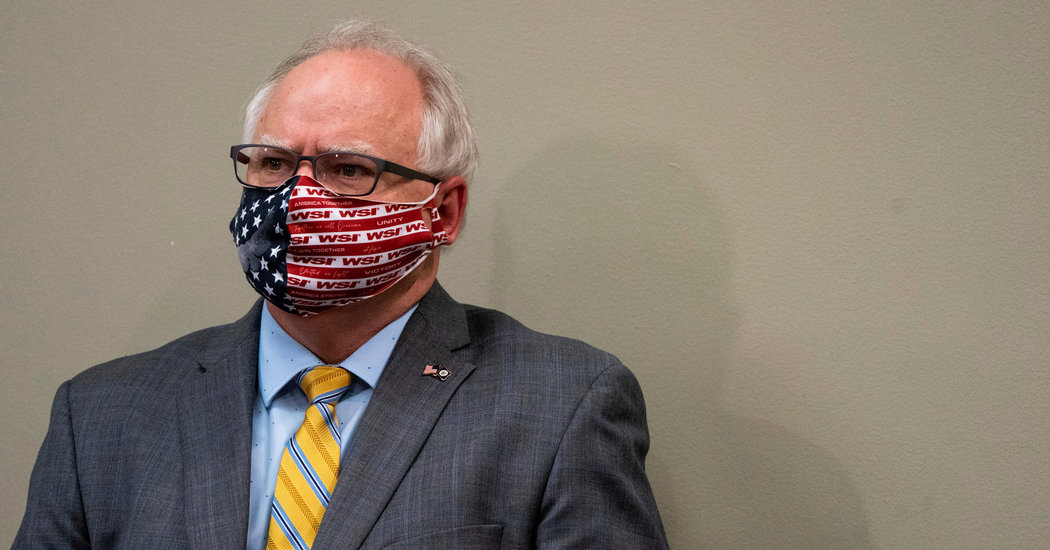 With the eyes of a burning city and rattled nation on him, Gov. Tim Walz of Minnesota tried on Friday to channel the anger of a community enraged over the death of George Floyd at the hands of the police.

“The ashes are symbolic of decades and generations of pain, of anguish, unheard,” Mr. Walz said, looking visibly shaken at a news conference in St. Paul.

Gesticulating forcefully out of evident frustration, the governor called Mr. Floyd’s death on Monday, and the smoldering unrest in Minneapolis that has followed it, “one of our darkest chapters.” Mr. Floyd, 46, died after a police officer pressed his knee down on Mr. Floyd’s neck for about eight minutes.

Friday’s news conference was a critical moment in the national spotlight for Mr. Walz, a Democrat, the morning after peaceful protests against the Minneapolis Police Department turned into looting and firebombing that burned down a police precinct.

In an unusual turn of events, a governor who spent 24 years in the Army National Guard before retiring in 2005 found himself on Thursday having to deploy the Guard to keep the peace.

“I understand clearly there is no trust in many of our communities,” he said. “And I will not patronize you as a white man without living those lived experiences about how very difficult that is. But I’m asking you to help us: Help us use a humane way to get the streets to a place where we can restore the justice.”

Mr. Walz also apologized for the arrest of a CNN news crew by the Minnesota State Patrol early on Friday morning, calling their detention “inexcusable.”

“I failed you last night,” he said of the press.

The local authorities should have been better prepared to maintain order, and state law enforcement should have stepped in sooner when it became obvious that matters on the street had turned chaotic, Mr. Walz said. He blamed the violence on “anarchists.”

Mr. Walz, 56, was elected in 2018 after having represented a rural district in southwestern Minnesota in the House of Representatives for more than a decade. The district eventually became so conservative that Mr. Walz had to reinvent himself as a more progressive Democrat to run for governor.

Nowhere was his policy shift more clear than on guns. As a congressman, he had an “A” rating from the National Rifle Association. As a candidate for governor, he embraced some gun control measures — while arguing that he could still appeal to rural Minnesotans and bring them back to the Democratic Party.