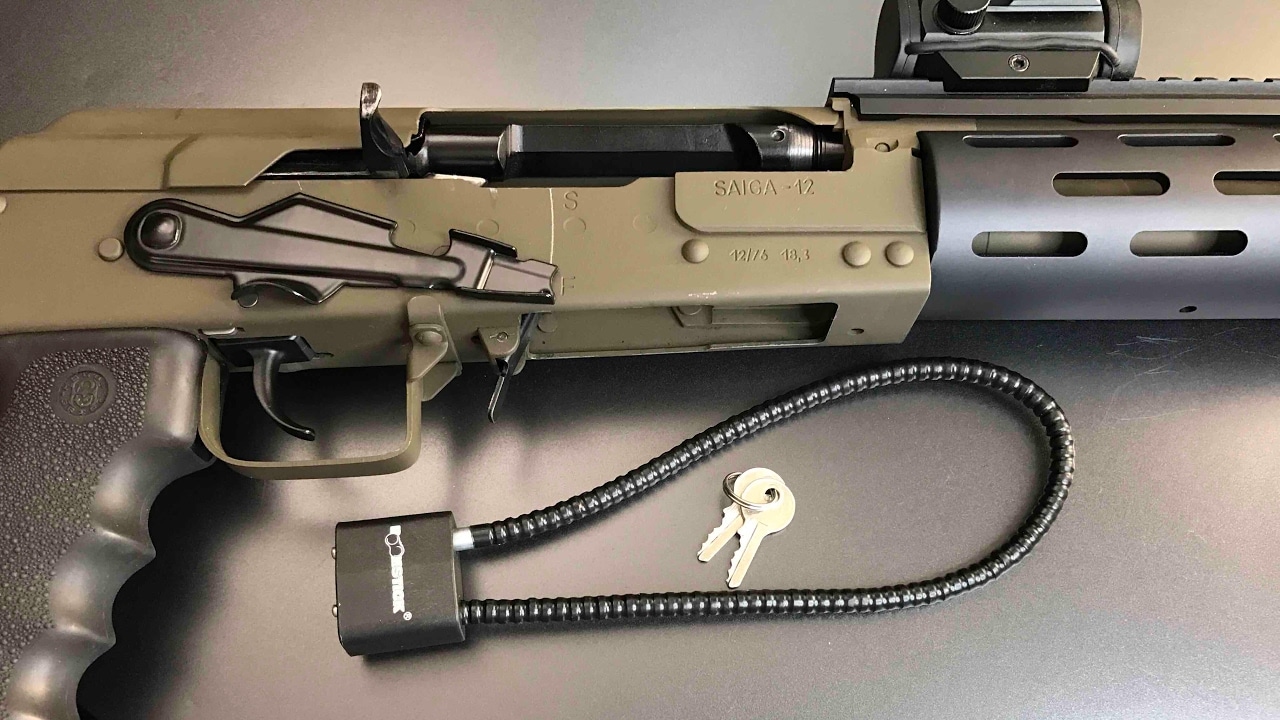 As a gun owner, your number one responsibility is the safe and secure storage of your firearm. There are multiple ways to keep your weapon safe.  A frequent debate among gun owners is that of the trigger lock vs. the cable lock.

Read below to see pros and cons of trigger lock vs. cable lock to find out which lock is best for you.

It can also be in the form of a large padlock that locks the action. Trigger locks are not designed to be used on loaded guns.

Trigger locks are an inexpensive security option and are available with either a keyed lock or combination lock.

There are a few positives that come with using a trigger lock on your weapon.  First, a trigger lock is an inexpensive start to gun safety. They are typically extremely affordable, and fit any weapon, no matter the type or size. In fact, many firearms come with a trigger lock as part of your purchase.

While a trigger lock may not be the safest of all the options out there, it will definitely dissuade someone from using your weapon.  A trigger lock is not super easy to remove, so if someone wants to get to your gun, they will have a difficult task ahead of them.

Another important positive of using a trigger lock is that is provides a certain level of protection from an accidental discharge.  If you have a family, and want to keep your children safe, a trigger lock is the first step in the right direction.  A child who happens upon your gun will be unable to use it with a trigger lock system engaged.

Another setback of the trigger lock is that it takes a little bit of time to dismantle.  If you use a trigger lock on your weapon, and you find yourself in an emergency situation, it could take you a little too long to remove so that you can use your weapon.  In a do-or-die situation, this amount of time could be all the difference.

Lastly, while a trigger lock is able to deter a child from breaking into your weapon, it does not necessarily do the same for others.  Anyone that is older than a child would be able to break into and dismantle this lock with a little bit of effort and a drill.

A cable lock is another simple and inexpensive option for gun safety. A cable lock is a cable that goes through your weapon, and prevents it from being fired by blocking the barrel or the use of ammunition.

Typically, this cable is covered in some sort of safety material: rubber, plastic, or nylon. This type of lock is also easy to use.

To install, all you have to do is turn the safety on, and then thread the cable into the barrel, chamber, magazine, and then into the padlock.

Luckily, cable locks are an inexpensive lock for your firearm. They can be purchased anywhere you can purchase a weapon, so they are very accessible as well.  Because of its price, a cable lock is a great option for someone who has multiple weapons at home.

In many pistol and rifle designs, the cable lock prevents the insertion of magazines.  This is a positive because it ensures that the gun will not be loaded when stored, thus making it safer.  This design of cable lock does not work, however, with a weapon whose magazine is internal, or fixed.

Just like a trigger lock, a cable lock is a great first step for gun security.  It will dissuade a person from stealing or tampering with your weapon.  Especially someone who isn’t particularly looking for your weapon and just happens upon it.  This type of lock will also prevent a small child from accidentally discharging your weapon.

First and foremost, a cable lock is easy to tamper with.  While it will prevent a small child from discharging your weapon, it will not prevent a determined adult or older child.  The lock on a cable lock and be pretty easily picked, or wire cutters can be used to cut the wire and remove the lock.

Also on the negative side, there is not a one-size-fits-all cable lock.  You have to find a cable lock that fits your weapon specifically. Also, they do not work with every type of firearm.  A cable lock is not long enough to work on a shotgun, for example.

Which one is best?

In the end, neither a trigger lock or a cable lock should be your only form of safety for your firearm. These external locking devices are meant to stop small children only. They can be a great deterrent for children, but are easy to tamper with and remove with some effort.

Whether choosing trigger lock vs. cable lock, either should be your first form of defense when it comes to gun safety. If you truly want to keep your firearm, and your family, safe, then you should consider a gun safe.