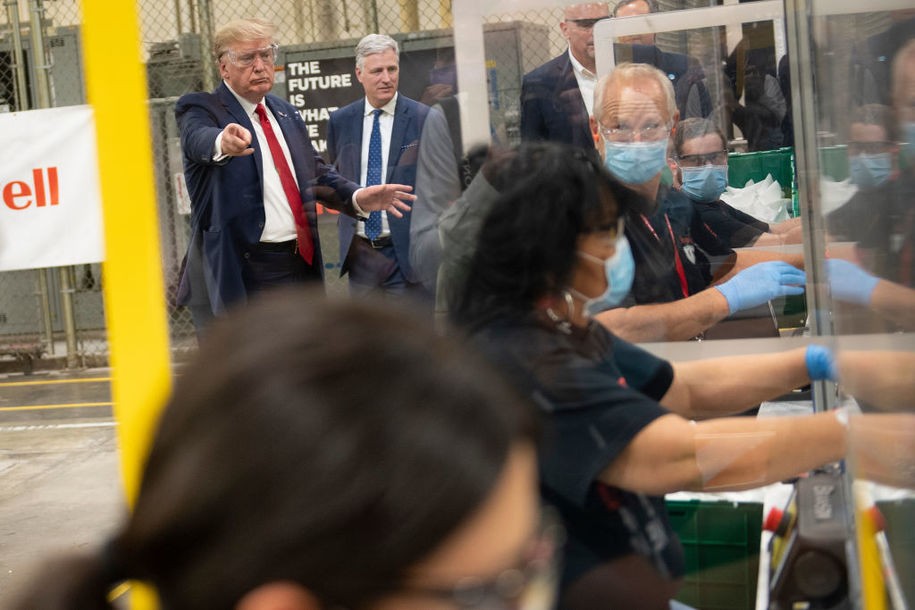 • A personal valet to Donald Trump, a member of the U.S. Navy, has tested positive for COVID-19. The valet reportedly works in close contact with Trump, bringing him his food and Diet Cokes. Trump was reportedly furious upon learning of the infection; despite a known virus hotspot at Trump’s Mar-a-Lago resort and “home,” the White House continues to insist Trump has never tested positive for the virus.

• The White House today again dismissed the need for Americans to have access to testing before returning to their workplaces, saying the “notion that everyone needs to be tested is just simply nonsensical.”

• A newly leaked Pentagon document states that a positive test result for COVID-19 will be “permanently disqualifying” from military service.

• Centers of Disease Control and Prevention experts who compiled a 17-page outline for how to safely reopen American businesses were told their report “would never see the light of day” after the White House objected to releasing it, claiming that providing such guidance was a “slippery slope.” The slope to what is unclear, but the CDC’s detailed advice was promptly leaked to the press.

• The “reopening” of Georgia restaurants and other service businesses has resulted in more than 60,000 more out-of-state visitors per day, most from neighboring states, according to a University of Maryland analysis of anonymized smartphone data. This is likely to further increase virus spread in the region.

• Meat processing plants continue to be epicenters for COVID-19 outbreaks. The Trump administration is vowing to keep those plants open, with Health and Human Services Secretary Alex Azar claiming to lawmakers that the meat processing employees are getting sick not due to their workplace, but their “home and social lives.”

• Anti-immigration Republican senators are calling on the administration to suspend guest worker visas through the pandemic, including H-2B nonagricultural visas. While the idea is popular with Stephen Miller and other Trump aides, it is not likely to get very far: Trump’s own properties rely heavily on H-2B workers.

• The California Supreme Court denied a Republican-led effort to block disaster assistance funds intended to assist undocumented state residents who have been left out of federal pandemic relief efforts.

• Senate Intelligence Committee chairman Richard Burr was previously disclosed to have dumped up to $1.5 million of his own stock holdings in February after receiving private government briefings on the potential severity of the COVID-19 pandemic. A new report now identifies Burr’s brother-in-law, himself a Trump administration official, as selling up to $280,000 worth of shares on the same day.

• A 58-year-old Salvadoran man who had lived in the United States since 1980 became the first Immigration and Customs Enforcement detainee to die of COVID-19 while in custody. Carlos Ernesto Escobar Mejia was held in the Otay Mesa Detention facility, a privately run detention center that has become a COVID-19 hotspot.

• An armed society continues to not be as polite as the National Rifle Association has insisted it would be: Three McDonald’s employees in Oklahoma City were shot by a 32-year-old female customer who, when told the interior dining room was closed due to the pandemic, became enraged and returned with a handgun. All are expected to recover; the shooter is in custody.

• The “Swedish experiment,” which avoided national shelter-in-place orders, has resulted in both far more deaths than in neighboring countries and economic damage similar to or worse than European countries that issued those orders. This seems solid evidence against the notion that sacrificing additional citizens for a quicker “reopening” would result in a measurable economic boost after all.

• German Chancellor Angela Merkel, however, says Germany has now “reached the goal of slowing the virus” and can now begin further easing of nationwide lockdown restrictions. Germany implemented both widespread testing and aggressive contact tracing in order to limit virus transmission; those efforts, which continue, have resulted in decreasing infection rates even after the initial easing of lockdown orders two weeks ago.

• Trump celebrated National Nurses Day by suggesting a nurse was lying when she told Trump the availability of masks and other protective equipment remained “sporadic.”

• A Fox News host called for viewers to risk COVID-19 infection, saying “herd immunity is our friend” and that “healthy people” are “going to have to have some courage.” Host Pete Hegseth made his comments from a home studio; Fox News has closed much of its studios to avoid infecting its hosts and other employees.