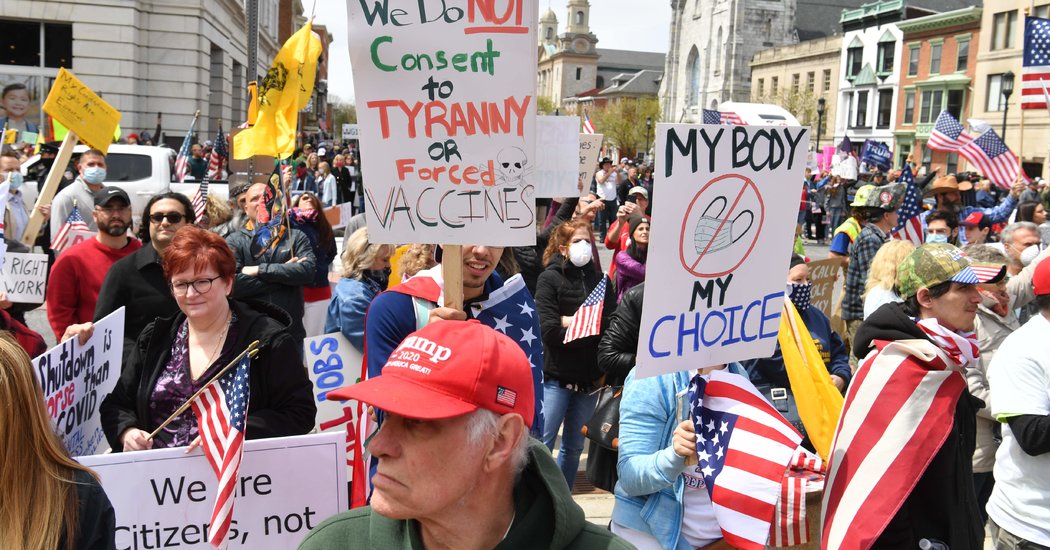 This is what it looks like when a pandemic collides with the culture wars in America.

The mayor of Louisville, Ky., warned churches that holding services on Easter Sunday would defy the city’s social distancing guidelines. Mitch McConnell, the Kentucky Republican and Senate majority leader, answered with a stern letter, arguing, “Religious people should not be singled out for disfavored treatment.”

The Democratic governor in Michigan extended bans on certain outdoor activities to include using motorboats. Conservatives called her an authoritarian and caricatured her move as a slap at people who enjoy the outdoors. “You can’t go fishing,” a local activist lamented in an interview on “Fox & Friends.”

And even though firearms stores remain free to do business in most of the country, the National Rifle Association has a stark message for gun owners. “They want your guns. They want ’em all,” declared the country music legend Charlie Daniels in a promotional video he recorded for the N.R.A. from quarantine at his home in Tennessee.

The new patchwork of state and local policies designed to flatten the spread of the coronavirus is inflaming old passions over some of the most contentious issues in politics. Guns, abortion, voting rights and religious expression — concerns that would seem to have little to do with a virus that has sickened millions of Americans and killed more than 37,000 — have emerged as fault lines in the debate over how government is responding to the crisis.

President Trump does on occasion speak about the importance of social distancing, as he did on Monday, but he is also encouraging discontent, seeing it as a source of raw emotion he can tap as protesters across the country wave “Trump 2020” flags and demand that the country reopen. With messages last week to his Twitter followers to “LIBERATE” states where residents are now under orders to limit their movement — specifically, Michigan, Minnesota and Virginia, all led by Democratic governors — he is feeding what conservatives described as a rising sense of restlessness on the right.

“There’s a tremendous amount of social unrest,” said Jeff Landry, the Republican attorney general of Louisiana and an ally of Mr. Trump. “Governors who are using the pandemic as an excuse to keep certain measures in place do so at their own peril.”

For now, Mr. Trump is speaking to the minority of Americans who believe the government has gone too far in trying to contain the threat from the virus. And he is doing so by spreading misinformation and innuendo about how the restrictions affect issues like gun ownership and freedom of worship. He falsely claimed last week, for instance, that the Second Amendment was under threat in Virginia.

Over the weekend he made unfounded insinuations that Muslims celebrating Ramadan, which begins this week, would not be subject to the same social distancing limitations as Christians were on Easter just over a week ago. “I’ve seen a great disparity in this country,” he said. “They go after Christian churches, but they don’t tend to go after mosques.”

So far, a mass uprising seems unlikely. Many of the demonstrations, like one in Denver on Sunday, have drawn only a few hundred people. Larger gatherings, like one at the State Capitol in Lansing, Mich., last week, attracted far-right activists and militia sympathizers, some of whom had semiautomatic rifles slung over their shoulders.

The White House’s own current guidelines reflect what most epidemiologists say: Social distancing, limiting personal contact and wearing masks in public are all crucial to keeping the virus in check. Medical experts, including those advising Mr. Trump, have warned that easing these guidelines could lead to a surge in new infections.

But some conservatives who support the president’s re-election campaign said they believed that many Americans are growing frustrated with the orders that keep them from socializing, working and worshiping normally. The White House is closely tracking those concerns, and has made Mr. Trump and Vice President Mike Pence available on several conference calls with faith leaders to assure them the administration is listening. And after a Mississippi church was penalized for holding drive-in services in defiance of a local order, Attorney General William P. Barr lent his support, saying that congregants’ First Amendment rights were being infringed.

“My sense is that this is a caldron,” said Ralph Reed, the founder of the Faith and Freedom Coalition and a veteran organizer of the religious right. “It is simply unsustainable to tell people that they have to sit helplessly in their homes watching their businesses go bankrupt, their jobs disappear and their lives destroyed.”

Pointing to a recent survey from the right-leaning American Enterprise Institute that found nearly 90 percent of houses of worship in the country were no longer offering services as usual, Mr. Reed said that there were growing questions among religious conservatives, like “why liquor stores and grocery stores can be open, but their churches are closed.” Mr. Reed added that while he thought most people were still willing to stay home, he saw patience fraying.

Speaking of Democrats, he said, “If they’re not careful, they will take what they think is going to be a referendum on Donald Trump and turn it into a referendum on the denial of basic freedoms and liberties.”

While tensions have flared in the last week, competing political agendas have shaped how leaders approached the enforcement of coronavirus-related restrictions in the past month.

Texas, in particular, has been a laboratory for a conservative pandemic response. Like Ohio, Alabama and a few other states with Republican leadership, Texas initially included abortion among the elective medical procedures it said would have to wait until after the immediate threat of the virus had passed. And as the state started ordering the closure of schools and nonessential businesses late last month, the Republican attorney general, Ken Paxton, warned abortion providers that they would be “met with the full force of the law” if they did not stop operating.

The restriction amounted to “an abuse of power and part of an ongoing effort to use sham justifications to shut down clinics and make an end run around Roe v. Wade,” said Nancy Northup, president of the Center for Reproductive Rights, one of the groups that sued Texas. Clinics remain closed and the governor has said he will leave it up to the courts to decide whether the easing of restrictions on some medical procedures, set to take effect Wednesday, applies to abortions.

Four days after his admonition to abortion clinics, Mr. Paxton issued an opinion on an unrelated but equally fraught culture war issue, declaring that emergency stay-at-home orders could not be used to force the closure of firearms stores in the state.

The public policy decisions there differ strikingly from states like New York, where Gov. Andrew M. Cuomo has declared gun stores to be nonessential businesses. The move prompted a lawsuit from the N.R.A., which is challenging similar actions by lawmakers in New Mexico and California. Conservatives, Mr. Landry said, see these as examples of how “Democrats have basically leveraged this thing to get what they want.”

On other issues ranging from property rights to prison policy, Texas has been at the front lines of the escalating clash between left and right. Conservatives have opposed local efforts to prevent second homeowners from going to their properties and to expand access to voting by mail, which is limited to certain populations like older people and those with disabilities.

The American Civil Liberties Union sued after Gov. Greg Abbott issued an order preventing the release of some inmates at risk of contracting the virus. Mr. Abbott said releasing “dangerous criminals” put the community at risk because it “slows our ability to respond to the disaster caused by Covid-19.” A state court disagreed and temporarily blocked the governor’s order. The A.C.L.U. has filed more than 30 similar lawsuits across the country.

But there are exceptions. Though Republicans in states like Texas and Wisconsin have tried to prevent broader access to alternatives to in-person voting, in Pennsylvania Republicans are supporting it. And in Oklahoma, the Republican governor has approved the release of hundreds of inmates so overcrowded conditions do not contribute to more infections.

“The pandemic held out the hope that we could come together and unite and rise above the partisan division that has so long afflicted us, and I think in some instances we are seeing that,” said David Cole, the A.C.L.U.’s national legal director. He added that instances of large church services and gatherings of hundreds of protesters were outliers so far.

“Which makes it all the more disturbing,” he added, “that the president of the United States encouraged this kind of activity.”

It is not difficult to understand why Mr. Trump feels the impulse to back the demonstrators. Footage of the recent protests shows a significant presence of Trump paraphernalia and an outpouring of support for him. At the Michigan event, which was documented on Facebook by a reporter for The Detroit Free Press, one man waving a Confederate flag explained through his protective mask why he was there. “Trump. Trump all the way,” he said.

Others carried the bumblebee yellow Gadsden flag, its coiled snake and “Don’t tread on me” emblem a symbol of the Tea Party, which Mr. Trump has always felt an affinity toward.

At the protest outside the Colorado State Capitol on Sunday, one woman who said the shutdowns had gone on too long told The Denver Post, “Pot shops are open, abortion clinics are open and my church is closed.”

One man who also attended the protest held a sign that read “Facts not fear,” a variation of the saying that Sean Hannity uses on his radio and Fox News programs — “Facts without fear” — to leave his fans with the false impression that they are getting the truth and nothing but.

The people at these protests have been overwhelmingly white. And while the coronavirus can strike people of any race, nationality, religion or political persuasion, data shows it is infecting and killing black people in the United States at disproportionately high rates.

Its spread also appears to be worsening in some of the states where the protests have taken place. In Kentucky, where last week demonstrators stood outside the Capitol building in Frankfort and chanted “We want to work!” at the Democratic governor, Andy Beshear, officials reported a sobering development on Monday.

The state recorded its highest number of new coronavirus cases yet in a single day: 273.