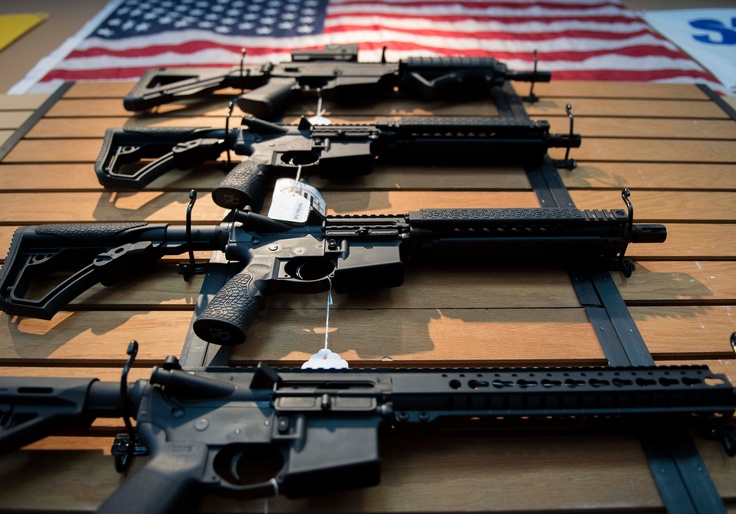 Aaron Eaton learned how to shoot in the Army back in 2006 but holstered a pistol for the last time when he left in 2009 and took a job as a technician for a sewer company. That all changed on March 26 when the father of four walked out of an Alabama gun store with a Beretta 92FS, the same gun he handled as a military policeman at the height of the Iraq war.

“Simply put: I wanted peace of mind when it comes to the safety of my family,” Eaton said.

Eaton’s pistol was one of 2.3 million firearms to fly off the shelves in March, the single busiest month for gun sales ever. The Washington Free Beacon spoke to half a dozen new gun owners who purchased a total of six handguns and two shotguns. All of the new gun owners provided proof of purchase, though some asked not to have their last names published because of potential career backlash.

“To me, it’s all about protecting my family, and if a gun makes that easier, so be it,” Scott, a California tech worker with a wife and daughter, said.

“[My fiancée and I] came to the conclusion in early March that if a nation like Italy was going into full lockdown, we in the U.S. were likely on the same path,” Wilhelm said. “Given that, and knowing that police resources would be stretched to the max, I decided to purchase a handgun.”

The National Shooting Sports Foundation, the gun industry’s trade group, said new customers represented a large swath of new gun sales even as gun stores faced depleted stocks and shutdown orders from state and local governments across the country. ”A large portion of the 2.3 million sales during the month of March were to first-time buyers is what we’re hearing back from our retailers,” Mark Oliva, a spokesman for the group, said.

Retailers told the Free Beacon they’d never experienced anything like the recent surge of new buyers.

Brandon Wexler of Wex Gunworks in Delray Beach, Fla., said “at least 50 percent” of his sales in March were to first-time buyers. Michael Cargill of Central Texas Gun Works in Austin, Texas, said he was getting “100 calls an hour” at the peak and most were from new customers. Wayne Viden, vice president of Bob’s Little Gun Shop in Glassboro, N.J., said he also noticed an influx of new buyers.

“I think a lot of people were afraid of exactly what’s happening now,” Viden said. “They’re afraid if it continues to go on longer, things are going to get worse.”

Charrie Derosa, a saleswoman at Wex Gunworks, said shopworkers attempted to alleviate the unease caused by the lethal virus.

“‘We’re here for you.’ That’s the exact feeling that you have when you’re standing there and you’re looking at them,” she said. “And you can see it. You saw fear. You saw desperation.”

The fear extended past the disease to how communities would bear the strain of job loss, lockdown orders, and law enforcement policies adopted in the wake of the spread. One Tampa inmate who was released over coronavirus concerns has now been accused of murder, according to the Tampa Bay Times. Brian, a 40-year-old living near Tampa, lost his full-time bartending job in March but was concerned enough about deteriorating public safety that he dipped into his savings to purchase a Smith & Wesson M&P Shield.

“My biggest fear is that our local police force comes down with the virus,” he said. “If the good guys are all out sick, who is going to stop the bad guys? When people have no hope, they get desperate. And we fear the worst is to come.”

Scott, the California tech worker, said he is preparing not just for thinned policing, but for a potential uptick in hate crimes against his family. While he is not Asian, his wife and daughter are. He said they have already faced racial harassment during the outbreak.

“Just walking on the street, folks have honked and yelled at us [for] wearing masks,” he said. “And robberies are common in Asian communities. I worry about them.”

Matthew Rosky, a North Carolinian who bought a Benelli 12-gauge shotgun for himself and a 20-gauge shotgun for his wife on April 4, said he doesn’t “plan on being relieved of my property or my life if it comes to that.” He said the couple lost their home to a landslide in 2019 and the threat of a national emergency pushed them to follow through on the purchase they had already been considering.

“I am not real enthused with politicians letting criminals out of jails, nor will I be surprised to see crime go up since many police departments are not responding to anything but the worst emergencies,” Rosky said. ”Obviously, this is a pessimistic outlook but, ‘Hope for the best, prepare for the worst,’ seems like a good mantra at the moment.”

Andrew, a federal contractor living in Virginia who bought a Heckler & Koch VP9 for himself and one for his wife on March 21, said he had already experienced societal breakdown firsthand. He was a student at the University of Southern California during the Los Angeles riots and witnessed some of the destruction. He recalled “the acrid smell of smoke and the ceaseless police and fire sirens and LAPD choppers” as “the most poignant and searing memories” of his lifetime.

“The sad reality [is] that civil order can break down in less than 12 hours and the overwhelmed police can’t help you,” he said. “As I explained to my wife, I’ve seen things go sideways quickly—and with unpredictable results.”

Some of the new gun owners now find themselves caught in the political battles that have emerged in the wake of the coronavirus. Santa Clara County shut down gun stores before Scott could pick up his Smith & Wesson .357 revolver.

“To me, it’s better to have it and not need it than need it and not have it,” he said. “That’s why it’s frustrating to have that right taken away.”

Retailers said customers like Scott are the reason they have resisted shutdown orders. The stay-at-home order in Texas did not include an exemption for gun stores, but Cargill of Central Texas Gun Works kept his doors open even before state attorney general Ken Paxton said localities cannot shutter gun stores.

“I’m refusing to shut down because a lot of people lost their jobs,” Cargill said. “They don’t know where their next paycheck is coming from but they do know it’s up to them to protect their family. And they’re coming to me and they’re saying, ‘Hey, I have food for now and I have water and I have medicine but what I don’t have is a firearm to protect my house.'”

The adjustment to being a new gun owner has been easy for Eaton, the Alabama veteran.

“It’s the weapon the Army trained me with. I figured I should go back to something I’m familiar with,” he said.

He is an outlier among those the Free Beacon spoke to. A majority said they want to pursue further training—including those needed for carry-permits—once lockdowns are lifted and classes are available again. With closures in place, Scott has turned to online communities and video training. He said he had been impressed by what he’s seen from gun owners both in-person and online.