Thanks to the ATF, you can now buy handguns with your hamburgers? Federal judge buys stupid “ARs are machineguns” argument. 50% of Attorneys General confirm that they don’t know how the internet works. Northam advances gun control agenda through the state legislature. 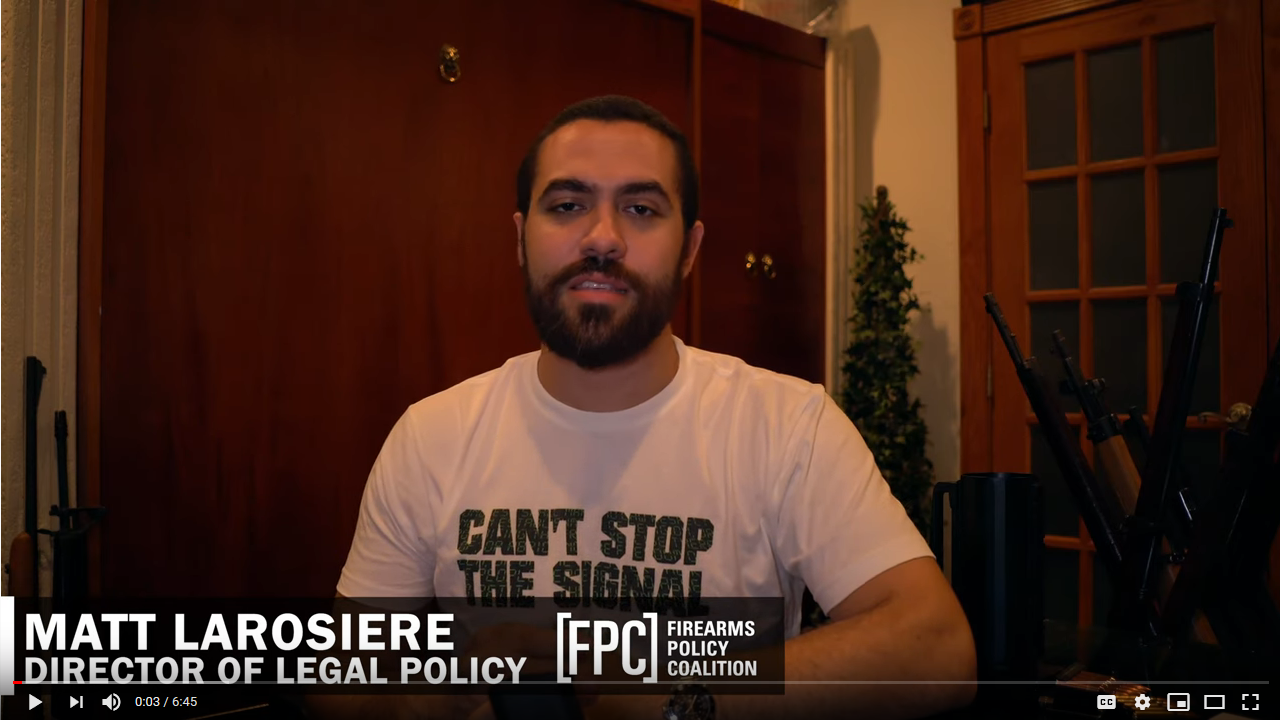 Thanks to the ATF, you can now buy handguns with your hamburgers?

In a move that caused the absolute meltdown of Karens everywhere, the ATF issued guidance to gun dealers last Friday that allows firearms transactions to occur outside of brick-and-mortar shops, provided that dealers secure their firearms inside their shops and otherwise comply with all federal and state requirements. In the letter, the ATF gave licensees two options: set up tables or booths outside, or use drive-through-style windows for transactions.

During a pandemic, both of these seem pretty reasonable, right? If the plan is to reduce the probability of infection, it only makes sense to conduct these transactions outside of the gun shop, but of course organizations like Brady want to “have it their way,” making silly declarations like “you shouldn’t be able to buy an AR-15 like you do a burger and fries.” Let’s agree to disagree, Brady Campaign (to ban handguns). Firstly, if you had actually read the letter, you would understand that dealers must comply with federal and state laws – all the guidance did was clarify a way in which dealers could be compliant. After all, don’t you want people in compliance? Secondly, you should absolutely be able to buy an AR-15 or any firearm, firearm accessory, ammunition, or basically anything else physically feasible from a drive-through whenever you want, but especially during a pandemic. It seems Brady cares more about enforcing their “not-in-my-backyard” nonsense than flattening the curve.

On another note, it’s slightly annoying that ATF issued this “guidance,” which far too many people are referring to as a “ruling.” It seems to me that this was always legal. Sometimes I worry that we are too quick to ask for permission. It’s the purpose of law to say what is forbidden. We are supposed to live in a sea of liberty, tolerating only islands of authority. Not the other way round.

What’s the difference between a semiautomatic firearm and an automatic firearm? Not much, according to an Obama-appointed federal judge in Nevada. In an order for partial dismissal of the plaintiff’s claims in Parsons v. Colt, Judge Andrew Gordon relied on a yarn spun by plaintiffs to conclude that the manufacturers of AR-15 style rifles knew that they are “readily convertible” to automatic fire and could thus be considered machineguns. Let’s get down to those “well-pled” facts.

Let’s be clear about one thing though: this ruling doesn’t stand for the proposition that everyone in Nevada with an AR-15 is violating the NFA. It’s a pretrial ruling on a garbage argument in a products liability case. Basically, the plaintiffs are trying to get around the Protection of Lawful Commerce in Arms Act (PLCAA), which prevents lawsuits against arms manufacturers for misuse of their firearms. There are a few ways to wriggle your way out of PLCAA-land, and the plaintiffs here are making the “but Colt wasn’t selling normal guns!” argument. This isn’t a reclassification case, it’s a “we wanna go after the gun company!” case.

One of the first claims relied upon by the judge was that the AR-15 “was designed as a military weapon called the M-16 and first saw use in the Vietnam War.” That’s simply not true. After being rejected for military adoption as the new standard service rifle, it wasn’t until 1963 that the Department of Defense made the transition from the M-14 to the M-16. This was after a series of tests of rifles of various pattern, all based on a scaled-down version of the AR-10, which had already been adopted by the Sudanese and Portuguese. Colt began selling its civilian model as the AR-15 the same year, which was mechanically designed only to accommodate semiautomatic fire. In fact, the only significance of the “AR-15” term to this day is intellectual property, in that it is wholly owned by Colt, and used to refer to its semi-automatic firearms. An homage to the “Armalite” company the pattern was purchased from.

The implication that the Colt AR-15 Sporter evolved from the killing fields of Vietnam is misleading at a minimum. The plaintiffs also claimed that bump stocks have only existed for a decade, which is also untrue – bump stocks have been around in one form or another since at least 2002, with “bump firing” being a common practice relating back decades.

If this case isn’t thrown out, hopefully one of the appellate judges will at least acknowledge these factual errors AND the PLCAA for its intended purpose – to prevent vexatious claims (backed by anti-Second Amendment groups) against firearms manufacturers for actions taken by criminals.

On Monday, the Attorney General of Washington State sent a letter undersigned by 24 other Attorneys General to Secretary of State Mike Pompeo, demanding that he take down the Defense Distributed website. Urging the feds to prosecute those involved in running the site, these bad-take lawyers claim that regulating access to these files is a matter of national security. This is, of course, because AGs, as a species, are liberty-hating crybabies. So badly do they want to cripple the Second Amendment, they don’t care if the First goes with it.

The entire premise of their argument is that printed firearms components can pass through metal detectors without setting them off. They’re not wrong. But it doesn’t take a genius to know that you have to have to use metal components for them to work well. You know, things like a barrel, which definitely do set off metal detectors. I don’t know if these guys are just slow or if they’re intentionally using bad information to support their cause. Not only are they wrong about how guns work, but they couldn’t even remember which website they wanted to shut down.

The “metal detector” hysteria is irrelevant, though, as the electronic files they’re attacking are just representations of what could be; models and renderings can be used to construct works which are both artistic and functional. For this reason, these files should be protected under the First Amendment because they’re a form of speech (don’t worry, we’re working on that). Even if this material was purely functional, providing knowledge or blueprints for designing weapons is an American pastime, and handing someone the knowledge to create something isn’t the same as handing them a grenade.

Ultimately, what’s most hilarious about these gun-grabbers sending this letter is that they don’t get how the internet works (which explains why they don’t know how to do historical, subject matter, or legal research). Once files are on the internet, they’re basically on there forever. Even if they take down a particular web address, that won’t stop the flow of information between individuals across the globe, whether it be by email, blockchain, or handing someone a flash drive.

We at FPC have been focusing a lot of our energy on fighting states that are closing gun shops and permitting processes, but that doesn’t mean we aren’t following other gun rights infringements. Federal and state-level are also using the epidemic to discretely push gun control while people are focusing on things like taking care of their children and putting food on the table. I spoke about this to some extent last week, but unsurprisingly, Virginia’s Governor Northam won’t stop ‘til he gets enough, this time signing five new bills into law while the state’s residents are on lockdown.

If the Covid-19 epidemic has shown us anything, it’s that the government is more than willing to operate in the dark to make it even more difficult for us to exercise our rights. By keeping people in their homes, tyrants like Northam prevent them from exercising their right to assemble and protest the passage of unconstitutional measures like Virginia’s new red flag law. When Northam signed the state’s new universal background check into law, he also made it more difficult for family members to transfer ownership to family members, requiring them to find a FFL to conduct their transfer. Not only is this time consuming and costly for many of the state’s more rural and poor residents, but it also increases the likelihood that these individuals will be exposed to the coronavirus.

Not only is the government of Virginia saying that it won’t keep its residents safe, its governor is actively trying to cause them harm.

We’ve been super busy, and all of these updates can be found on FPC’s legal action page. But just to sum up recent events: