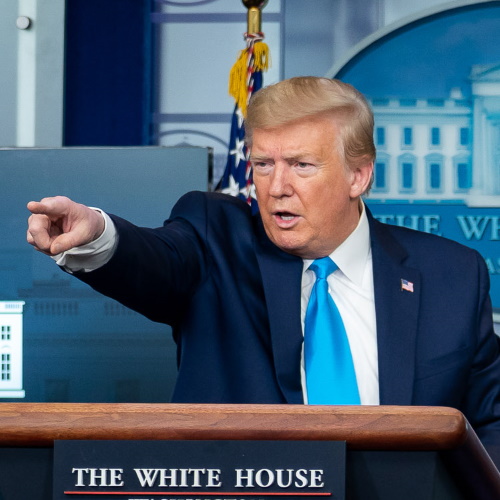 At the White House coronavirus task force press briefing on April 7, President Donald Trump distorted the facts about the person he dismissed as the chief watchdog for spending under the new pandemic relief legislation and the Wisconsin election, which took place as scheduled despite the coronavirus outbreak:

Asked to explain his decision to replace Fine, Trump started by saying he has been replacing inspectors general from “the Obama era” when the administration gets “reports of bias.”

“Well, we have … IGs in from the Obama era,” said Trump, using the common Washington shorthand for inspector general.

When he was told Fine wasn’t necessarily linked to President Barack Obama, Trump replied, “Maybe he was from Clinton.”

In fact, Fine has worked in federal government during both Republican and Democratic administrations and does not have a reputation as a political figure, but rather as an aggressive, independent investigator.

Fine became the Justice Department’s inspector general in 2000, under President Bill Clinton, and served in that role until 2011 during both terms of Republican President George W. Bush, finishing up under Obama, like Clinton a Democrat. After four years in private practice, he returned to the federal government under Obama.

Fine was named the Defense Department’s principal deputy inspector general on June 1, 2015. He became the Pentagon’s acting inspector general the following January and has spent three-and-a-half years in the Trump administration.

Fine, co-captain of Harvard’s basketball team and a 10th-round draft choice of the San Antonio Spurs, served as special counsel to the DOJ inspector general and as director of the special investigations and review unit under Clinton from 1995 to 2000.

Fine was named chair of the Pandemic Response Accountability Committee on March 30. The committee’s mission is to oversee how money is spent under the recently enacted $2.2 trillion coronavirus relief legislation. The panel’s members must be inspectors general. By dismissing him from the Pentagon IG position, Trump effectively relieved Fine from leading the pandemic spending committee.

On April 8, House Democrats introduced legislation that would allow Fine, who is now the Pentagon’s principal deputy inspector general, to chair the pandemic review committee.

In announcing Fine’s appointment, Michael Horowitz, chair of the Council of the Inspectors General on Integrity and Efficiency, said, “Mr. Fine is uniquely qualified to lead the Pandemic Response Accountability Committee, given his more than 15 years of experience as an Inspector General overseeing large organizations.”

Fine’s former boss, James Mattis, who served as defense secretary under Trump, came to Fine’s defense after he was let go.

“Mr. Fine is a public servant in the finest tradition of honest, competent governance,” Mattis told Yahoo News in an email. “In my years of extensive engagement with him as our Department of Defense’s acting Inspector General, he proved to be a leader whose personal and managerial integrity were always of the highest order.”

Horowitz will head a group of inspectors general who will name a new head of the Pandemic Response Accountability Committee. Replacing Fine as the Pentagon’s acting inspector general will be Sean O’Donnell, the inspector general at the Environmental Protection Agency, who retains his current position.

An oversight mechanism for the mammoth coronavirus relief aid package was a key demand from Democrats as the bill was negotiated.

Fine is not the only inspector general to come into Trump’s sights recently.

On April 3, Trump fired Michael Atkinson, the intelligence community inspector general who told Congress about the whistleblower complaint, leading to Trump’s impeachment. And on April 6 Trump raised questions about Principal Deputy Inspector General Christi Grimm of the Department of Health and Human Services because of her report that found shortages and testing delays at hospitals. Like Fine, Grimm is a career government official.

Wisconsin Gov. Tony Evers issued an 11th-hour executive order to move the state’s April 7 election to June because of the coronavirus pandemic. Evers, a Democrat who had been under pressure from his own party for weeks to postpone the election, issued the order on April 6, seeking to delay the election until June 9 or a date that the governor and Republican Legislature could agree upon.

But the Republican state legislative leaders immediately went to the state Supreme Court, which ruled that the governor’s decision was unconstitutional. That ruling was upheld by the U.S. Supreme Court, allowing the election to take place on April 7.

Despite complaints of voter suppression, the election went off as planned. The state’s largest city, Milwaukee, had only five of its 180 polling places open, because of health concerns. In Green Bay, only two of its 31 polling places were open.

The president then falsely claimed that Wisconsin Democrats acted at the last minute to postpone the April 7 election not because of safety concerns but because he endorsed state Supreme Court Justice Daniel Kelly “just the other day” on social media, referring to an April 3 tweet.

Trump, April 7: Of course they were right. Yeah. Look, the Supreme Court — well, of course they were right, because what the Democrats wanted — and you know why this happened. I supported a man named Justice Kelly, who’s — Daniel Kelly, highly respected justice. And I supported him just the other day — social media. I know of him. He’s a — just a, you know, fantastic judge, justice. And I endorsed him.

Trump leaves the impression that his April 3 tweet set in motion a last-minute attempt by Wisconsin Democrats to delay the election. In fact, Democrats were pressuring Evers to postpone the April 7 election for weeks, but the governor resisted and instead urged voters to vote by mail ballots.

For example, Milwaukee Mayor Tom Barrett, a Democrat, urged the governor on March 24 to hold the election by mail and suspend in-person voting.

Also, Trump endorsed Kelly on Jan. 14 at a rally, as the state Republican Party noted in a press release a day after the rally.

The press release included a video of Trump’s endorsement of Kelly.

At the time, the conservative incumbent justice was running in a three-way nonpartisan primary against two “liberal-leaning challengers,” as the Associated Press described the race. The top two vote-getters in the February primary – Kelly and Jill Karofsky — advanced to the general election, which was held on April 7.

The state GOP supported Kelly, who was also endorsed by the National Rifle Association and state anti-abortion groups. Karofsky, his challenger, was endorsed by the state’s top Democrats, labor unions and women’s groups.

Trump did tweet on April 3 that Kelly has his “Complete Endorsement,” but that was the case back on Jan. 14. There is no evidence that that tweet had anything to do with attempts to move the date of the election.