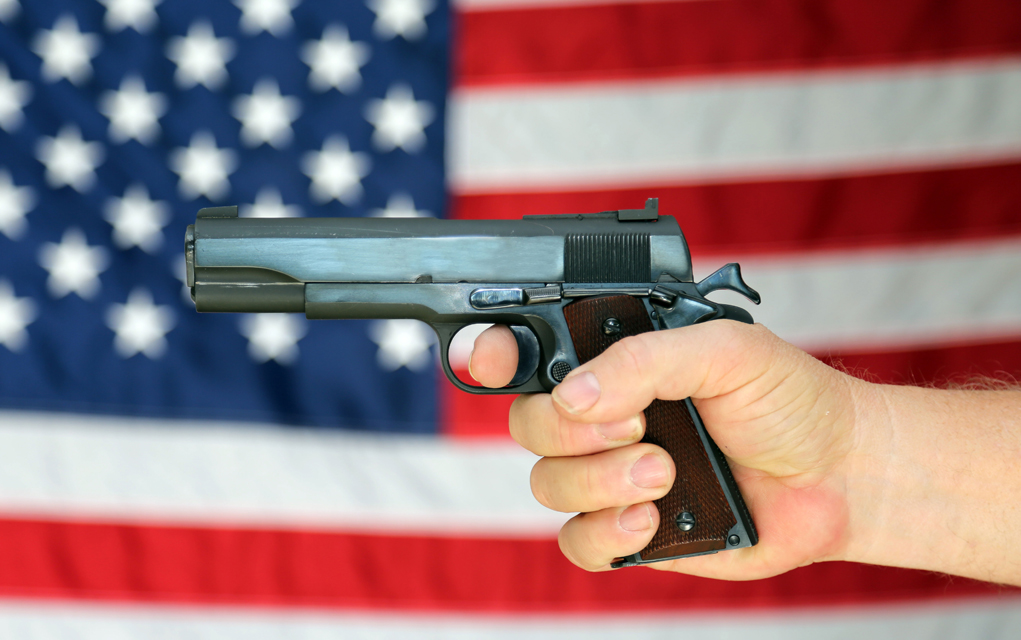 On April 2, the Colorado Bureau of Investigation announced that it had received 25,468 background checks for gun sales in the previous week — a 227% increase from the same time frame in 2019.

It’s indicative of a trend as old as the United States — in times of crisis, be it financial, political, health-related or spurred by gun violence itself — Americans buy guns.

That people have bought more guns in less time than almost ever before — the numbers are just shy of sales in the month after the Sandy Hook shooting and Obama’s reelection — is indicative of a widespread belief in Colorado and elsewhere that guns equal security. And the trend sheds light on why the State of Colorado and the federal government have determined gun stores “essential” businesses; that is, they are allowed to stay open, along with grocery stores, hospitals and energy utilities.

Why do gun sales surge in times of crisis?

You’ve likely heard some version of the joke about why Americans bought 1.9 million guns in March: What are you gonna do, shoot the virus?

But, of course, the spirit of that joke belies the real fear people have now and the real sense of security they get from owning a gun. Jennifer Carlson, an associate professor of sociology at the University of Arizona, who wrote a book about the social implications of gun ownership, Citizen-Protectors, says buying a gun in a time of crisis is spurred by one of three things: Fear that the government will ban them or they’ll become scarce; a belief that buying a gun is a political statement; or the fear of social collapse.

The gun sale spike during the coronavirus can be attributed in large part to that last idea, Carlson says.

“People correctly see that as a result of the coronavirus requirements currently imposed on law enforcement, it’s less likely police would be available to answer the middle-of-the-night 911 call when they hear someone moving on the first floor of their house,” Hammond says.

There is merit to some of that argument. In Detroit, for instance, over 150 police officers are off-duty, including the police chief, because they’ve contracted coronavirus.

“This is already a place that is strapped for policing. When you add coronavirus to the mix, I think that’s where the insecurities are coming from,” Carlson says.

But the belief that guns offer protection doesn’t necessarily align with data. There’s plenty of statistics to bear that out — here’s but one: The Annals of Internal Medicine concluded in 2014 that having a firearm in the home, even when it’s properly stored, doubles one’s risk of becoming a homicide victim and triples the risk of suicide. But that’s par for the course, Carlson says.

“This is not just gun people, Americans in general do not use stats to inform their feelings about crime,” Carlson says. “Crime can be going down and Americans will say crime is going up.”

Carlson points out that’s because crime is localized and uneven — even if national or regional numbers indicate crime is going down, if you’ve had violence or disruption in your community or your home, you’re more likely to feel threatened.

And turning to guns in moments like these is hardly unprecedented in this country.

“Guns have always played a role in how Americans confront insecurity and the unknown. This is not new. The specifics are new and novel and feel like we’ve never been here before, but the fact is this is not historically unprecedented. …Whether we like it or not, in the U.S., we live in a society with over 300 million guns. When you have a context where people are feeling insecure and the collective security apparatus is on the verge of collapse — whether it’s objectively right or wrong — [guns] are tools at the disposal of Americans.”

So guns, data notwithstanding, are viewed as tools for security. And Kris Brown, president of Brady: United against Gun Violence, a gun control advocacy group, says the coronavirus has triggered our collective biological response to threats.

“This is to me fight or flight. We’re all human beings and where we go — it’s like being a tiger on the savanna — is to attack or to a place of safety, and so many people, because of NRA marketing … it’s just the idea of having the gun that gives a sense of security like a blanket to a kid,” Brown says.

Why are gun stores ‘essential’ businesses?

Federal guidance, though not a mandate, is that gun stores should be deemed “essential” and allowed to stay open even as other seemingly essential businesses shutter or deal with revenue-hampering mandates. That’s the result of a concerted effort by the gun lobby and years of political deal-making.

Some states, like Michigan and Vermont, have deemed gun shops non-essential. Others, like California, have left the decision up to local jurisdictions. Still more have walked back their non-essential designations after lawsuits from the gun lobby.

Colorado, with its surging background check numbers, has determined gun stores are essential. When asked why, the Colorado Department of Public Health and Environment wrote to Boulder Weekly: “We have to balance the needs of the public with public health and safety. None of these decisions are easy. We ask that all Coloradans comply with the order to protect those most vulnerable.”

The decision is baffling to some, considering that other Consitutional rights like freedom of assembly and right to a fair and speedy trial are being curbed in order to combat the coronavirus, and as other rights swayed by political winds, like abortion, have been deemed non-essential in some states.

“We’re defecating on the entire Constitution,” Hammond says in jest. “That certainly is good news. It makes us feel good that we’re not the only ones that are having all of our god-given rights shredded.”

But Hammond adds, not in jest, that personal protection, in the form of gun ownership, is fundamentally essential.

“This happens in some form 1.5 million times a year: someone uses a gun or a threat to use a gun in order to avert a crime,” Hammond says. “If you’re the one who is lying there and considering whether you or your family is dead, that’s a pretty essential question.”

(The Centers for Disease Control found that guns are used in self-defense between 500,000 and 3 million times per year.)

That gun rights advocates have gotten what they want amid coronavirus is the result of a well-organized effort within the gun community that was organized and ready to push for its rights, Hammond says.

“I think the gun community has become by necessity a community that is sensitive to impingement on their rights, and we know how to reach them,” he says. “I’m not sure we know how much we can reach people who feel their rights to assemble are being infringed on.”

But the motives of that organized community are questionable, Brown, from Brady, says — that it’s more about selling guns than protecting Constitutional rights.

“They view it as a sales bonanza. In the meantime the people who are rushing to buy these guns are putting themselves at risk,” she says, citing the long lines of people wrapping around gun shop corners and the lack of appropriate training.

But part of the reason why the gun lobby is able to push through initiatives like making gun stores “essential” is because there’s not as organized an opposition, and Carlson says it’s because Americans have ambivalent views about gun ownership — about 70% of Americans don’t think we should ban handguns, according to a recent Gallup poll, even though far fewer actually own them.

Certainly that number is the result of years of marketing from the gun lobby, but it underscores the fact that the majority of Americans are OK with widespread gun ownership (with the critical caveat that two-thirds of Americans want stricter gun laws).

“We tend to think because our political debate is so vociferous on this that the two camps are really defined, but there are a lot of people who are not really sure, so something like this would push them [to gun ownership],” Carlson says.

Regardless of your thoughts on guns, whether they provide security and if they should be deemed essential businesses during the coronavirus, the impact of increased gun ownership is likely to be long-lasting, Brown says.

“At some point in the future, if you listen to trustworthy people in the administration, and by that I mean Anthony Fauci, we will have an immunization against coronavirus, but there is no immunization for that new unloaded and unsecured gun you’ve brought into your home,” Brown says. “The reality is that a gun is much more likely to kill or injure someone in your home than protect them.”

And given that statistics indicate guns in homes increase the rate of suicide and homicide, Brown is concerned in a time of job loss and emotional distress that instances of suicide, domestic violence and accidental homicide will increase.

“That’s not me being apocalyptic or being a bogeyman. That’s the fact of reality of life in America today,” she says.

Complicating matters is that if a background check for a gun sale is not completed within three business days, the sale must proceed. Some states, including Colorado, have told gun stores to delay purchases until background checks are completed even if they go over the three-day limit, but it’s not a mandate.

“The whole idea of our background check system is gun stores are the last line of defense to ensure that sale is lawful. We don’t want this transaction to be rushed. They shouldn’t be rushed,” Brown says.

And the problem is likely to get worse, Brown says.

“The FBI … has limited resources to conduct the checks. If you’re in a situation where the surge of requests is overwhelming gun stores and the federal and state background check system, that creates a delay or backlog of checks to be processed. When that delay builds up, which it will over time, then some of those checks won’t be cleared within the 72-hour time frame, which means the sale can proceed by definition. It just builds up and every three days, it increases.

“It doesn’t matter whether you have a clean record or whether your record is riddled with felonies,” Brown continues. “It’s a big problem.”