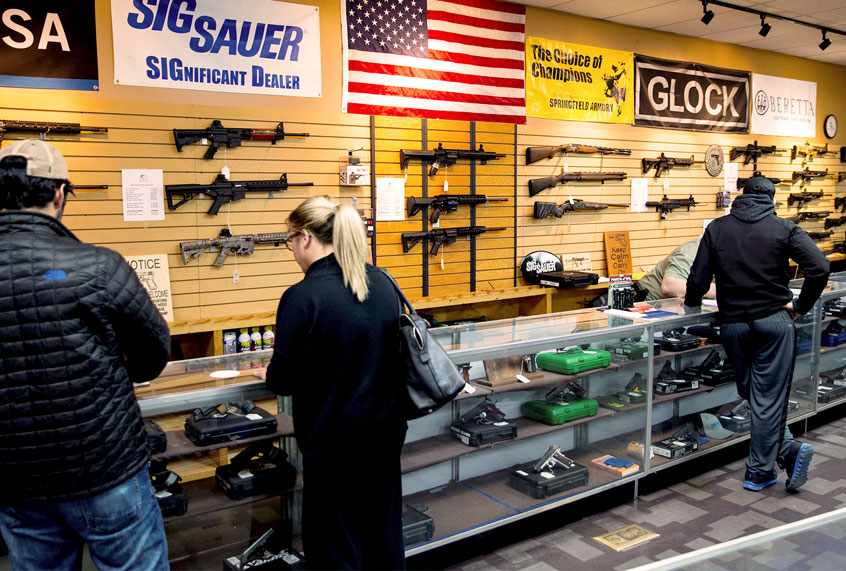 Way too many Americans mistake zombie movies for real life: This is what we are learning from the public response to the rapidly spreading coronavirus. While public health officials offer advice like “wash your hands” and “for heaven’s sake, stay home,” huge numbers of Americans are instead stampeding to gun stores to buy up weapons and ammunition. In my South Philly neighborhood, social distancing rules were being ignored as people lined up to grab weapons.

Line at Philadelphia Gun and Archery Club wrapped around the block despite supposed closure of non-essential businesses. Asked one woman in line what she was getting, and she said: “What everyone else is buying: A gun.” pic.twitter.com/EKrQY8Wksl

No doubt these folks are aware that COVID-19 is a microscopic virus and therefore is not something you can shoot. No, obviously, the fear is about the economy collapsing (thanks for the negligence, Donald Trump!), leading to a rise in crime and violence, in which people imagine they can use these guns to defend their lives, families and property. Also, decades of NRA propaganda have convinced people to associate guns with safety. Indeed, as the economy craters, the NRA is treating this crisis as another opportunity to sell guns to people. What else would it do?

During every disaster, the @NRA stokes panic in order to juice gun sales.

Stocking up on guns in response to a pandemic is a risky and uniquely American response that carries with it increased likelihood of intimate partner violence, unintentional shootings, and gun suicide. https://t.co/gI2xB3G0gZ

But the last thing anyone should be doing in this crisis, if they want to stay safe, is to buy a gun. Buying a gun right now will make your family and your home less safe, especially if you, like many panic buyers, are not trained in gun safety and don’t have the proper storage.

Buying a gun significantly raises the chances of someone in your house being injured or killed in an accident, a suicide attempt or interpersonal violence. The hospitals are already buckling down, fearful that coronavirus will fill up ICUs and emergency rooms. Adding avoidable gun injuries to the mix isn’t just foolish. It’s selfish.

“Guns make your home less safe,” Dr. Mark Hoofnagle, a trauma surgeon in St. Louis, told Salon. “If you have children in the house, it will certainly make you less safe.”

Hoofnagle said he is a gun owner himself, but added, “The idea that a gun is a safety device is completely absurd.”

The research backs him up. In August 2019, researchers looked at what happened in the aftermath of these runs on gun stores, which tend to happen during a crisis or right after a widely-publicized mass shooting. Their findings, which were published in the journal Injury Epidemiology, showed that in the year after such a spike in gun purchases, the number of firearm-related injuries in a community went up.

And that’s without the exacerbating factors that Americans are experiencing now, which include being stuck at home most of the day and potentially losing their employment income. Right now, people in our country are under the kind of stress that increases domestic violence and suicide attempts — both of which are more likely to result in serious injury or death if there’s a gun in the home. In addition, kids are off school and sitting around bored, which means they’re more likely to stumble across a gun in the home and shoot themselves or someone else by accident.

In addition, as Hoofnagle noted, this is “not exactly a great time to take classes or find a spot at the range” to learn how to use a newly purchased weapon properly. That will also lead to elevated chance of a gun accident in the home.

Of course, no one wants to imagine they’ll be the ones who have an accident, or who attempt suicide in a dark moment, or who get into a lethal fight with a spouse, or whose child finds the gun and fires it. No, the panic buyers are all imagining themselves as heroic self-defenders, warding off all the bad guys that will attack their homes and families in the societal chaos that they (plausibly enough) suspect is coming because of this pandemic and the economic collapse resulting from Trump’s epic mismanagement.

But people should set aside their fantasies of “protecting their stockpile of Charmin,” as Hoofnagle put it. The idea that guns are effective at self-defense is a myth, which is constantly propped up by the gun industry and has been repeatedly disproved by independent researchers.

The Harvard Injury Control Research Center has compiled the evidence and found that most claims of “self-defense” after a gun fight were not, as people imagine, tales of manly men heroically defending their families against some baddie breaking in a window. Most of these incidents, in fact, involved people who escalated an argument or confrontation to a lethal level by whipping out a gun. Indeed, if there’s a gun in the home, it’s far more likely to be used by one household member to intimidate another than to protect them.

In other words, the people rushing out to buy guns right now are not likely to use them to defend themselves. What will happen instead, in far too many cases, is that they’ll be cooped up with a spouse and get into fights in which someone —generally, in the real world, this is a man — grabs the gun and threatens their spouse with it. While there are many factors that go into any such incident, the psychological damage and the risk of serious injury or death is drastically increased by the presence of a gun.

Everyone is feeling helpless and scared right now, and wants to find ways to gain a sense of control over their lives. There are plenty of things we can do that are actually helpful: Clean and organize your house. Hold a FaceTime happy hour with friends. Learn a new hobby. Install a security system at your house, if you’re worried about break-ins. Donate to a Democratic candidate, in hopes of getting the White House monster who got us into this disaster out of office.

But one thing you should not do is buy a gun. It won’t make you or your family safer. On the contrary, it might lead to someone getting shot — and needing to be rushed to a hospital that’s already in danger of being overwhelmed by the coronavirus. So stay home and stay safe. Leave the guns alone.

MSNBC Bewails Lack of Weapons Ban: “What’s It Going to Take?”
A Brilliant Survival Idea: Keeping Dry
Could Your Dorm Roommate Be Carrying a Gun? These States Allow Firearms on College Campuses
Community Voices: The fewer the ARs out there, the fewer who will die
Inside the Far-Right’s Fight for College Campuses