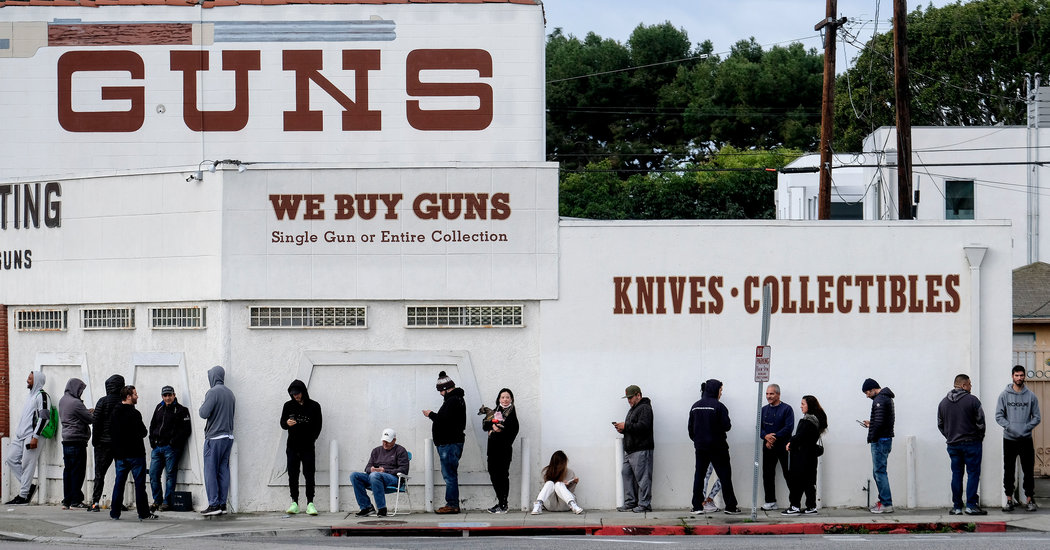 Faced with budget pressures and an invigorated gun control movement, the National Rifle Association has found a new cause amid the pandemic — fighting to keep gun stores open as its fund-raising appeals depict the government’s coronavirus response as a threat to Second Amendment rights.

On Thursday, the group sued the State of New York over its decision to include gun retailers among the many businesses that have been forced to close during the crisis. The N.R.A. had already filed two suits against California, where the governor had left the decision to counties.

The suits come as the N.R.A. and other gun groups have successfully lobbied the White House to get the Department of Homeland Security to add firearms vendors to its list of essential businesses. That prompted states like New Jersey to reverse course and allow such stores to remain open. But New York, the epicenter of the outbreak in the United States, has resisted, viewing the shutdown of businesses across the state as a vital safety measure.

“There isn’t a single person who has ever used a gun in self-defense who would consider it nonessential,” the N.R.A.’s chief executive, Wayne LaPierre, said in a statement, calling the shutdown of gun stores an assault “on our Second Amendment freedoms.”

Letitia James, the attorney general of New York, said in a statement that “everyone — including the N.R.A. — must follow the law and all executive orders of New York.”

“We will aggressively defend the state against yet another legal assault by the N.R.A.,” she added.

Heading into the pandemic, gun control groups viewed 2020 as an opportunity. Their spending has been surging in recent elections, and Everytown for Gun Safety, whose biggest backer has been Michael R. Bloomberg, plans to spend $60 million this year across the ballot.

By contrast, the N.R.A. has been in a weakened position. While it played a pivotal role in the 2016 race, spending $30 million to help elect President Trump, it has more recently been sapped by internal dissent, litigation and outside investigations, and was already seen as unlikely to match that figure this year.

Over the past several months, the White House and the Trump campaign have hedged their bets by more aggressively reaching out to other gun groups. While the N.R.A.’s pre-eminence remains, in part because of its ability to mobilize supporters, it faced further challenges when the pandemic forced it to cancel its convention, an important source of revenue, as well as a number of fund-raising events, leading to a round of layoffs and to pay cuts of at least 20 percent across the organization.

“We’re all confronting this,” Andrew Arulanandam, a spokesman for the N.R.A., said in an interview. “The convention was millions of dollars,” adding that “just like everyone else, we’re facing a loss of revenue.”

But demand for firearms has been surging as lines form at some gun stores during the pandemic, with background checks rising more than 40 percent in March from a year earlier, developments seen as an opportunity by the N.R.A.

“This has brought new people into the gun rights movement,” Mr. Arulanandam said. The surge in sales, he said, would “end up strengthening us.”

The group has been retooling its strategy. Many on the right played down the virus, including at the N.R.A. — Willes Lee, the board’s second vice president, called it an “election ploy.” But the organization itself has focused on the ramifications of the sweeping response in many states, sending out messages to its supporters with headlines like “COVID-19: Threat to Second Amendment” and “Pandemic Exposes Dangers of So-Called ‘Universal’ Background Checks.”

On Wednesday, the N.R.A. tweeted about the sharp rise in gun sales: “what do they expect when they are releasing inmates while closing gun shops during a pandemic.” The group has also circulated a video in which a disabled woman holding an assault weapon issues a warning to people buying extra food: “If you aren’t preparing to defend your property when everything goes wrong, you’re really just stockpiling for somebody else.”

Such sentiments are maddening to the N.R.A.’s opponents.

“They’re mired in crisis, strapped for cash, and so revert to the old playbook — fearmongering about the collapse of society — in order to raise money,” said John Feinblatt, the president of Everytown, adding that the N.R.A. was trying to convince people that “apocalypse is on its way.”

The lawsuit against New York is the N.R.A.’s latest legal battle with the state. In February, regulators charged the company with improperly selling insurance in the state without a license. For the past year, the N.R.A., a nonprofit chartered in New York, has been under investigation by the office of Ms. James, who is examining allegations of corruption and self-dealing. The N.R.A. has also sued the state, claiming that Gov. Andrew M. Cuomo and his administration improperly pressured banks and insurers to stop doing business with the gun group.

As the two sides of the firearms debate prepare to square off in the 2020 election, gun control groups have rallied around the likely Democratic nominee, former Vice President Joseph R. Biden Jr. Guns are one of the rare issues on which Mr. Biden has more progressive credentials than his remaining rival, Senator Bernie Sanders, who comes from a rural state, Vermont, and has had a cautious approach to gun control.

But for gun groups, Mr. Biden has become a polarizing figure. Last month, the N.R.A. seized on Mr. Biden’s confrontation with a gun owner at a Michigan assembly plant. Gun activists were also incensed when Mr. Biden embraced former Representative Beto O’Rourke at a Texas rally earlier this year, promising, “You’re going to take care of the gun problem with me.” Mr. O’Rourke took the hardest line on gun control during his presidential bid, proposing not just to end sales of assault weapons but to confiscate existing ones.

The election will be a test for the N.R.A. and for Mr. LaPierre. Amid the N.R.A.’s troubles last year, the White House increased its contacts with other organizations.

“They are reaching out to other gun rights groups for this election,” Alan Gottlieb, head of the Second Amendment Foundation, said in an interview earlier this year. Mr. Gottlieb said that he had come to the West Wing in December and met with officials there, though not Mr. Trump, and that he separately met with Trump campaign officials last fall and had been in contact since.

“The fact they have been reaching out as much as they have been, since things started internally at the N.R.A., one has to assume that they want to stay plugged in to the gun rights constituency,” he said.

Several organizations, along with the N.R.A., were involved in the lobbying effort to have gun stores declared essential.

“We talked to a number of folks at the White House and Homeland Security,” said Lawrence Keane, general counsel for the National Shooting Sports Foundation, a trade group. “The ability to exercise your constitutional rights begins at the retail counter. If you can’t purchase at the retail counter, your rights are denied.”