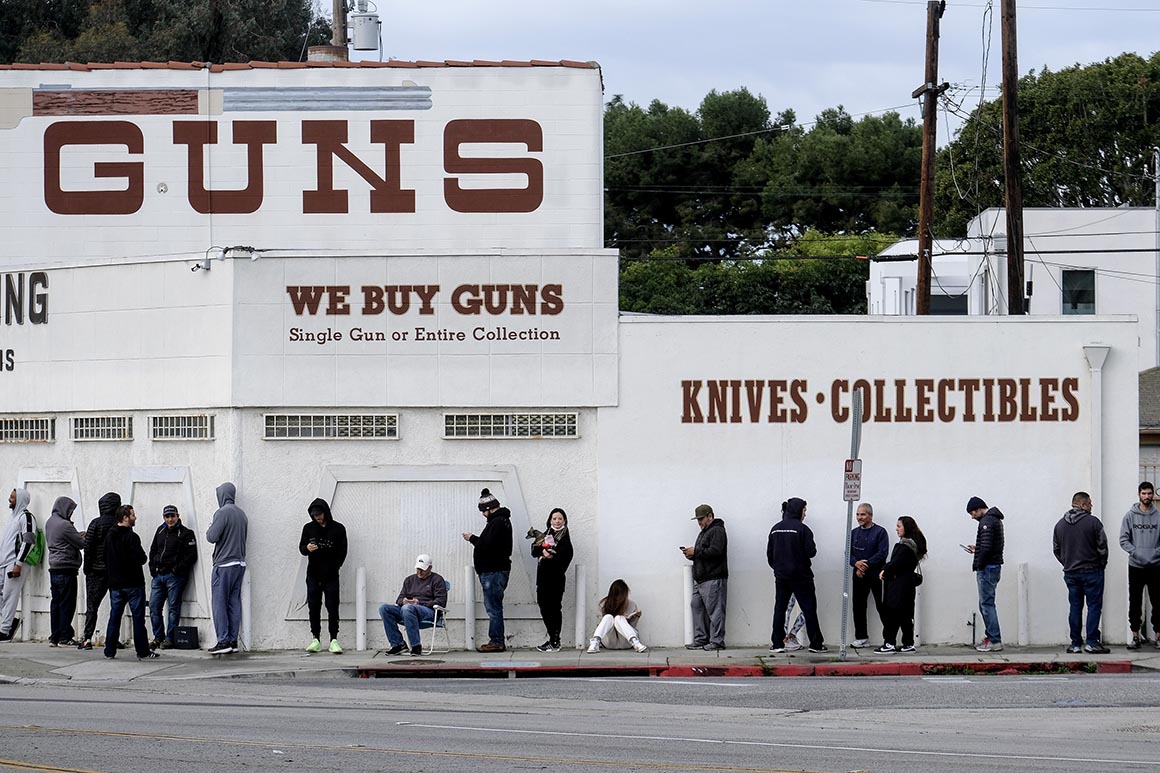 Long lines were forming outside gun shops. Ammunition was selling out. The national background check system was flooded with requests.

The gun industry wanted to keep it that way, even as governors started ordering nonessential businesses closed during the coronavirus outbreak. And it knew just where it could turn: the White House.

After a lobbying blitz that included calls to both the outgoing and incoming chiefs of staff and a White House aide who used to work for the National Rifle Association, the administration revised its initial guidelines and declared gun stores and shooting ranges to be critical businesses that can stay open during the outbreak — putting them on par with hospitals, grocery stores and pharmacies.

The change has already prompted one state to reverse its previous order and reopen gun stores.

“It wouldn’t have been my definition, but that’s the definition at the federal level,” said New Jersey Gov. Phil Murphy, a Democrat who supports gun restrictions. “I didn’t get a vote on that.”

The move shows that, even in the time of pandemics, politics still plays a role. As Americans settle into a new way of life, culture war battles have broken out over the Second Amendment, as well as abortion and voting rights. So far, though, President Donald Trump’s White House has intervened most directly on the question of gun purchases.

Trump came into the White House vowing to repay gun owners for their support in his 2016 election. He has talked from time to time about making changes in the wake of mass shootings, but by and large kept his word, siding with gun rights activists throughout his presidency.

The era of the coronavirus has proved no different.

Those who favor more firearm restrictions say they worry that a proliferation of guns during a crisis, especially among first-time buyers, will lead to more accidental shootings, domestic violence and suicide. Those who oppose any new restrictions said they were confident Trump would understand their constitutional right of self-defense in the case of social unrest.

Now that the White House has made its decision, it’s up to state leaders to determine whether to comply with the federal guidelines. Those on both sides of the debate think they will.

“We think other states will follow,” said Lawrence Keane, senior vice president and general counsel for the National Shooting Sports Foundation, the trade association for the firearm and ammunition industry, which led the lobbying effort.

Kris Brown, president of Brady, a group which supports increased firearms restrictions, said she fears governors will abide by the guidelines because of Trump’s threats to withhold aid from states that don’t support him, as well as worries they will be sued.

“There is no way politics isn’t playing a role in this,” Brown said. “I think the reality of going against this simply from a political standpoint would be calculated differently when you know the surge may hit you.”

The White House didn’t respond to questions about the decision.

Since the coronavirus outbreak, states and localities have issued their own orders about whether to close gun stores and shooting ranges, leading gun rights groups to file lawsuits and lobby the Trump administration.

Pennsylvania, for example, allowed gun shops to be open for business while Washington state shut them. In California, where it’s up to localities to decide, the Los Angeles County sheriff has ordered them to close. About half of the states based their order on the federal guidelines, according to the federal government.

The National Shooting Sports Foundation, which represents retailers, manufacturers and distributors, led the push for new guidance, speaking directly to outgoing acting chief of staff Mick Mulvaney and incoming chief of staff Mark Meadows, as well as the office of Vice President Mike Pence, who is leading the White House Coronavirus Task Force, according to a person familiar with the outreach. The organization also spoke to Mulvaney counselor Michael Williams, a former law clerk for the NRA’s lobbying arm who later served as general counsel for the American Suppressor Association, an industry group pushing to ease restrictions on suppressors — more commonly known as silencers.

The group began lobbying about two weeks ago, making calls and writing letters to the Department of Homeland Security, which issued the guidelines, as well as to governors, counties, cities and mayors. Their argument: The industry supplies the military and law enforcement agencies, and Americans have the right to protect themselves.

“Food, water, shelter and adequate medical care are paramount for survival, but so too is the ability for an individual to defend his or herself, their family, as well as their home, business and property,” Keane wrote in a March 20 letter to DHS.

In recent days, Alan Gottlieb, founder of the Second Amendment Foundation, and Michael Hammond, legislative counsel for Gun Owners of America, also reached out to the administration through emails and calls. They alerted their supporters to do the same.

Dudley Brown, president of the National Association for Gun Rights, said gun supporters were angered when Trump suggested Rep. Thomas Massie, (R-Ky.), chairman of the House Second Amendment Caucus, should be thrown out of the Republican Party after he delayed the House vote on the recovery bill last week.

Brown, who notified his 6.5 million members on Facebook about the saga over the guidelines, said the revision will help Trump with his supporters.

“It’s a cheap and easy way to garner support to an already grumbling and disgruntled base,” he said.

Trump received an early and strong endorsement in 2016 from the NRA, which spent $30 million to help his 2016 campaign and to blast his Democratic opponent in TV ads. As president, he has sometimes vacillated between pleasing his conservative base that opposes more gun control and attracting moderate voters who favor measures to curb gun violence. But in the end he has consistently sided with gun advocates.

The administration has spent three years implementing more than half a dozen policy changes — primarily through little-noticed regulatory moves — that expand access to guns. Last year, after back-to-back mass shootings in Texas and Ohio, Trump vowed to implement restrictions in an effort to curb gun violence. But he abandoned the effort after hearing from the gun industry.

The powerful but beleaguered NRA declined to comment on its outreach but quickly praised Trump for the decision.

“Please join us in thanking President Trump and his administration for once again keeping his promise to protect the Second Amendment rights of all law-abiding Americans,” the NRA wrote in a statement.

The initial federal guidelines about what constitutes an “essential business,” which DHS issued on March 19, only included firearms manufacturers, citing the need to sell supplies to law enforcement. Just over a week later, the guidelines were expanded to also include, “Workers supporting the operation of firearm or ammunition product manufacturers, retailers, importers, distributors, and shooting ranges.”

The updated language is designed to help states “protect their communities, while ensuring continuity of functions critical to public health and safety,” wrote Christopher Krebs, head of the DHS agency that issued the guidelines.

A DHS spokesperson said the guidance was revised in several areas after officials received feedback from affected industries. Keane, of the National Shooting Sports Foundation, said he participated on a conference call with the agency after the initial guidance was released.

Groups pushing for gun control said they will send letters to governors and localities urging them to make their own decisions.

“Governors should feel empowered to make whatever decisions are best for their state without the pressure from the federal government and without pressure from the gun lobby,” said John Feinblatt, the president of Everytown For Gun Safety.

How to protect your CAMP from bears!
Senate Republicans Propose Concealed Carry Reciprocity Law
Critics Roast January 6 ‘Coward’ Clyde For Handing Out Assault Rifle Pins
The Hidden Trap In The New ATF Pistol Brace Rule That Affects YOU!
When an accessory is offensive