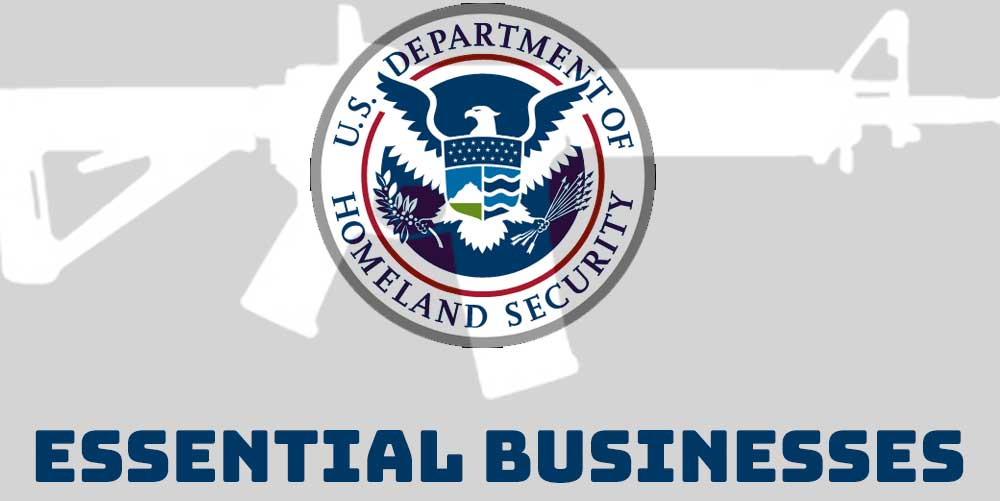 Editor Note: Readers, please share this article with your state, local and federal representatives, police departments and sheriffs as well local firearms retailers to make them aware of the new guidance so we can get our local business back to work and fellow Americans the products they need to remain safe.

USA – -(AmmoLand.com)- Under the Trump Administration’s guidance, the Department of Homeland Security has declared firearms manufacturers and retailers “essential businesses,” possibly driving a spike through the heart of various state and local “emergency powers” declarations that had classified gun stores to be “non-essential” during the current Coronavirus panic, and had ordered them closed.

The reference to gun shops is found in a document released Saturday titled “Guidance on the Essential Critical Infrastructure Workforce,” in the section dealing with “Law Enforcement, Public Safety, and Other First Responders.”

The announcement came after several days of often conflicting and confusing arguments about which businesses are necessary for public safety and security, and which are not. The controversy reached a point of ridiculousness when Washington Gov. Jay Inslee’s emergency order listed employees at marijuana shops, breweries and winemaking facilities as part of the essential workforce, but omitted firearm and ammunition retailers and distributors.

In New Jersey, Gov. Phil Murphy was sued in federal district court for ordering gun shops to close. One of those lawsuits, filed by the Second Amendment Foundation, is already in motion and was covered by AmmoLand News here.

A few hours later, SAF and FPC joined forces with the National Rifle Association, California Gun Rights Foundation and several others in a federal lawsuit against Gov. Gavin Newsom and Los Angeles County Sheriff Alex Villanueva. They are also alleged to be using the COVID-19 pandemic to close down gun stores.

“Every freedom loving American owes President Donald Trump and his administration a very big thank you for protecting our Second Amendment rights,” said SAF founder and Executive Vice President Alan Gottlieb in reaction to the DHS announcement. “This is another Trump promise made and promise kept.”

Gottlieb noted “a lot of people have done incredible work…to make it happen.”

He suggested that images of citizens rushing to gun stores “reminded government officials what the Second Amendment is really about.”

“Even people who never before owned a firearm rushed to buy one as the pandemic has spread,” Gottlieb stated. “Instinctively, people headed to those places where they could buy guns and ammunition, which underscores just how essential those businesses really are.”

In some states, local governments have tried to get in on the gun ban action. SAF had hinted strongly that it would be considering several lawsuits against states and political subdivisions that tried to close gun stores and even prohibit the carrying of firearms outside the home.

The announcement came on the heels of a decision in the State of Delaware to back away from a gun shop closure order. Faced with a federal lawsuit threat from SAF, the NRA, and FPC, Delaware revised the language of its emergency declaration, Gottlieb said in a telephone conversation. The order had come from Democrat Gov. John Carney earlier in the week.

That order now reads: “Firearms dealers may conduct sales of firearms, ammunition, and other goods directly related to responsible firearm storage and maintenance, by appointment only. No more than two appointments per half-hour shall occur, and sellers are limited to operating during normal working hours they operated on prior to the State of Emergency. Any seller who violates such directive may be subject to criminal prosecution or other civil enforcement remedies up to and including arrest or the involuntary closure of the business.”

“After we sued New Jersey, our threatened lawsuit against Delaware…played a key role in bringing about this change of heart,” SAF’s Gottlieb said. “We can think of no more essential endeavor outside of health care and emergency services during a time of crisis than a business that enables citizens to exercise their fundamental right protected by the Second Amendment.”

It is not known what, if any, immediate impact the DHS declaration will have on the recently-filed legal actions.

Also, review our gun products page now that shops will be reopening for FFL transfers.

Editors Note: Readers, please share this article with your local, state and federal representatives, police departments and sheriffs, as well local firearms retailers to make them aware of the new standing so we can get our local business back to work and fellow Americans the products they need to remain safe.