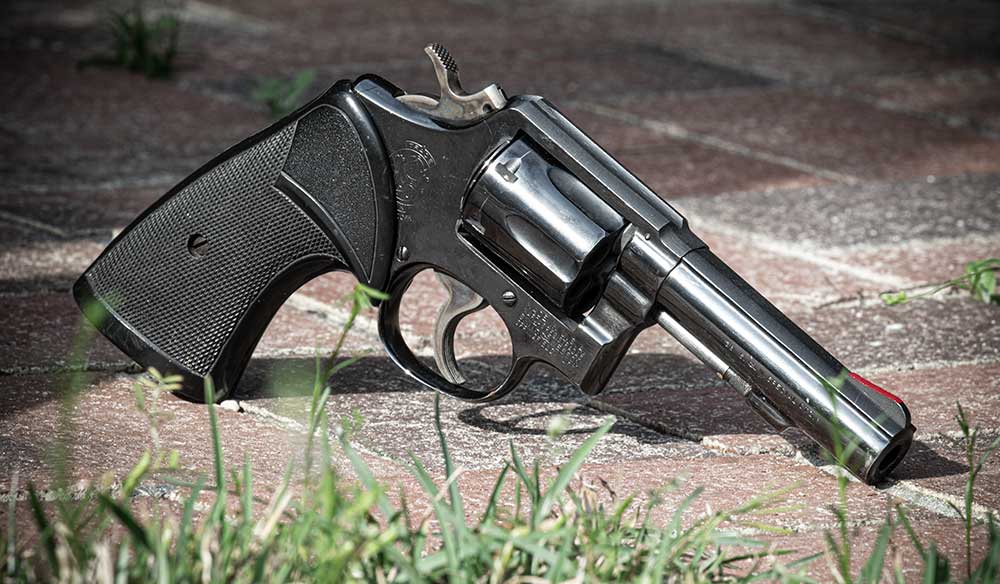 U.S.A. – -(AmmoLand.com)- So you waited too long to stock up on 5.56mm and 9mm, and now you’re worried about feeding your AR-15 and Glock. Don’t worry! There are dozens of firearms out there chambered in calibers that are actually in stock and not for totally insane prices! Meaning shooters won’t have to sell a kidney, eat ketchup sandwiches or heaven-forbid – dip into their stock of toilet paper!

So sit tight, buckle up and get ready to explore the world of semi-non-mainstream guns and calibers.

The Smith and Wesson Model 10 has been around in one form or another, since World War 1. This double, single-action six-shot revolver is incredibly reliable and surprisingly accurate.

Chambered in a variety of calibers, for the sake of our CoronApocalypse scenario, we’re going to stick to the .38 special version. And for good reason – .38 special isn’t cheap even when people aren’t panic buying. Thus, panic-buyers haven’t stripped all the shelves dry of the caliber quite yet.

Incredibly enough, in an actual TEOTWAWKI scenario, .38 Special can be loaded with black powder and works just fine. Provided that shooters have spare primers, and they remember to thoroughly clear their revolvers afterward.

But more than simply versatile, Model 10 revolvers are still very affordable on the used market. And given their overbuilt nature, unless the previous owner was loading ICBM-level loads through his six-shooter, it should last shooters for decades. The only caveat I would add is if buying in person to inspect for cylinder alignment and play.

Based heavily on Browning’s 1903 pistol design, the Soviet TT-33 pistol is a remarkable diamond in the rough. The locked-breach, single-action only semi-automatic handgun was the precursor to the Russian PMM Makarov and saw action in WW2, Korea the jungles of Vietnam and anywhere else the Soviets sent them.

Several satellite Soviet countries manufactured the TT-33, but the majority of them are chambered in the bottle-necked 7.62x25mm cartridge. This 30-caliber pistol round produces incredible bullet velocities for a nearly 100-year old cartridge. In some cases, upwards of 1,500fps! This velocity makes the 7.62x25mm round very flat shooting, so stretching the legs on your Tokarev is fairly easy.

Aside from excellent projectile velocity, shooters should invest in a TT-33 (or one of the many clones) because the guns are still very cheap, and still available. They’re often under $250, which helps offset the cost of the ammo which is around 30-40 cents per round. But, given the limited popularity of the ammo, most online retailers still have the ammo in-stock for reasonable prices.

The majority of both 5.56mm and 7.62×39 ammo is either exhausted or priced outside of most people’s means. Shooters looking to scratch their modern sporting-rifle itch, need to think outside the Armalite box. Think AK, but not classic AK caliber.

The AK-74 was the Soviet Union’s answer to the 5.56mm M16. The ammunition is lightweight, flat-shooting and not nearly as expensive as 5.56mm. While the days of crazy inexpensive surplus 7N6 are dead and gone, new manufacture ammo is still budget-friendly.

As of the writing of this article, ammunition for the ‘74 was still in stock at most major ammo resellers. The only problem is that nobody really makes AK-74 clones currently. After the cheap surplus dried up, demand for the guns withered. So while shooters who already have a 5.45mm AK can still find ammo, it’s going to be tough to find any 74-pattern rifle online. Thankfully, if you live in a state with pawn shops, or if a shooter looks around for smaller mom and pop gunshops, the occasional 5.45mm AK pops up.

Shooters in search of one should stick to Arsenal, Romanian SARs and anything made by boutique companies like Krebs or Rifle Dynamics.

Having shot a PA-10 in 6.5CM out to a mile, I can attest the guns are unreasonably accurate. They’re also very affordable – especially if shooters buy the upper and lower separately and assemble at home.

Other great news, is that these guns are in stock right now at PSA. Sure, they are experiencing shipping delays, but literally everyone is. (If you live near a PSA brick and mortar, stop by and look around, they often have crazy in-store only deals!) Not only that, but should people start to panic buy magazines, SR-25 pattern magazines tend to be less desirable than 5.56 STANAGs, and thus can be found more easily.

As for ammunition, as of this article’s publication, .308 was still in stock at most places at relatively normal prices. Again, this is because like other rounds on this list, .308 Win is never cheap. This means it’s difficult to stock up on for shooters on tighter budgets (this is doubly so for 6.5 Creedmoor). The good news is that if you have the coin, the ammo, magazines and other components are available.

You knew these were going to be on the list, they’re America’s two most popular scatter-guns. This is for good reason, both are incredibly durable, and unstoppably reliable.

Another great aspect is their ballistic efficacy. Have you ever heard about the home-invader that took a point-blank 12-gauge buckshot blast to the chest and lived? No one has. These things are incredibly potent self and home-defense tools.

As for ammunition, 12 gauge shotshells are still available online and in local brick and mortars. Birdshot is fairly inexpensive and makes a great round to train with, but shooters worried about home-invaders or hypothetical zombies should invest in double aught buckshot. Full disclosure, quality buckshot is very pricey – around $1 a shell. The good news is that it doesn’t take many shots to stop a threat with a shotgun loaded with defensive ammo. Plus, with the addition of slugs, few firearms are as versatile as a shotgun.

While the panic-driven hordes are stripping store shelves of toilet paper and 5.56mm, shooters who waited too long to restock should invest in less popular guns and ammo. They won’t miss out on effectiveness, and they’ll actually be able to feed their guns to properly practice. Also, stop buying all the damn toilet paper.

Jim is a freelance writer, editor and videographer for dozens of publications who loves anything and everything guns. While partial to modern military firearms and their civilian counterparts, he holds a special place in his heart for the greatest battle implement ever devised and other WW2 rifles. When he’s not reviewing guns or shooting for fun and competition, Jim can be found hiking and hunting with his wife Kimberly, and their dog Peanut in the South Carolina Lowcountry.