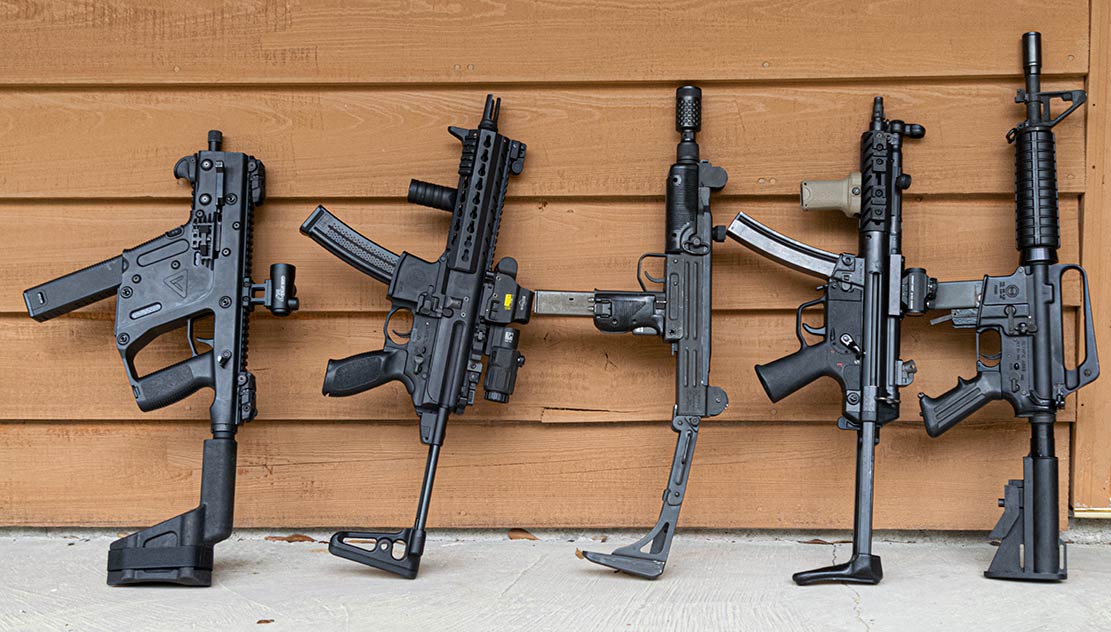 U.S.A. –-(Ammoland.com)- Registering a firearm as an SBR is a pain in the ass. Between the $200 tax stamp and waiting months just to install a stock, many shooters opt for a stabilizing brace instead. But some guns either don’t have a stabilizing brace available for them, or simply don’t look right with a brace installed.

And given the lengthy wait times, deciding on which gun to SBR is no small decision. And with so many guns available on the market today, we’ve narrowed down our list to just those chambered in pistol calibers.

So with that in mind, here are my top 5 pistols to SBR.

By modern standards, the original Uzi is someone obsolete. It is heavy, lacks modularity and it doesn’t even use Glock magazines! (Can you imagine?) But in its heyday, the Uzi was the gold standard for submachine guns.

Durable, reasonably accurate and incredibly reliable, the Uzi saw great success in service with the IDF. That’s because the gun itself is built like a tank. With the majority of it being built from steel, the Uzi is as strong as it is heavy.

But what makes the Uzi such an excellent candidate for conversion into an SBR, is how easy it is to convert. Basically, there are two ways to convert a firearm to an SBR. Either you reduce the barrel length to under 16 inches, or add a stock to a gun that already has a sufficiently short barrel.

With many designs, this means having a gunsmith cut your firearm’s barrel and thread it. This is both costly and time-consuming. With the Uzi, replacing the barrel is so easy it doesn’t even require tools.

Simply depress the barrel ring retainer, unscrew the barrel nut and pull the barrel free. That’s it. So in essence, shooters only need to buy a spare barrel once their tax stamp comes back. Easy. Plus, the gun fires inexpensive 9mm ammo, and feeds from very reliable, reasonably affordable 32-round steel magazines. And if nothing else, anytime someone asks you what it is, you can reply, “Uzi, 9mm” and that’s worth the cost of admission alone.

When SIG first announced they were producing a new submachine gun design back in 2013, more than a few people were caught totally off guard. After all, it was the age of the compact carbine. Pistol caliber carbines were being phased out for ultra-compact rifle caliber weapons because of their increased ballistic efficacy.

But the traditional, pistol-caliber automatic weapon still had value. With their reduced felt recoil, inexpensive ammo and lightweight construction, these guns are plenty effective within the confines of a building.

At that time, nearly every prolific submachine gun in existence utilized a simple, direct blowback action to reduce cost and increase reliability. And while this method of operation does accomplish these goals, it does so at the cost of extra weight and disproportionate felt recoil.

SIG decided on another approach: short-stroke piston operation. By utilizing a separate bolt carrier and piston, the MPX has a light reciprocating mass which translates into less recoil. Additionally, since the action features a locked breech, the gun won’t unlock until internal pressures have dropped sufficiently. This makes it both soft-shooting and better suited to use with a suppressor.

Add to that the fact the MPX borrows heavily from the AR-15 in the ergonomics and modularity department, and you’ve got a recipe for the perfect SBR candidate.

What makes the MPX particularly well-suited as an SBR is its combination of compact receiver, and collapsible stock that make the entire package a perfectly balanced pseudo subgun. Plus, like the Uzi above, the MPX can readily swap out barrels. Though unlike the Uzi, the MPX requires an allen key to remove from the receiver.

The only downside to the MPX is cost. Both the gun itself, and the magazines are a little pricey. Though thankfully, shooters can find previous generation MPX magazines for cheap if they shop around. For more information, check out www.sigsauer.com.

From the SAS siege on the Iranian Embassy to the fictional gunfight at Nakatomi Plaza, the MP5 is the defacto, “good guy” gun of the 1980s. And while Hollywood may have chosen the MP5 for its stellar looks, the SAS chose the stamped steel subgun for its peerless reliability and excellent accuracy.

Based on the G3 rifle, the MP5 is a roller-delayed 9mm submachine gun. The gun’s use of rollers to delay the action makes for a very soft-shooting little gun whose excess weight further soaks up what little recoil its 9mm rounds produce.

For those of us not drowning in disposable income, semi-automatic versions are available from a number of manufacturers. Some are crazy expensive, others are only somewhat expensive, but unfortunately, none of them are cheap.

What makes the MP5 a good candidate for SBR conversion? Out of all the furniture options available for the MP5, none of them are as comfortable as the original polymer fixed stock. Yes, the Navy-style collapsible models are excellent for transportation, and the Choate style MP5k stocks are neat too, but the original is just about perfect.  And at this moment, no company makes a brace that perfectly recreates the ergonomics of that stock. Plus, shooters who own an MP5k clone will probably want the iconic vertical grip installed on it. (Which is a big no-no that runs afoul of the NFA.)

As far as downsides, the only real shortcomings on the MP5 deal with cost. Both initial cost, and cost of ownership. The latter not being terribly unexpected given that the MP5 is made by HK. A company known for it’s pricey pieces. But, if you can spare the extra dough, the MP5 makes an excellent SBR. https://hk-usa.com/

The first gun on our list not chambered in 9mm parabellum, is the 10mm KRISS Vector. For the uninitiated, the Vector is a blowback-operated firearm that utilizes the Super-V recoil mitigation system to achieve insane rates of fire without becoming uncontrollable.

In essence, this recoil mitigation system redirects the reward recoil impulse downward, dramatically reducing it. I’ve had the chance to run the 9mm and .45 ACP versions in fully-automatic modes, and was able to easily keep the gun on target even during long bursts of automatic fire.

In fact, the biggest reason I recommend this gun in 10mm, is that it takes the normally stout recoil of 10mm auto and tames it 9mm levels. Essentially giving shooters an ultra-controllable SBR with ballistic efficacy nearly on par with some .44 Magnum loads!

In fact, the only reason I would have suggested shooters not invest in the 10mm Vector was recently solved by the engineers at KRISS-USA with their Mag Ex2. Previously, the largest magazine available for the 10mm Vector held a scant 15 rounds of ammo. But now, KRISS offers an extended 33-round magazine that gives shooters enough firepower to stop any threat.

But why should shooters make their Vector an SBR? For starters, when in rifle configuration, the Vector becomes unwieldy and overly long. And when configured as a pistol with a brace it lacks the ergonomic adjustability of an M4 style stock and the compact design of the side folding fixed Vector stock.

The biggest downside of the 10mm Vector is the price of keeping it fed. 10mm Auto ammo is not cheap. But the cost if the round can be mitigated by investing in a reloading setup. Still, if a shooter’s goal is a cheap plinker, the 10mm Vector (and any 10mm gun) isn’t the answer. But if they’re looking for a low recoil, high power compact weapon with outstanding reliability and capacious magazines, the Vector is ideal.

Admittedly, the inclusion of the AR-15 is a bit of a cop-out. That’s because it is the most accurate, most modular and most affordable firearm on the market today.

Combine these benefits with the linear layout and direct impingement operation gives the AR-15 unbelievably low recoil and exceptional accuracy.

But until somewhat recently, I didn’t consider pistol caliber AR-15 pistols and carbines as ideal SBR candidates. That’s because unlike their rifle caliber brethren, pistol caliber AR-15s tend to be direct blowback. This method of operation negates two of the biggest advantages of the Armalite: low recoil and lightweight.

But thankfully, the engineers at CMMG decided to take the path less traveled, and develop their rotary delayed Banshee series of AR-15s.

Available in 9mm, .45 ACP and 10mm Auto, the Banshee takes all the best features of the AR-15 and combines them with common, affordable magazines and a recoil-reducing method of operation.

What makes the AR a great SBR candidate is the same thing that lead to its ascension as America’s favorite rifle. Namely, modularity, affordability and top tier ergonomics. Plus, changing a pistol into an SBR is as easy as installing a buffer extension and stock (once you have your tax stamp).

Given the massive number of pistol caliber carbines and large format pistols on the market, there’s no way to cover every single firearm that would make a great SBR.

A few that I would have liked to include, but had to omit for the sake of brevity include the CZ Scorpion EVO, the PSA AKV and the MAC series of handguns.

Jim is a freelance writer, editor and videographer for dozens of publications who loves anything and everything guns. While partial to modern military firearms and their civilian counterparts, he holds a special place in his heart for the greatest battle implement ever devised and other WW2 rifles. When he’s not reviewing guns or shooting for fun and competition, Jim can be found hiking and hunting with his wife Kimberly, and their dog Peanut in the South Carolina lowcountry.