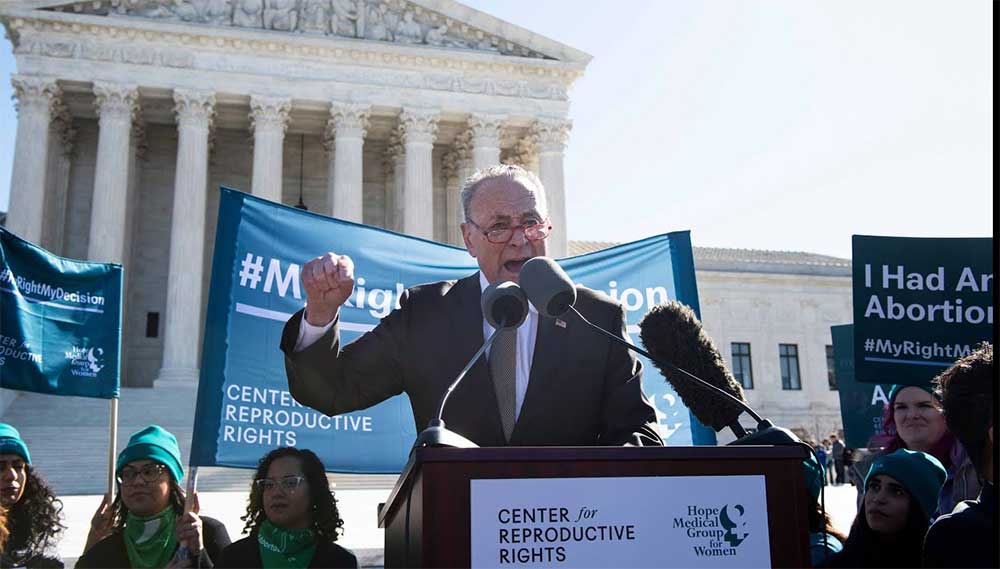 “I want to tell you, Gorsuch; I want to tell you, Kavanaugh: You have released the whirlwind, and you will pay the price. “You won’t know what hit you if you go forward with these awful decisions. We will tell President Trump and Senate Republicans who have stacked the court with right-wing ideologues that you’re gonna be gone in November, and you will never be able to do what you’re trying to do now ever, ever again!” Schumer, speaking at a pro-Abortion rally run by the “Center for Reproductive Rights”

Senate Democrat Party Minority Leader Chuck Schumer’s recent threat directed to two U.S. Supreme Court Justices—Neil Gorsuch and Brett Kavanaugh, both Trump nominees—is outrageous, shameful, reprehensible, and unforgivable, surely; and it deserves our Nation’s condemnation, of course. But there is something in Chuck Schumer’s actions more disconcerting and alarming than the rant itself: something below the surface that is both telling and dire.

Consider where Senator Schumer delivered his rant: Note, it wasn’t delivered to his fellow Senators in the U.S. Senate Chamber. He delivered his rant on the steps of the U.S. Supreme Court in front of a crowd of angry pro-abortion demonstrators, during an oral hearing on a Louisiana abortion case.*

Schumer’s choice of forum was no accident. Schumer, has consciously, presumptuously, arrogantly, and inexcusably attacked the very fabric of the Nation itself: the U.S. Constitution. He has disgraced himself and the Chamber of Congress he represents, the U.S. Senate, even as he, quite apparently, seems oblivious to this. But he has also shown visible contempt and disdain for the Nation, for the Constitution, and for the American people.

Instead of using his stature as a U.S. Senator to reduce anger and tension, Schumer ramped it up; and he did his rabble-rousing in front of a sympathetic Press, for maximum effect. Schumer knew exactly what he was doing. It is nothing new. We have seen this before, and often. Creating divisiveness among the populace and fomenting violence comes straight out of the Radical Left’s playbook.

A Tutorial in Government for The Senate Minority Leader, Chuck Schumer:

Listen Up Chuck! You Apparently Think A Constitutional Republic Is Equivalent to A Parliamentary Democracy; It Isn’t!

This may be news to you, Chuck, but, in the U.S., unlike the UK, no Branch of our Federal Government takes its orders from any other. Yet, you presume to tell the high Court how it is to decide cases. Your remarks amount to an imperative that the U.S. Supreme Court—the Third Branch of the Federal Government—is expected to take its marching orders from the Legislative Branch. The idea is not only false, ridiculous and impertinent; it is repugnant and dangerous.

Apart from your intimidation of two U.S. Supreme Court Justices, and apart from your incitement to violence—as you have made your remarks in front of an angry mob—you have denigrated the doctrine of separation of powers among each Branch, and you have deprecated the importance of our system of checks and balances among the Branches. You are laying the foundation for a Legislative Branch power grab and urging infighting among the Three Branches of Government. Your remarks do nothing but weaken the integrity of our Three Branch system of Government. Whether through callous disregard of the impact of your actions, diabolical planning to disrupt the operations of Government, or simple, inherent, irreverent stupidity, you have harmed our Nation, perceiving it to be something it is not and ought not to be. Our Government isn’t modeled after that of the United Kingdom and was never meant to be.

The United Kingdom, unlike the United States, is a parliamentary democracy, it isn’t a free Constitutional Republic. In fact, the UK doesn’t even have a Constitution. “The UK Parliament is a ‘sovereign parliament’ – this means that the legislative body has ‘absolute sovereignty’, in other words, it is supreme to all other government institutions, including any executive or judicial bodies. This stems from there being no single written constitution and contrasts with notions of judicial review, where, if the legislature passes a law that infringes on any of the basic rights that people enjoy under their (written) constitution, it is possible for the courts to overturn it. In the UK, it is still Parliament (and not the judges) that decides what the law is. Judges interpret the law, but they do not make the law.” See, the Law Teacher

In the UK, Chuck, you would have the authority to tell the judges what the law is. But, in the U.S., Chuck, you have no such authority to tell our U.S. Supreme Court what the law is. That is the sole duty of the High Court, as made clear in Article Three of our Constitution, and in an early seminal U.S. Supreme Court case, Marbury v. Madison, 5 U.S. 137 (1803).

And, yes, Chuck, sometimes the decisions of the Justices are unpopular to some people.** But it is the duty of the High Court to defend the Constitution as written.

Contrariwise, there is nothing in the Bill of Rights of the Constitution to even suggest that murdering an unborn child is a fundamental, natural, unalienable right.

You and your ilk, Chuck, have an odd predilection for denying the existence of fundamental rights etched in stone in our Constitution when you happen to find such rights distasteful to your sensibilities; and, curiously, you harbor no reticence in creating “new fundamental” rights out of whole cloth where none exists in the U.S. Constitution.

But, neither you, nor New York Governor Andrew Cuomo, nor any other person has the authority to rewrite the Constitution to cohere to personal philosophical quirks.

Asserting a fundamental right to murder an unborn child does not make it so. And to coerce the U.S. Supreme Court to create a work of fiction out of the Constitution is crass, presumptuous, foolhardy, and even demented. See Arbalest Quarrel’s article, published on September 27, 2019, titled, “What Does Abortion Have To Do With Gun Control: Nothing? Perhaps Everything!”

You pompously declare: “My point was that there would be political consequences for POTUS and Senate GOP if their newly appointed justices stripped a woman’s right to choose. We have an obligation to the women of America to fight for their constitutional right to choose.” See quotation from Newsmax

You have personal thoughts concerning abortion, Chuck. Fine. We get it! So, then, write an Op-Ed for The New York Times or the Washington Post or some other Radical Left rag. If you prefer, pontificate to the American people on the floor of the Senate or remonstrate loudly on CNN or MSNBC. But, do not purport to tell a co-equal Branch of Government what the law is when it is the duty of the Court, not you, to say what the law is. It is not up to you to thrust your personal annoyances onto the U.S. Supreme Court. And, yes, Chuck, the Justices have an obligation too, no less than the Legislature. You operate within your province, Chuck, and let the high Court operate within its province.

What you and the wild new wave Radical Left and new Progressive Left want to accomplish is the very antithesis of what the founders sought to prevent: the destruction of a free Constitutional Republic. Political activism has no place on the U.S. Supreme Court.*** Your inept attempt to explain your actions doesn’t absolve you of your sin against the Nation and the American people. Instead, you only dig a deeper hole for yourself.

Our Judiciary must show modesty even as you, Chuck, and most members of your Party, never demonstrate modesty and have no desire to do so. Yet, if you wish to play the Fool, Chuck, then have at it. But, henceforth, please refrain from playing the Court Jester in front of the Nation’s High Court.

* June Medical Services LLC v. Russo, the justices consider whether Louisiana’s law requiring abortion doctors have admitting privileges at nearby hospitals conflicts with the court’s decision just four years ago in Whole Woman’s Health v. Hellerstedt striking down a similar law in Texas. There is also the cross-petition from Louisiana about whether abortion providers have third-party standing to challenge health and safety regulations on behalf of their patients. June Med. Servs. L.L.C. v. Russo, 2020 U.S. LEXIS 905, | __ S.Ct. __ | 2020 WL 871679; February 24, 2020, Decided; No. 18-1323.

** “Since judges must sometimes make unpopular decisions, their power depends greatly on their sense of public legitimacy. And of course, they should be accountable in the public arena. But when public figures—especially legislators who have the power to weaken our courts—cross the line from ordinary criticism to destructive and misleading attacks on the very work of the courts, they send a signal to the public that the judiciary’s work is not to be respected.” BROWN V. BOARD OF EDUCATION AND ATTACKS ON THE COURTS, 37 The Brief 66, by Bert Brandenburg

See Stake Organization“Justice at Stake, founded in 2000, was a nonpartisan organization dedicated to securing fair and impartial courts, by educating the public about the role of the courts, and advocating for reforms protect courts from politics and special interest influences. After 16 years as a leader in the fair courts field, in 2017, Justice at Stake closed its doors. This page preserves some of Justice at Stake’s resource pages, reports, and videos.”

*** “I think his idea that judges should show modesty and be faithful to the Constitution, his expression that the greatest threat to the Court could be judicial activism, where the people feel the judges are not faithful to the Constitution and are imposing their political views on the people that are not required by the Constitution, that this is a threat to the rule of law because at some point in the future the Court may have to call on the American people to do things they do not want to do, they may not be popular, to be faithful to the Constitution. To erode and give away that good respect the American people have for the courts and the law would be a mistake.” Prescient comments of Senator Jeff Sessions, during the Senate’s debate on consideration of John Roberts nomination to the U.S. Supreme Court in 2005. EXECUTIVE SESSION, 151 Cong Rec S 10395, September 26, 2005

About The Arbalest Quarrel:

Arbalest Group created `The Arbalest Quarrel’ website for a special purpose. That purpose is to educate the American public about recent Federal and State firearms control legislation. No other website, to our knowledge, provides as deep an analysis or as thorough an analysis. Arbalest Group offers this information free.

The Survival Shakedown – Are You Up For The Challenge?
Official who refused to cooperate with illegal AZ hand-count describes threatening environment in resignation letter
Bushcraft Kitchen Part 4 Wooden Trencher
Nicholas Kristof: A smarter way to reduce gun deaths
Say or do what is necessary now or forever hold your peace!