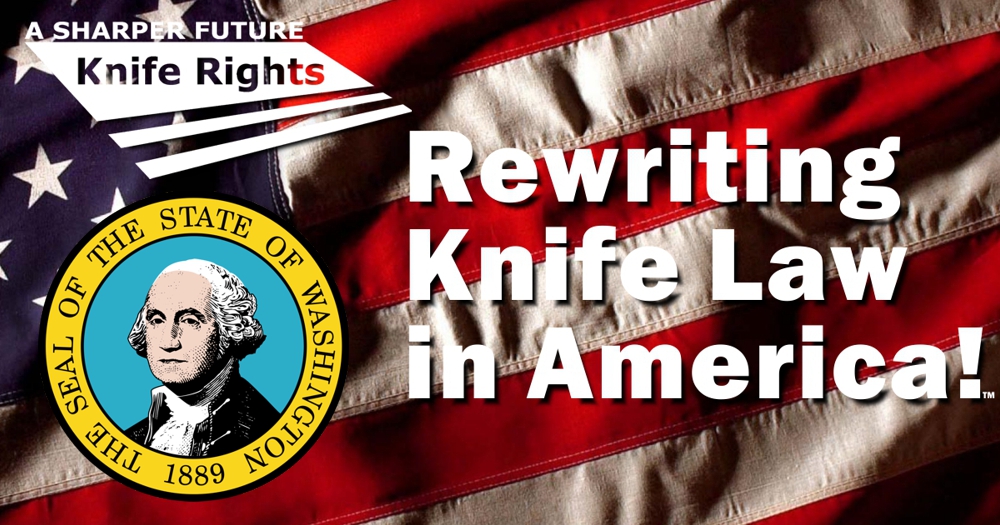 U.S.A. –-(Ammoland.com)-  Despite two years of hard work by all involved and numerous trips to Olympia by Knife Rights Director of Legislative Affairs Todd Rathner, including a last-minute “fire drill” this week to manage proposed floor amendments to the bill, the Washington State House of Representatives again failed to vote on SB 5782, the “Spring Blade” (Switchblade) Knife Ban Repeal bill, before the March 6 cutoff for bills originating in the Senate.

Unfortunately, this means that we will have to start the process all over again in the next legislative session in 2021.

However, Knife Rights has earned its bones through our tenacity and we don’t let setbacks, even extremely frustrating ones like this, deter us from our mission. Our success passing 31 bills repealing knife bans in 22 states and over 100 cities and towns has taught us that persistence is key and we will be back to get this done.

Thanks to the hundreds of Washingtonians who used Knife Rights’ Legislative Action Center to email legislators. It had a huge impact in getting us as far as we did.

Knife Rights would also like to thank retiring SB 5782 sponsor Senator Hans Zeiger for his herculean efforts to try to get this done. Washington Representative Morgan Irwin also played a crucial role and will be there for us in the future.

A special note of thanks to Mike Vellekamp of VNives for all of his efforts trying to get the bill across the finish line. Mike was there for every hearing and was with Todd all the way. Also thanks to SOG Knives founder Spencer Frazer for his excellent supportive testimony in committee.

We’d also like to thank NRA’s Keely Hopkins and Phil Watson from the Firearms Policy Coalition for their advice and assistance. Finally, a big thanks to Knife Rights supporter and Washington state lobbyist Brad Banks for his generous assistance and guidance.

Knife Rights’ key to success? We NEVER give up! We’ll be back!

Knife Rights is America’s grassroots knife owners’ organization and the Second Front in Defense of the Second Amendment™. Knife Rights is Rewriting Knife Law in America™ and forging a Sharper Future for all Americans™. Knife Rights efforts have resulted in 31 bills enacted repealing knife bans in 22 states and over one hundred cities and towns since 2010.