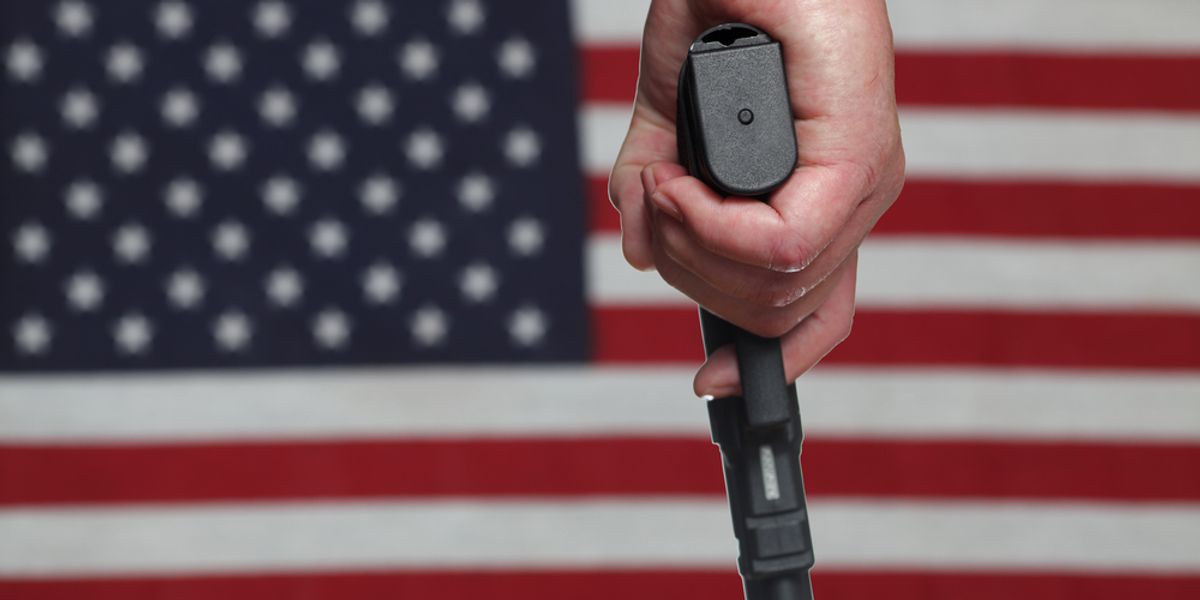 We’re the only developed country in the world that unconditionally allows civilians to own military-style assault weapons, that allows “open carry,” and that lets gun manufacturers openly buy politicians (thanks, SCOTUS).

As a consequence, we’re also the only country in the world where the leading cause of death for children is being blown apart by bullets.

America has just a bit more than 4 percent of the world’s population, but, with more guns than people in our country, we have more than 40 percent of all the civilian guns in the world.

Specifically, as a Swiss-based research group found, there are “approximately 857 million civilian-held firearms in the world’s 230 countries and territories” and, as ABC News points out, in America, there are “over 393 million firearms in civilian possession” as of 2017.

About ten million more have been sold in the US since then: we are the only nation in the world with more guns than people.

For every 100 people in America, there are 120 guns. Among developed nations, next highest on the list is Canada, at 34 per 100 people, and all other developed countries are lower down the list than that: South Korea, Taiwan and Japan, for example, all clock in at fewer than one gun per 100 people.

This is entirely a recent phenomenon. Before the Reagan Revolution, gun ownership numbers in America resembled Canada’s.

Today, however, America not only leads the world in gun ownership but, predictably, we also lead the world in gun deaths. As an exhaustive study of gun deaths in the world’s 23 wealthiest countries published in The American Journal of Medicine found:

Fully 82 percent of all the human beings living in the world’s wealthy countries killed by firearms lived in the USA.

Other countries have gotten their gun violence under control by simply reducing the number of guns in circulation and requiring gun owners to do two of the three things we do across America for car owners: be licensed and register your weapon.

I’d add that we should include mandatory liability insurance like we do for cars: the insurance companies would then sniff out the “high-risk” gun owners and refuse to insure them, thus preventing them from easily and legally owning a gun.

On the other hand, Republican politicians are moving in the opposite direction, endorsing gun violence and terror: then-Republican Congressman Madison Cawthorn said after the Rittenhouse verdict that Republicans should “be armed and dangerous” while Marjorie Traitor Greene said, “[G]un rights are the only thing holding back the Communist Revolution the Democrats are waging.”

Because neofascists like these in the GOP continue to try to push America toward armed civil war, opposition to gun control appears to be an issue that animates Republicans — seemingly enthusiastic about seeing Democrats and people of color die at the hands of vigilantes — far more than Democrats.

It used to be that Republicans opposed gun control because of the NRA’s money, but the NRA is now a shell of its former self. Today, it appears they’re opposing rational gun control measures because so many of them are openly promoting gun-based right-wing terrorism on America’s streets.

America is caught in a crossfire between gun manufacturers bribing politicians with the blessing of 5 corrupt Republicans on the Supreme Court, and a fascist movement fed by billionaire-owned media machines that have seized control of the GOP.

Mass shooters and child killers are celebrating. Meanwhile, Republican politicians vow to protect us and our kids from — wait for it — librarians and history teachers.

The rest of the world is looking at us, boggled. It’s way past time to wake the hell up and do something about guns. The number to call your members of Congress is 202-224-3121.