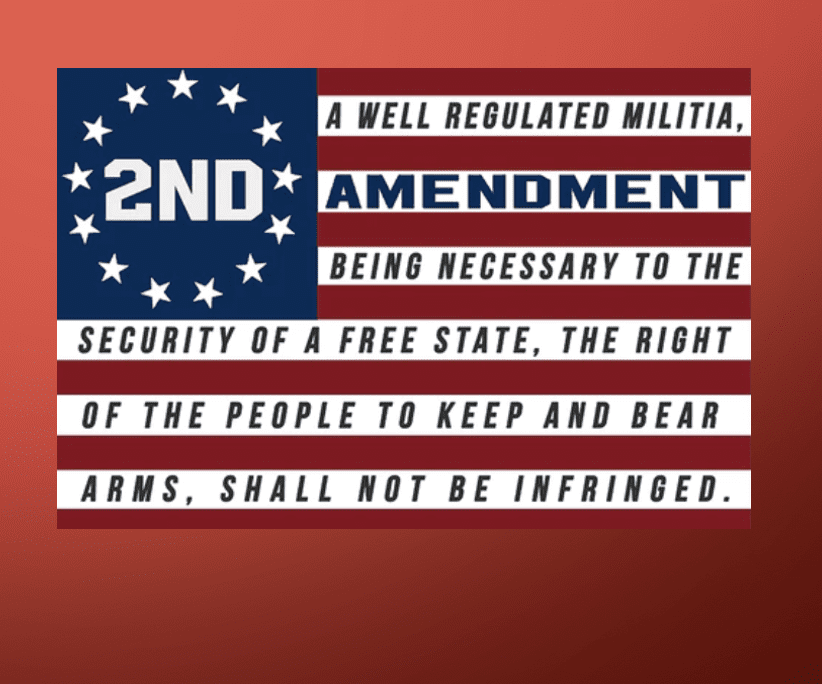 As the New Year is rolling along so are the lawsuits that look to protect the Second Amendment (2A). At last count there are 16 total magazine ban or Modern Sporting Rifle lawsuits in the US and that number is still growing, though some cases are being consolidated to save time. Notice the words “assault weapons” were not used and instead Modern Sporting Rifle. Modern Sporting Rifle is the correct phrase as AR-15s are in common use in the United States. The Assault weapon  term is most often used by the media and politicos and anti-gun advocates to create hysteria. That is what the true use of the term “assault weapon” is all about. If politicians truly wanted to protect the citizens, they would not be allowing violent criminals out on cashless bail like what is happening in New York,  Illinois, and other states.

The bottom line is gun control is about control, period. As history has so well taught us, an unarmed society is a society of subjects. The Tiverton Town Council vice president acknowledged the fact when he told Sakonnet River outfitters (Sakonnet River was up for license renewal) – “We will control it (you)” at a town hearing. That is exactly what the entire anti-gun community has in store for us. Some have said it is a Stalinist approach toward a new world order. In some states, law enforcement is saying openly that they have had enough. 80 of 102 Illinois county sheriff departments have said they will not enforce the recent Illinois “Modern Sporting Rifle” ban.

“Common sense” gun laws (another buzz phrase used)  are a violation of the Bruen Decision (June 2022). Modern Sporting Rifles are completely protected by this decision and the Second Amendment. Rhode Island is not its own country and therefore MUST abide by the constitution. The Magazine Ban (over 10 rounds) is on its way to being overturned in 5 states. When that happens here, Rhode Island will be on the hook for financial damages to the plaintiffs.

Hysteria based “Assault Weapons” bans will have the same end result. Not only will successful plaintiffs receive a financial reward but this time they will be suing all politicians, individually for malpractice for clearly violating the constitution. Who knows? We may own a nice home in Cumberland or a home in East Greenwich or a nice condo in Warwick. After the Rhode Island politicians and the state have their wallets emptied a few times maybe they will come to the idea “maybe we should leave the law-abiding gun owners alone!”

Foxnews.com tried to create some hysteria or sensational headlines the other night by announcing the US Supreme Court handed the gun community a severe blow. That was nothing more than fake news, but 2A supporters were not concerned. What actual happened was gun shop owners filed an emergency appeal for SCOTUS to issue a stay on the New York Concealed Carry Improvement Act. SCOTUS declined and that was to be fully expected. It was an interlocutory appeal which is, by definition, asking the higher court to intervene before all the facts are heard in the lower court. Courts granting this type of appeal are extremely rare, but it does no harm in asking (yes, Mark Smith (Owner of the 4 boxes Diner), I am listening intently to your legal lectures).  So, again, it was no surprise it was denied.

Further, the New York State Rifle & Pistol Association vs Bruen plaintiffs attempted 10 days ago to have SCOTUS intervene in the very same manner, but they were refused by SCOTUS.  It must be noted that SCOTUS did, in fact, warn the 2nd Circuit Court of Appeals that they must explain why they implemented a stay on the TRO (Temporary Restraining Order) against NY’s CCIA immediately or expedite the case forthwith. SCOTUS also stated that if the case gets dragged out that petitioners can feel free to reappeal.

At last count there were 16 total magazine bans and “Modern Sporting Rifle” cases in the federal courts. Some are remands from SCOTUS. Some are now combined to save time and money. Federal district court in New Jersey is now combining cases as the federal judges already know the final outcome. This writer would bet his estate on the fact that all current gun cases will be found in the gun owners favor.

Add to the list of gun cases that SCOTUS accepted, a case involving a non-violent felon who served out his penalty and now has petitioned SCOTUS for a Writ of Certiorari to restore his 2nd amendment rights. Surprisingly SCOTUS accepted the case. Guess the outcome?  Keep in mind that Justice Amy Comey Barret already wrote that she feels non-violent felons should have their gun rights restored.  Did I mention she is also a gun owner?

The 5th Circuit Court of Appeals ruled against BATF (Bureau of Alcohol Tobacco and Firearms) and said that bump stock bans are unconstitutional. I must admit that I did not see that coming. With the previous mentioned case facts, the sky is the limit for gun owners. RI politicians must be put on notice as 85% of 11-47 is unconstitutional. What better time for the 18 and 19-year-olds in Rhode Island to initiate another lawsuit against the state in the banning of 18, 19 and 20-year-olds  the right to buy rifles and shotguns and ammo, plus require all residents to show a permit blue card or hunter education card to purchase ammo. Those laws are destined to be declared unconstitutional, and hopefully the plaintiffs recover millions in financial damages.

This writer is currently interviewing these teenagers as plaintiffs, and they are very well educated.  The common theme is “who do these politicians think they are? I can risk my life in the military and use all types of firearms and cannons; I can vote; I must pay taxes; I enjoy freedom of speech and all the other constitutional amendments; except I cannot exercise my God-given right to own arms which is protected by the Second Amendment. We already are seeing what will happen to this egregious anti-gun law in the end.

While writing this article it dawned on me that I must mention the fact that RI legislators cannot seem to write a coherent bill. The mentioned Under 21 purchase ban was Bill S-2637, Substitute A, that was signed by the Governor on 6/21/2022. The incoherent portion of this bill is in lines 17-19 of page 2. These lines state that any nonresident member of the armed forces of the United States who is stationed in this state and who is twenty-one (21) years of age or older, may, upon application, purchase or acquire a rifle or shotgun.  However, they contradict themselves on page 4 in 11-47-37.1 – Persons exempt from age restrictions. The provision of § 11-47-35.2 prohibiting the sale of rifles and shotguns to any person under twenty-one (21) years of age and the provisions of § 11-47-37 shall not apply to full-time members of the State Police, full-time members of the State Marshal’s office, full-time members of city or town police departments, or state marshals, or correctional officers, or persons while serving on active duty as a member of the United States armed forces or organized reserved or National Guard. So, can military members under the age of 21 buy rifles and shotguns, or not? Apparently, we cannot trust politicians to write coherent laws, how can we trust them to do anything else correctly?  The next question that comes to mind is – does this now invalidate the law?

Even novices and non-gun owners can understand the 2A situation, and especially in the times we are living, that “to take away these common use magazines takes away a person’s right to personal self-defense”. It’s a fundamental concept Democrats and a few RINOS should be able to understand as well. My friends and colleagues stated that 2023 is showing signs of improvement. I agree. There is a lot to be hopeful for regarding the Second Amendment. Last year I mentioned the Bruen case was the 2A’s Battle of Midway.  Keep in mind that WWII lasted 3 more years after the Midway Battle. A current analogy to WWII would be the current 2A status is equivalent to the Marshal Islands campaign. The right to self-defense outdoors in “Stand Your Ground” will be our Battle for Iwo Jima”.  A nationwide “Stand Your Ground” is gaining momentum.  Be patient, victory over the anti-gunners will happen.  It will happen in the courts. Instead of donating money to politicians, donate to these excellent groups: Gun Owners of America, Firearms Policy Coalition, Second Amendment Foundation, National Foundation of Gun Rights.  Please like and Subscribe to Guns and Gadgets, 4 Boxes Diner, and Washington Gun Law on YouTube.  See you on the range.

Jeffrey “Jeff” Gross spent 21 years as an Analytical Chemist at the USCG R&D Center in Groton, Connecticut, Woods Hole Laboratories, and Helix Technologies. Changing careers is a “great learning experience for everyone”, Jeff says, and I’m an avid outdoorsman and conservationist, a student of the sciences, and the world. The US holds too many wonders not to take a chance and explore them”.

His subjects include Outdoors, Second Amendment, Model Railroading, and Whimsical.

He can be reached at: trainsbythe144@aol.com