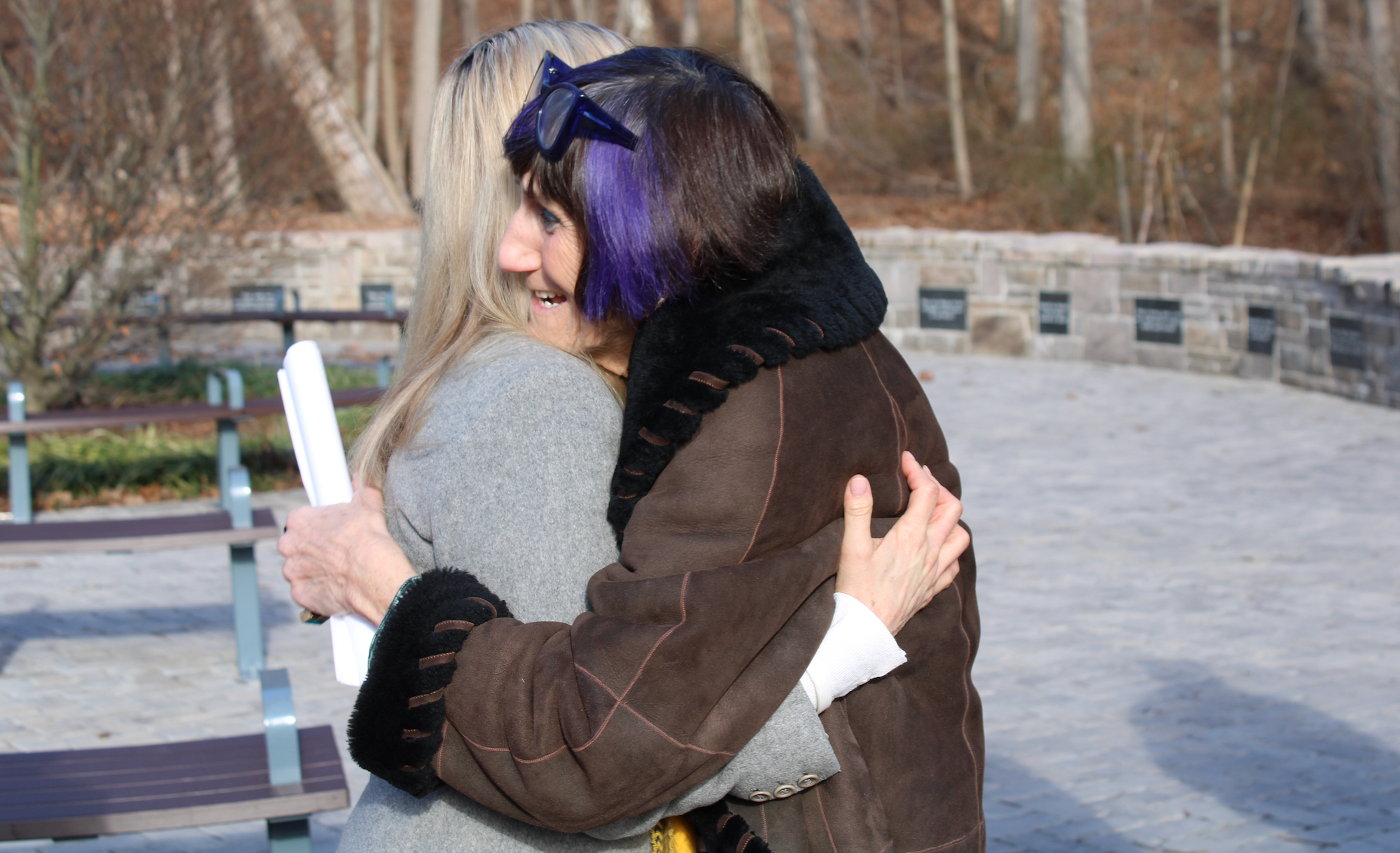 The latest chapter in the quest to tackle deadly American gun violence began Wednesday with a mix of optimism and cold realism, in a New Haven garden created in that spirit.

The occasion was a press announcement by New Haven U.S. Rep. Rosa DeLauro and Connecticut U.S. Sen. Richard Blumenthal that they are reintroducing ​“Ethan’s Law.” The proposed measure (read details here), passed the House of Representatives last year but did not make it into a final version of a bipartisan gun-safety law that did pass. It would set safety standards and violation penalties for home storage of firearms in the hope of preventing suicides and unintentional shootings, especially of young people.

Wednesday’s press event took place on what would have been the 20th birthday of Ethan Song of Guilford, after whom the law was named. Song accidentally shot himself to death in 2018 at the age of 15 at his best friend’s house with a gun improperly stored in a Tupperware box with the gunlock keys and ammunition nearby. Connecticut in 2019 passed a version of the law in Song’s name. The lawmakers were joined at Wednesday’s event by Ethan Song’s parents Kristin and Mike Song as well as New Haven Mayor Justin Elicker.

The event took place in the shadow of West Rock at the New Haven Botanical Garden of Healing Dedicated to Victims of Gun Violence. Mothers of murdered young New Haveners created the garden in 2021 as an Edenic spot where fellow family survivors of gun homicides can wrestle with the hard reality of their losses and summon strength and purpose to move on as individuals and as a community. It also serves to keep New Haven focused on the ongoing loss of life and on possibilities for action to reduce fatal gun violence.

“This is a place of hope,” DeLauro said at the event. She said she already has 110 cosponsors and expects more by the time she formally reintroduces the bill on Jan. 31.

“We came so close” last year to passing the law, Blumenthal noted.

Looming over the announcement was the hard reality of the changing makeup of the U.S. House of Representatives: Republicans now have the majority, with hard-right anti-gun-control party members exerting influence. That could make it harder to pass the bill in that chamber this year, let alone have it end up in any negotiated House-Senate firearms bill.

DeLauro and the two senators present — including Chris Murphy, the lead Democratic negotiator in last year’s successful bipartisan bill — openly acknowledged that the GOP House takeover presents new challenges to passing Ethan’s Law. (Opponents have characterized the bill as an unnecessary violation of their interpretation of the Second Amendment.)

DeLauro and her colleagues also argued that other facts support reality-based optimism.

“We came so close” last year to passing the law, Blumenthal noted. Fifteen Republican senators supported the passage of the eventual package of gun-control measures (called the Bipartisan Safer Communities Act) showed ​“we can break the grip of the NRA.”

Murphy noted that a majority of Americans — ​“Democrats and Republicans, left and right” ​“across the country” — now support gun-control and gun-safety measures, especially low-hanging fruit like this one, which ​“doesn’t take a gun from a single American.” That support grows amid reports that ​“every single day there’s a child being killed by an unsecured gun.”

Murphy credited a mass movement, growing over the 10 years since the Sandy Hook and Parkland shootings, for changing the politics in D.C. ​“We are now in an era when the gun safety movement wins,” he said. The lawmakers expressed confidence that they can find enough House Republicans from swing districts to support Ethan’s Law as a matter of reelection survival.

“I’m not a pollyanna,” DeLauro said. ​“I know it’s going to take the advocacy of all of us here [and] people around the country. It will not be for lack of trying.”

The group spoke steps away from the brick-lined pathway leading into the garden etched with the names of all New Haveners killed by gun violence since 1976. The 1994 section included the name of Danielle Monique Taft, an 8‑month Dixwell girl whose murder helped influence the state to pass a gun-control bill that year.

Marlene Miller-Pratt (pictured above) stood to the side listening as the politicians spoke. Miller and two fellow moms of gun violence victims came up with the idea of the botanical garden and made it happen. She has since dedicated her life to offering support for other parents and working with young people to prevent further shootings. She has also lent advice to organizers of similar efforts in other cities, including Philadelphia.

She noted Wednesday that the first five months of 2022 elapsed with no homicides, no new bricks in the pathway. She allowed her hopes to rise. Then came 14 more names to etch into bricks. 2023 is barely two weeks old; three new bricks now need to be added.

So Miller-Pratt has no illusions about the challenge she faces. She also sees no alternative to surrendering to hopelessness. ​“I keep telling myself: We have to continue to press forward,” Miller-Pratt said. ​“I will continue this fight against gun violence. It’s personal.”