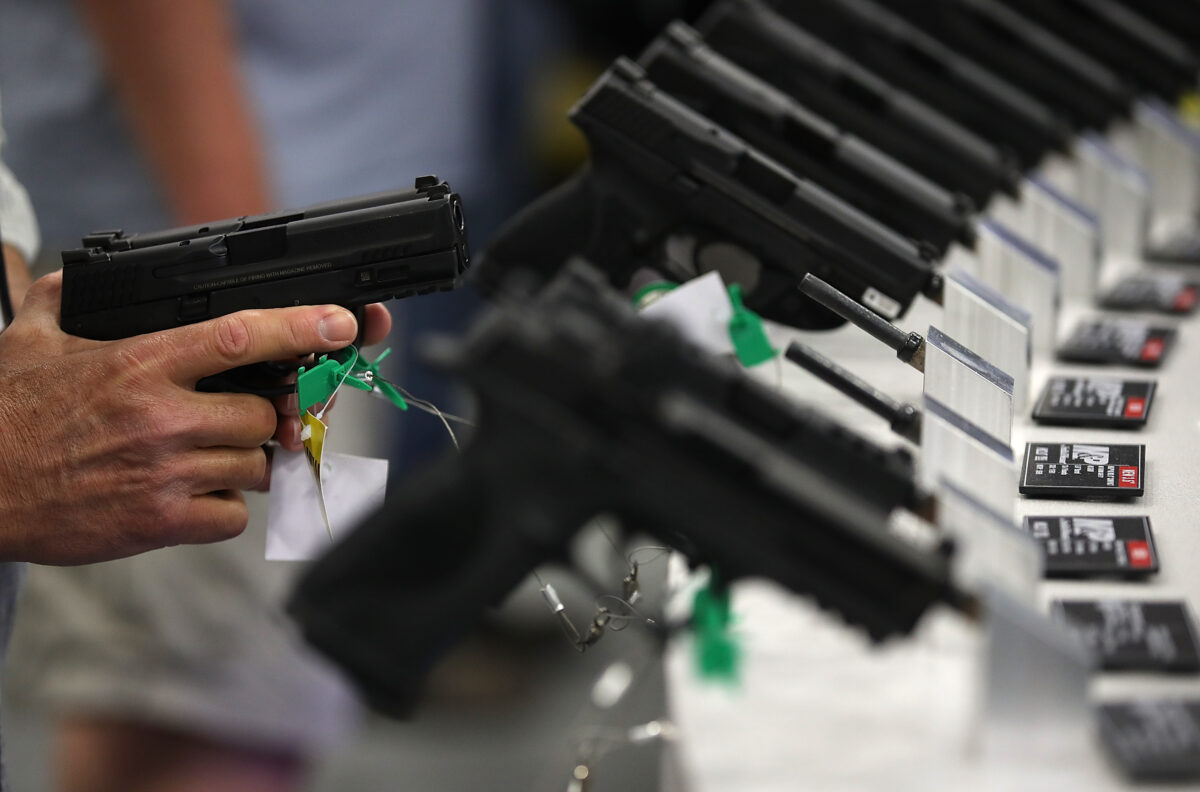 DOJ said in a press release on Jan. 13 that it has submitted the final rule to the Federal Register, formalizing the regulation that Biden pushed for in April 2020 after it was found that a shooter who killed 10 people at a grocery store in Boulder, Colorado, used a stabilizing brace.

Under the new rule (pdf), anyone manufacturing, selling, or using stabilizing braces—defined in the rule as devices that can be used to shoulder-fire pistols like rifles—must now comply with laws regulating short-barreled rifles, including background checks for transfers and additional taxation.

In some cases, these devices can also serve as a kind of shoulder stock to a short-stocked firearm and allow a shooter to shoulder a pistol and operate it like a short-barreled rifle.

The Bureau of Alcohol, Tobacco, Firearms, and Explosives (ATF) said that the rule does not affect stabilizing braces that are “objectively designed and intended as a ‘stabilizing brace’ for use by individuals with disabilities, and not for shouldering the weapon as a rifle.”

“Such stabilizing braces are designed to conform to the arm and not as a buttstock,” the agency said of devices that would be excluded from the new rule.

For decades, short-barreled rifles—ones that have barrels shorter than 16 inches—have been subject to strict regulations, including a law known as the National Rifle Act, which imposes additional requirements like background checks for all transfers, including private ones.

ATF director Steven Dettelbach said in a statement that back in the days of Al Capone, Congress said that short-barreled rifles and sawed-off shotguns should be subjected to greater legal requirements than most other firearms because they have the greater capability like long guns, but are easier to conceal, like pistols.

“This rule enhances public safety and prevents people from circumventing the laws Congress passed almost a century ago,” Dettelbach said, adding that some stabilizing braces have been designed to work like buttstocks rather than to strap onto the arm.

“Certain so-called stabilizing braces are designed to just attach to pistols, essentially converting them into short-barreled rifles to be fired from the shoulder. Therefore, they must be treated in the same way under the statute,” he said.

The rule goes into effect immediately upon publication in the Federal Register, with a 120-day period for manufacturers, dealers, and individuals to register any existing short-barreled rifles covered by the new rule tax-free.

Any weapons with stabilizing braces or similar attachments that qualify them under the new rule as short-barreled rifles under the NFA must be registered no later than within 120 days, or modified by removing the brace and restored into a regular pistol, or turned into a local ATF office, or destroyed.

Restrictions on stabilizing braces have been the subject of intense debate after the ATF proposed them in 2020.

The rule has faced pushback from Republicans and gun-rights groups like the National Rifle Association, which pointed out they were originally designed for disabled veterans.

West Virginia Attorney General Patrick Morrisey said in a statement that the “egregious” rule makes it “harder for senior citizens and people with disabilities to defend themselves.” He added that his office was “evaluating our legal options.”

The Second Amendment Foundation said it would challenge the rule in a lawsuit.

Gun Control ‘By a Thousand Cuts’

Tim Harmsen, an Indiana-based firearms dealer, told The Epoch Times in an earlier interview that, in his view, the ATF has an ulterior motive with the new rule than reducing crime.

Harmsen said it’s a strategy of gun control “by a thousand cuts.”

“The anti-gunners are playing the long game. They know they have time on their side,” said Harmsen.

The bill would remove short-barreled rifles, short-barreled shotguns, and certain other weapons from the definition of firearms for purposes of the National Firearms Act.

“We now await the publishing of the Biden administration’s rule attempting to turn millions of law-abiding citizens into felons unless they comply with the ATF’s vague reinterpretation of what constitutes a short-barreled rifle, despite Congress taking no action to amend Federal law on this matter.

“My bill is the only way to ensure the Constitutional rights of gun owners are protected against the ATF’s reckless abuse of the NFA to justify its pistol brace rule,” said Marshall.

The number of Americans impacted is difficult to determine. The ATF estimates that 3 million pistol braces have been sold. Second Amendment advocates say the number is closer to 40 million.

On the campaign trail and since taking office, Biden has pledged to get tougher on guns, citing the need to curb gun-related violence.

Biden has publicly said he would back measures that ban magazines that carry 10 rounds or more—which are very common and are owned by millions of Americans—and so-called assault weapons, a term that some Republicans have said isn’t clearly defined and intentionally vague to allow the gun-control net to be cast more widely.

A widely cited study (pdf) released by the Department of Justice found that assault weapons were “rarely used” in gun crimes, but the DOJ concluded that the 1994 ban on them may have had a larger impact if it remained in place after 2004.

For years, Biden and Democrats have sought to criminalize what they describe as “high-capacity magazines,” which also aren’t clearly defined, much like “assault weapons.”

Legislation introduced in 2021 in the U.S. Senate would ban magazines that hold more than 10 rounds, mirroring regulations in a dozen states, including California and New York.

The Department of Justice wrote in a 1999 report (pdf) that a 1994 federal ban on such magazines didn’t lead to a significant drop in shootings or murders.

In June 2022, Biden signed a gun control measure into law, representing the most sweeping gun law in decades.

Key provisions of the legislation include expanding federal background checks for buyers between the ages of 18 and 21, adding incentives for states to adopt so-called red flag laws, expanding access to mental health programs, and enhancing school security in a bid to prevent mass shootings.

Michael Clements and Jack Phillips contributed to this report.

Tom Ozimek is a senior reporter for The Epoch Times. He has a broad background in journalism, deposit insurance, marketing and communications, and adult education.