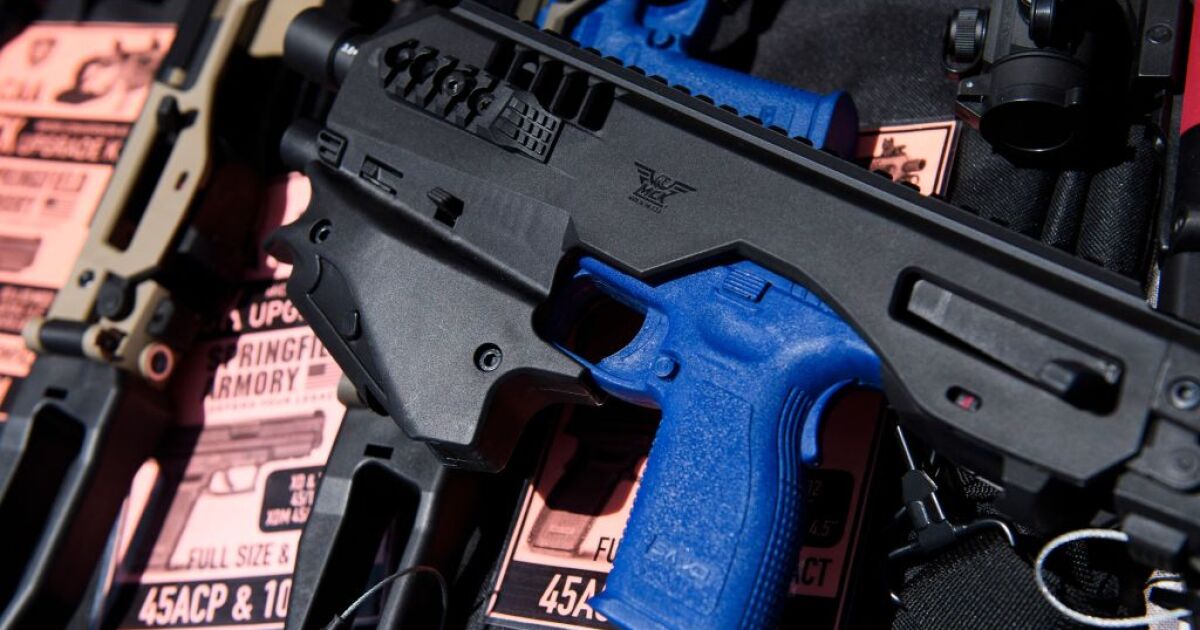 DOJ officials pitched the new rule as a means of cracking down on a loophole in which gun owners can effectively circumvent existing rules on short-barreled rifles with pistol-stabilizing braces, but detractors slammed the measure as an infringement on the Second Amendment.

“The Biden Administration chose to shred the Constitution today. @ATFHQ submitted their pistol brace ‘final rule’ to the Federal Register and demanded Americans either ‘register’ or ‘surrender’ their lawfully owned rifles. Joe Biden is an enemy of our Second Amendment,” the National Rifle Association tweeted.

The Biden Administration chose to shred the Constitution today. @ATFHQ submitted their pistol brace “final rule” to the Federal Register and demanded Americans either “register” or “surrender” their lawfully owned rifles.

Joe Biden is an enemy of our Second Amendment. pic.twitter.com/fY8SsqtqH2

The DOJ and the Bureau of Alcohol, Tobacco, Firearms, and Explosives announced the new rule submission Friday, and it will go into effect after it’s published in the Federal Register.

Stabilizing braces can enhance the length of a pistol and may include straps in order to improve the accuracy of the weapon. Once the measure goes into effect, there will be a 120-day period to register existing pistols with the braces to the government. The new rule is specific to stabilizing braces used “to convert pistols into rifles with a barrel of less than 16 inches.” Failure to comply could result in a 10-year jail sentence and a $10,000 fine.

“This administration continues to find new ways to attack gun owners, and this time their target is brace-equipped firearms that allow persons with disabilities to safely and effectively use pistols. We will continue to work with our industry partners to amplify the disapproving voices in the firearms industry,” Erich Pratt, the senior vice president of Gun Owners of America, said.

An estimated 3 million stabilizing braces are circulating in the United States, according to law enforcement. Rep. Richard Hudson (R-NC), who previously wrote a letter backed by 140 lawmakers opposing regulation on stabilizing braces, fretted the new rule could imperil millions of legal gun owners.

“I will continue to fight against the ATF’s unconstitutional overreach that could turn millions of citizens into felons,” Hudson said in a statement.

The ATF’s new rule on stabilizing braces jeopardizes the #2A rights of law-abiding gun owners and disabled combat veterans.

“I will continue to fight against the ATF’s unconstitutional overreach that could turn millions of citizens into felons.”https://t.co/3FRTcIbXlX

“Biden’s gun-grabber-in-chief, Bureau of Alcohol Tobacco, Firearms and Explosives Director Steven Dettelbach, has finalized an egregious final rule turning millions of common firearms accessories into ‘short barreled rifles.’ This is a completely nonsensical regulation. We are taking a very close look at the rule and evaluating our legal options,” Morrisey said.

Attorney General Merrick Garland previously tapped the ATF to examine the issue back in April 2021 during an event with President Joe Biden about gun violence. The recommendation came in the wake of shootings in Boulder, Colorado, and Dayton, Ohio, in which gunmen used stabilizing braces.

“Almost a century ago, Congress determined that short-barreled rifles must be subject to heightened requirements. Today’s rule makes clear that firearm manufacturers, dealers, and individuals cannot evade these important public safety protections simply by adding accessories to pistols that transform them into short-barreled rifles,” Garland said in a press release.