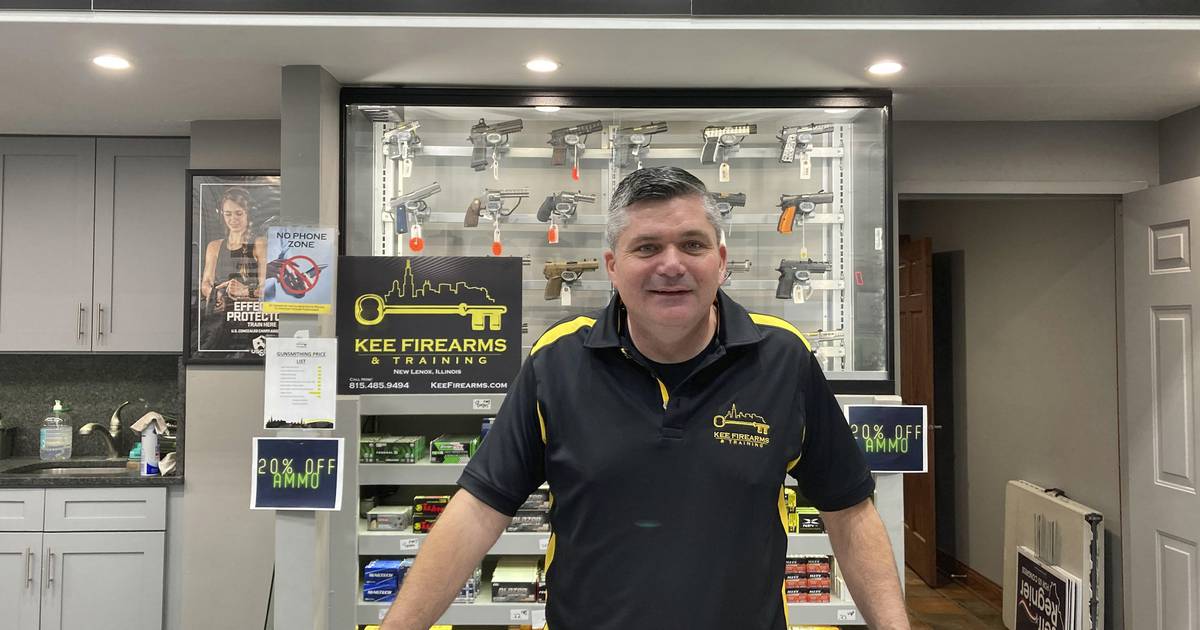 In the hours before Gov. J.B. Pritzker signed a law banning military style firearms Tuesday, Kee Firearms and Training in New Lenox was busy with customers scrambling to buy gun products listed in the bill while they were still legal.

Customers and employees weren’t sure when the law would be signed, though it was clear it would be soon, so there was a sense of urgency to buy the banned items, said Kee Firearms and Training owner Jeff Regnier.

“We were actually busy because people were trying to purchase products before anybody voted or signed the law,” Regnier said. “It was a hurry up and buy anything that was currently legal in Illinois until the governor signed the law.”

But when the store opened Wednesday, Regnier said he stopped the sale of military style firearms and accessories as he waits for clarification on how to move forward with sales of those products.

“When we wake up in the morning, we have a legal business. By the time we go to bed, we have inventory that’s no good to anybody and we can’t sell,” Regnier said.

On Wednesday, Regnier estimated his store had an inventory of 3,700 firearms and 3,000 of them are banned under the new law. Regnier said he’s unsure what to do with the inventory.

Drew Haas, an employee at Rinks Gun & Sport Inc. in Lockport, said Wednesday about hundreds of thousands of dollars worth of inventory is now considered banned.

Three people came to the store Wednesday to pick up rifles they ordered but had to be turned away because the rifles weren’t registered before the law went into effect, Haas said. Employees spent part of the day going through deliveries to see what could be returned and what could be sold under the new law, he said.

“Potentially we will have to sell them online out of state, would be one thing, but I don’t even know how that’s going to work,” Haas said. “The law is unconstitutional. It’s directly repugnant to our country’s founding documents.”

“It’s too early in the game to know … but that’s how you feel,” Regnier said. “I don’t feel it should’ve been done to begin with and it’s unconstitutional, but I don’t think there was any thought process on the ban.”

Dolton police Chief Robert Collins said the department will enforce the law, but he’d like to see legislation that “has more teeth” when it comes to punishing those who use military style guns to commit crimes.

“I would like to see laws that will specifically penalize criminals with guns,” Collins said.

In recent years, Collins said police have seen an increase in use of military style weapons during violent crimes. But, he said, criminals won’t abide by a weapons ban, which means law-abiding gun owners will be affected by the law.

“I have never seen, and probably most of the officers in Dolton haven’t seen, a person who legally owned a weapon of that nature using it for criminal intent,” Collins said.

As of April 10, owners possessing large capacity magazines will be allowed only on private property, at a firing range, a sport shooting competition or at a federal licensed gun dealer for repairs. Violations will be subject to a $1,000 fine.

Devices that increase the firing rates of a firearm, known as “switches,” to turn them into semi-automatic or automatic weapons also are immediately banned and someone in possession would face a felony count for each device.

“My obligation is to make sure our officers follow the law and work within the framework of direction from the courts and legislation passed in Springfield,” Miller said. “We will rely on direction from our legal staff and I suspect this will be a contested matter in the courts for some time.”

Regnier, who ran unsuccessfully last year in the Republican Primary for the 1st Congressional District, said it’s likely the Illinois Rifle Association, the National Rifle Association and other groups will file a lawsuit arguing the law is unconstitutional. But while the new law is in effect, Regnier said he will follow it to make sure he can keep the business open.

Pritzker signed the law at 8 p.m. Tuesday, and Regnier said by 8:30 p.m. he received an email from the Illinois State Police informing him about the new law and that it was effective immediately.

But Regnier said the email did not include a directive on how gun shop businesses should adjust or shift their business under the new law.

“The state hasn’t even given us direction on what we can and cannot do as a licensed dealer. We’ve halted sales of the things that are on the list, because of the spirit of the law, until we can get some clarification,” Regnier said.