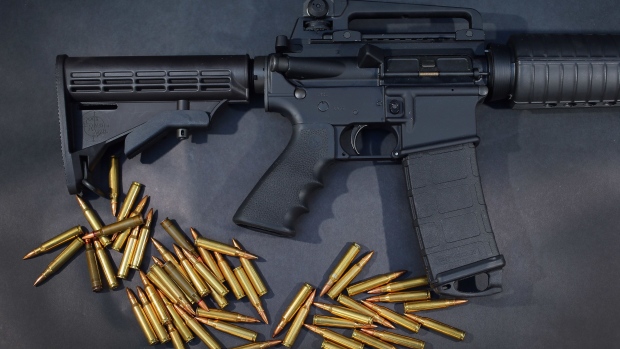 (Bloomberg) — Illinois lawmakers approved a bill that will ban the sale and manufacturing of certain assault weapons in the state.

The state’s Democratic-controlled senate passed the legislation by a margin of 34-20 late Monday after deliberations that started on Sunday, with Governor J.B. Pritzker pushing for the ban at his inauguration speech in the afternoon. It now returns to the House of Representatives, which last week backed a version of the measure, for a final vote.

The bill comes in response to rising violence, including a mass shooting that killed seven in the suburb of Highland Park on the Fourth of July.

“I’m done with the NRA having its way when it comes to mass shootings,” Pritzker, a Democrat, said in his inauguration remarks. “Why do we allow anyone to easily purchase a rapid-fire, high-capacity weapon that can kill dozens of unarmed people in under a minute?”

The passage came following back-and-forth among lawmakers after senate members initially presented what House Speaker Chris Welch said was a “watered-down version” of his chamber’s bill. Pritzker also criticized the proposed changes on Sunday, saying the senate’s version fell short of what was needed.

After long deliberations, lawmakers reached a deal that includes an immediate ban on manufacturing, selling, importing or purchasing a range of assault weapons. The legislation also bans attachments that increase the rate of fire of semi-automatic weapons.

“After continued negotiations between the leaders, stakeholders and advocates, we have reached a deal on one of the strongest assault weapons bans in the country,” senate President Don Harmon said in a statement. “Gun violence is an epidemic that is plaguing every corner of this state and the people of Illinois are demanding substantive action.”