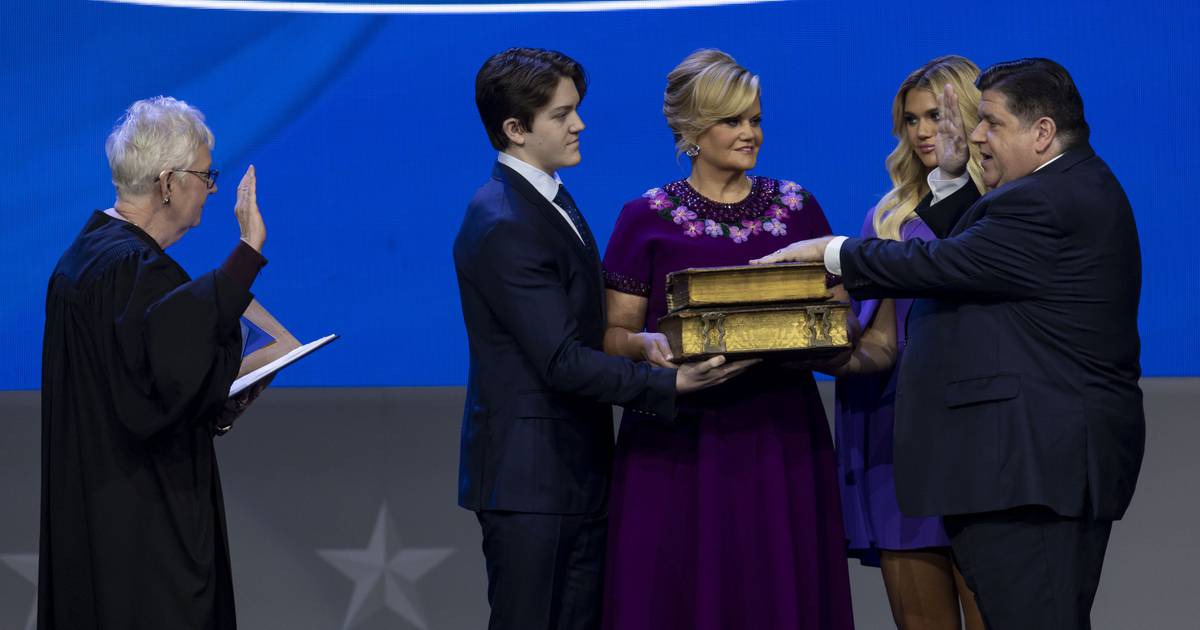 SPRINGFIELD — Seeking to build on the successes of his four years in office, Democratic Gov. J.B. Pritzker offered a second-term agenda Monday that called for a state constitutional right to abortion, making preschool available to every family and making public college free for children in working-class families.

The 57-year-old governor also vowed that Democratic lawmakers will send to his desk comprehensive legislation to ban military-style firearms and to require such guns already in circulation to be registered. The governor and legislators reached a deal on a measure that was passed by the Senate later Monday, with a final vote in the House expected Tuesday.

In a pomp-filled ceremony at the Bank of Springfield convention center, Pritzker stood with his family on a massive stage flanked by white columns as he took the oath of governor for a second time shortly after noon from Illinois Supreme Court Chief Justice Mary Jane Theis.

The inauguration events culminated with a performance by pop superstar Bruno Mars at a gala at the state fairgrounds.

It was the culmination of a lengthy reelection campaign that saw the billionaire heir of the Hyatt Hotels fortune spend more than $150 million in defeating his Republican challenger, Darren Bailey, a conservative downstate farmer who had been Pritzker’s preferred GOP opponent, by nearly 13 percentage points in November.

Reflecting the one-party dominance of the state, a full slate of Democrats were also inaugurated to four-year terms Monday: Lt. Gov. Juliana Stratton, Attorney General Kwame Raoul, Comptroller Susana Mendoza and Treasurer Mike Frerichs, who all were reelected. Alexi Giannoulias was sworn in as Illinois secretary of state, replacing Jesse White, who held the office for 24 years and did not seek another term.

Pritzker was sworn in shortly after signing into law pay raises for the statewide officers and his agency directors, as well as the state’s 177 legislators beginning with the new term that starts Wednesday. Democratic lawmakers approved the raises with no Republican support.

Opening his address, Pritzker jokingly took note of the election and Republican campaign yard signs that said “Fire Pritzker.” He said his concern lessened when “my kids pointed out that when people in their generation think something is really cool they say, ‘That’s Fire!’ “So, I want to take this moment to thank everyone who put up those very encouraging signs,” he said to laughter.

Pritzker recounted the optimism of his first inaugural speech, which reflected a contrast to the four years of governmental and financial chaos under his vanquished predecessor, one-term Republican Bruce Rauner.

He noted how he achieved most of what he proposed in 2019, including restoring the state’s fiscal footing, increasing the minimum wage to $15-an-hour by 2025, legalizing and taxing recreational marijuana, prioritizing broadband access to rural downstate areas and putting the state on a path to 100% clean energy by 2050.

Pritzker’s speech four years ago also introduced a phrase that, unbeknown to everyone at the time — including the governor himself — that would soon become a central theme of his administration’s first term: “I believe in science.”

Though he was speaking then of efforts to curb climate change, little more than 14 months later Pritzker’s expressions of belief in and following “science” defined his emergency responses to the COVID-19 pandemic — including mitigation efforts that shuttered businesses, closed schools to in-class learning and kept nonessential workers from going to the workplace.

“We did all those things while fighting to survive a historic crisis — one that has left a deep imprint on every one of us,” Pritzker said of the pandemic, which dominated his first term. “The difficult thing about governing through unprecedented times is that it’s your job to set the precedent.”

“As governor it’s your job to plan for the future, even as you continue to grapple with the past,” he said. “So today, as Illinois continues its progress overcoming our historical fiscal challenges and a deadly pandemic, I come to you with an agenda as ambitious and bold as our people are, thinking not only about the next four years, but about the next 40.”

Pritzker campaigned for reelection on his longtime support for a woman’s right to obtain an abortion, which became a politically charged issue in late June when the U.S. Supreme Court overturned federal recognition of the procedure and returned the matter of its legality to the states.

Illinois has already enshrined a right to an abortion in state law and is considering legislation to help physicians and women from other states undergo the procedure in Illinois. But until Monday, Pritzker had not responded to questions about whether the state should add a right to abortion to its constitution, a process requiring a public vote.

“One thing last year proved is that if given the chance, a bunch of right-wing judges and legislators will take away women’s rights. Well, Illinois spoke loudly and decisively in 2022 and declared that in the Land of Lincoln, we trust women,” he said, referring to his solid reelection victory.

“The right to privacy and bodily autonomy demand that we establish a constitutional protection for reproductive rights in Illinois,” he said. “The extremists still want to take away a woman’s right to choose and I don’t intend to let them. That’s why yet again, on women’s rights, Illinois will lead.”

In a lame-duck session scheduled to end Tuesday, House and Senate Democrats were attempting to reconcile differences over measures to protect patients and providers from being subjected to restrictive laws in other states, as well providing similar protections involving gender-affirming care for transgender people. The legislation also would expand the pool of health professionals for abortion.

Democrats in each chamber also appeared on the brink of fulfilling Pritzker’s vow for a ban on military-style guns, limits on ammunition magazine capacity, and provisions for current owners of those firearms to provide serial numbers to register them.

Pritzker, Senate President Don Harmon of Oak Park and House Speaker Emanuel “Chris” Welch of Hillside reached an agreement on the plan that was approved by the Senate on Monday evening on a 34-20 vote, with no Republicans in support.

A final House vote to approve the measure is expected Tuesday, with Pritzker, Harmon and Welch saying they had “reached a deal on one of the strongest assault weapons bans in the country.”

In his inauguration speech, Pritzker had said he was “tired of living in a world where a mass shooting needs a title so you know which one we’re referring to.”

“Now, I’m a firm believer that government functions best when we look for compromise,” Pritzker said. “But I’m done with the NRA having its way when it comes to mass shootings. Why do we allow anyone to easily purchase a rapid-fire, high-capacity weapon that can kill dozens of unarmed people in under a minute?”

In addition to guns and abortion, another first-term initiative for Pritzker remains unresolved — the elimination of cash bail, which was a provision in a sweeping criminal justice bill he signed in early 2021.

A lawsuit by more than 60 states attorney’s from across Illinois led a county judge to declare the provision in violation of the state constitution, and the Illinois Supreme Court subsequently put a stay on cashless bail taking effect as scheduled on Jan. 1, and has set hearings on the issue.

Pritzker has long been an advocate of early childhood education and he used his address to “propose we go all in for our children and make preschool available to every family throughout the state.”

An aide said later that Pritzker is considering an expanded program for state subsidized preschool based on income. There were no details on the program or its costs, which may surface in Pritzker’s upcoming budget proposal, the aide said.

Additionally, no details or cost estimates were available on Pritzker’s call for making college tuition free “for every working family.” Pritzker has increased funding for need-based grants to students from lower income families.

Prior to the speech, in one of the final acts of his first term, Pritzker signed into law a budget measure boosting the salaries of lawmakers, starting with those sworn in for a new term Wednesday, while also raising pay for the governor and other statewide officials and the heads of agencies appointed by the governor.

Pritzker, who pushed for raises for his agency heads, over the weekend defended the move as necessary to attract “great people” to positions in his administration.

Pritzker said the optimism he felt at his first inauguration “was born of a truth lodged firmly in my heart, that Illinois has always stood at the intersection of American ambition and human resilience.”

“That combination,” he said, “is what has made this the greatest state in the union.”