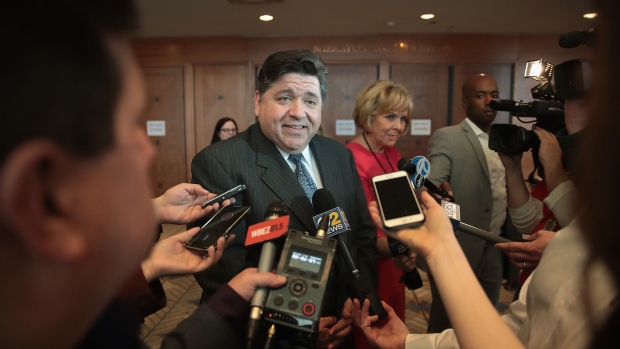 The heir to the Hyatt hotels fortune wants to pass a ban on certain assault weapons, a bill being weighed in the Illinois Senate this week. He is also seeking to make preschool available to everyone in the state and ensure free higher-education tuition for working class families.

The agenda outlined in his inauguration speech comes as the worst-rated US state confronts crime, population loss and economic inequality exacerbated by the pandemic.

“As Illinois continues its progress overcoming our historical fiscal challenges and a deadly global pandemic, I come to you with an agenda as ambitious and bold as our people are, thinking not only about the next four years, but about the next forty,” he said.

During his first term, Pritzker, 57, faced mounting criticism from billionaire Ken Griffin, who moved the headquarters of his Citadel hedge fund to Florida last year. Griffin, once the richest man in Illinois, decried rising crime and mismanagement of the state’s finances. The state also has lost several headquarters including those of Boeing Co. and Caterpillar Inc.

Still, Pritzker passed budgets on time — a norm for most states, but one which eluded Illinois between 2015 through 2017 under his predecessor. The state also earned multiple credit rating upgrades during his first term, which pulled it back from the brink of junk.

Pritzker is calling for “real accounting” of the assault weapons currently in circulation, and on Sunday criticized the version of the bill presented by the Senate as falling short of what’s needed in the state and agreed on by the House of Representatives last week.

“I’m a firm believer that government functions best when we look for compromise,” Pritzker said in his prepared remarks. “But I’m done with the NRA having its way when it comes to mass shootings. Why do we allow anyone to easily purchase a rapid-fire, high-capacity weapon that can kill dozens of unarmed people in under a minute?”

The governor, who has so far deflected speculation that he may have presidential ambitions, said Illinois would get the ban in place and “then the federal government should follow our lead.”

Under Pritzker, Illinois cemented its position as an island in the Midwest for many causes backed by Democrats including abortion access, workers’ rights and criminal justice reform.

“The extremists still want to take away a woman’s right to choose, and I don’t intend to let them,” he said. “That’s why yet again, on women’s rights, Illinois will lead.”