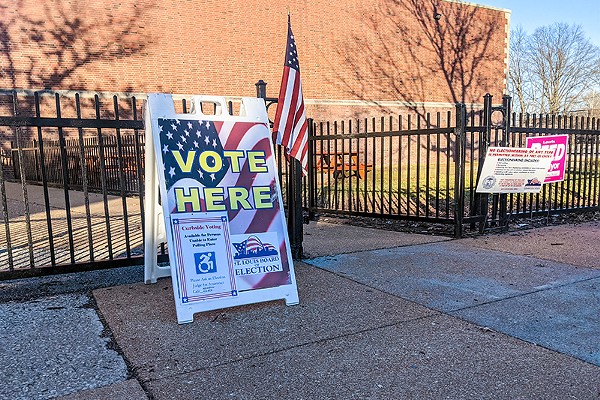 The Missouri GOP is trying to make passing statewide initiatives by simple majority a thing of the past.

For some reason, this feels like a cause that could only emerge from the scattered remnants of the Missouri Republican Party.

One of the top GOP priorities for the new year will be finally getting an item on the statewide ballot to make it harder for future voters to act in their own interests by statewide ballot. Every sentence about this nonsense comes to you courtesy of the Department of Redundancy Department.

As the Springfield News Leader reported, “nearly a dozen proposals pre-filed (in December) would ask voters to increase the requirements for ballot initiatives that change the state’s constitution or laws. Missouri’s current initiative petition process allows proposals that make it to the ballot to be approved with a simple majority of votes cast.”

This attack on small-D democratic principles — but truly on the large-D Democratic Party — has emerged as a noxious priority of the Republicans this year. Previously it was just a noxious idea going nowhere.

This time, however, it looks to be headed for the ballot. With ridiculous super-majorities in both chambers of the General Assembly, Republicans possess enormous power that can only be checked by voters at the ballot.

Based on the sheer number of pre-filed bills, it seems likely that Republicans are in a hurry to make it much harder for the voters to impose their will on the people. That urgency appears spurred by the ultimate wedge issue: Abortion.

Republican politicians can expect voters to take at least some steps through ballot initiatives to counteract Missouri’s heartless assault on reproductive rights. They are well aware that a substantial majority of Missourians — across lines of party and gender — have a big problem with things as they are in a post-Roe v. Wade world.

Virtually all abortions are banned in Missouri. The state now requires women who are victims of rape or incest to bear their attackers’ child. It’s one of the most repressive states in the nation for women’s rights.

But by no means is abortion the only issue driving legislators to want to make it harder for voters to rein them in. All manner of special interests — which somehow have a special place in politicians’ hearts — have lots to lose and little to gain when voters have strong access to the statewide ballot process.

Call it the “We’ve Already Got Ours” lobby. From the perspective of the National Rifle Association, Big Tobacco, Big Pharma or the aforementioned anti-abortion movement — and, yes, now Big Marijuana — almost all the ideas that can be advanced by ballot initiative are bad.

It’s much easier to purchase the loyalty of politicians than to fend off the momentum of statewide movements. This is true across the political spectrum, by the way.

If the Republican politicians have their way, the large majority of ideas that Missouri voters want to advance will be thwarted by not having large enough majorities of their own. Common sense would dictate that not even Republican voters would want to do that to themselves.

But the x-factor is whether the politicians will have so many resources at their disposal — and the voters won’t — that they’ll be able to distort the issue, fool the electorate or do whatever it takes to block future voters’ power at the ballot. It seems they’ll be unlikely to succeed, but that isn’t certain.

For evidence of how crass the anti-democratic forces are, look no further than this for the News-Leader piece:

“A few of the proposals aim to tip the scales of voting to require outsized support throughout rural Missouri, which overwhelmingly leans Republican. One resolution from Rep. John Black of Marshfield requires a constitutional amendment to receive a majority of the votes cast in half of Missouri’s 34 state Senate districts (24 are represented by Republicans). Another from [Rep. Ed] Lewis [of Moberly] would do the same but for a majority of House districts (Republicans represent 111 of the 163 seats).

“Other proposals focus on the signature-gathering process, aiming to make it more difficult to land a measure on the ballot in the first place. Currently, voters and groups hoping to place a measure on the ballot must gather signatures from six of Missouri’s eight congressional districts: 5 percent of residents per district for state law changes and 8 percent per district for constitutional amendments.

Those proposals drop the curtain on how partisan and power-hungry these people are. It’s just math: They want the gerrymandered advantage they have in the number of counties to outweigh the apparently outdated notion that majority rules in a democracy.

One of the heroes of the opposition is Rep. Joe Adams, D-University City. Adams, the former mayor of University City who is serving the last of his four terms in the House, has carved a niche as the legislator who has perennially annoyed the Republican idiots by offering amendments to their bills which would require that they only became laws if they met the requirements they advocated for the future.

Adams also is introducing a bill this session — HJR 13 — that would block the General Assembly from overturning an initiative petition. With Republicans in charge, it’s unlikely to see the light of day. But what a good idea for the voters to advance at the ballot box and make part of the state constitution. By simple majority.

Ray Hartmann founded the
Riverfront Times in 1977. Contact him at [email protected] or catch him on Donnybrook at 7 p.m. on Thursdays on the Nine Network.