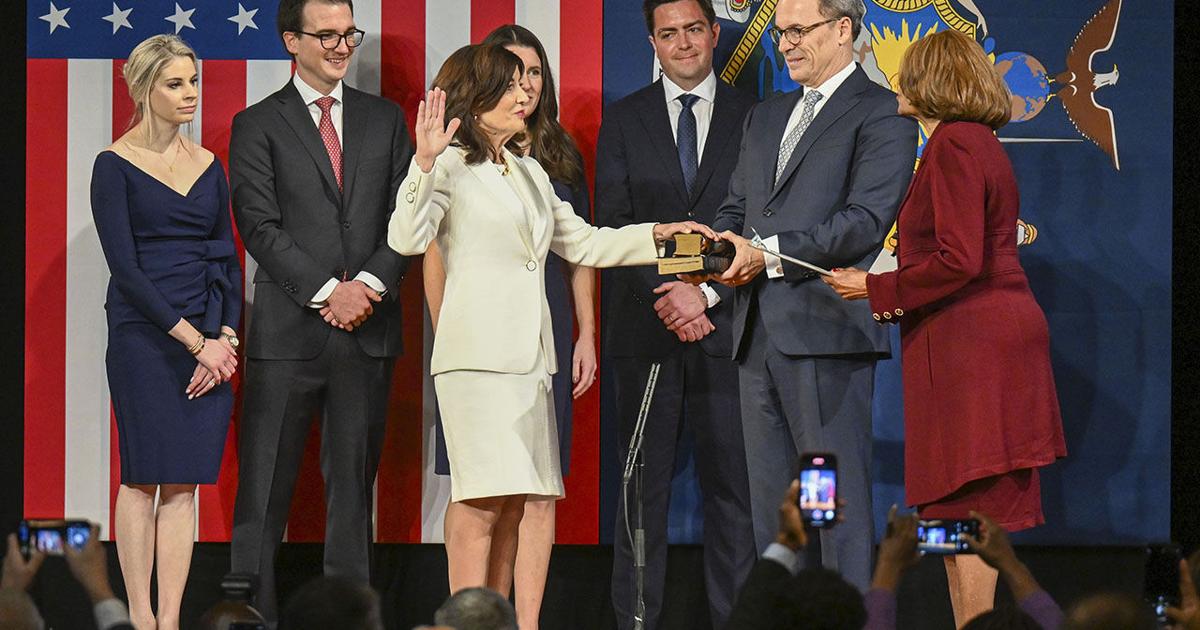 ALBANY – Gov. Kathy Hochul was sworn into a full term of office on Sunday, becoming the first woman in New York history to achieve that feat.

Hochul, who won election to a four-year term in November, began her remarks by reading out the names of New York women who had blazed her path, from Harriet Tubman to Shirley Chisholm to Hillary Clinton. Hochul noted that the fight for women’s suffrage began in New York, and that her election could similarly be an inspiration for young women.

At the same time, Hochul emphasized that her bid for the office had not been primarily motivated by achieving the historic first.

While stating that she would save policy ideas for her Jan. 10 State of the State speech, Hochul did broadly outline some priorities: Fighting an “affordability crisis” in housing and energy, gun violence, a rise in hate crimes and the lingering effects of the Covid-19 pandemic. She pledged to fight crime and protect the environment.

The ceremony also emphasized Hochul’s personal biography: A father who did clerical work at night at the Bethlehem Steel plant and attended school during the day, a mother who fought for “social and racial justice and taught her daughter to go into the world and do well, but also to do good.” That daughter worked her way up the political ladder in Western New York: Hamburg Town Board, Erie County Clerk, and in 2011, an upset win to become a member of the U.S. Congress.

Hochul was elected as New York’s lieutenant governor in 2014, running on the Democratic ticket along with former Gov. Andrew Cuomo. In 2021, Cuomo confronted a spate of sexual harassment allegations, and facing likely impeachment, resigned in August of that year.

Hochul still faced a Democratic primary against Long Island U.S. Rep. Tom Suozzi and New York City Public Advocate Jumaane Williams, but easily prevailed in June. She faced a tougher test in November against the Republican nominee for governor, U.S. Rep. Lee Zeldin, who hammered Hochul on the issue of crime. Hochul ended up winning the closest general election for governor in decades.

Also sworn in on Sunday were several fellow Democrats: Lt. Gov Antonio Delgado, who won his first term in November running alongside Hochul; James, who was first elected in 2018; and Comptroller Tom DiNapoli, who has served in the office since 2007, and has since been elected to the office four times.

James was sworn in by U.S. Senate Majority Leader Chuck Schumer of New York, who praised her for taking on former President Donald Trump and the National Rifle Association. Schumer said she was “blazing a trail for progressive prosecutors across the nation.”

One person not mentioned by James or anyone else was Cuomo, who resigned from office following a scathing report issued by James detailing alleged sexual harassment. In her remarks, James never mentioned the issue.

James recently confronted her office’s own sexual harassment controversy involving her longtime chief of staff, Ibrahim Khan, in early December. One of the women who leveled allegations against Khan alleged that James had sought to quietly bury the matter.

Speaking about her priorities over the next four years, James emphasized areas where new technology was posing threats: She said she would protect young people “from the dangers and harms posed by Big Tech,” regulate the cryptocurrency industry, stop companies that try to “evade our common sense gun laws by selling ghost guns,” and regulate social media “shining the spotlight on the corners of the internet to root out the hatred and violence that is eroding the very foundation of our society.”

The smart way to start your day. We sift through all the news to give you a concise, informative look at the top headlines and must-read stories every weekday.