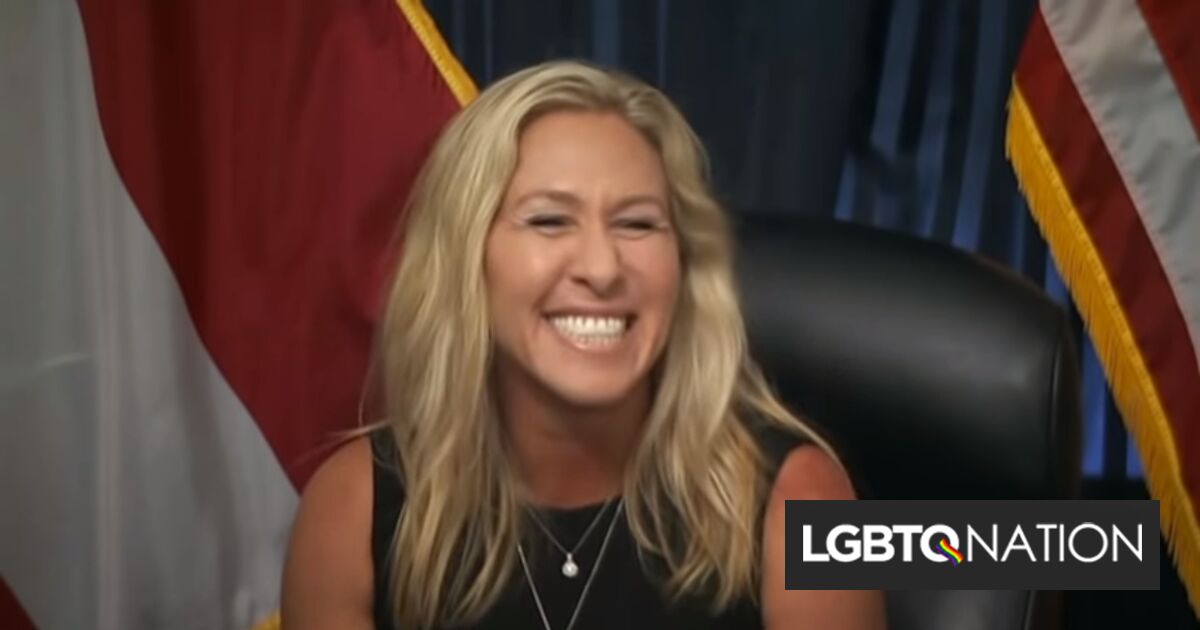 Far-right Rep. Marjorie Taylor Greene (R-Ga.) has defended out gay Rep.-elect George Santos (R-NY) from calls for his resignation after he admitted fabricating large parts of his resume.

Santos was criticized by conservative former congressmember Tulsi Gabbard during her interview with him on Fox News’ Tuesday night episode of Tucker Carlson Tonight. Gabbard was filling in for the show’s titular host.

“Now that the election is over, and I’m finding out all of these lies that you’ve told — not just one little lie or one little embellishment, these are blatant lies,” Gabbard told Santos. “My question is, do you have no shame? Do you have no shame in the people who now you’re asking to trust you to go and be their voice for them, their families, and their kids in Washington?”

Santos deflected by claiming that Democratic President Joe Biden lies to the American public. However, Gabbard redirected the conversation back to Santos, saying, “It’s hard to imagine how they could possibly trust your explanations when you’re not really even willing to admit the depth of your deception to them.”

Santos said that he would be willing to explain how the financial work experience on his resume wasn’t a complete fabrication, but, he said he worried the discussion would “go way above the American people’s head.” Gabbard said his comment insulted the intelligence of the American people.

Among the disinformation in her defense of Santos, she falsely claimed that Rep. Ilhan Omar (D-Minn.) married her brother; that George Floyd, a man murdered by police, actually died of a drug overdose; that transgender assistant secretary for health Dr. Rachel Levine isn’t a woman; that Rep. Eric Swalwell (D-Calif.) had sex with a Chinese spy; that COVID vaccines don’t safely prevent the disease; and that former President Donald Trump (R) didn’t incite the January 6, 2021 Capitol riots.

“The left doesn’t care about lying,” Greene wrote. “The real reason they’re attacking George Santos is that he the first openly gay Republican elected and they hate him for it. I’m glad George is being honest with his district now and look forward to seeing how George legislates & votes.”

George Santos lied about his resume, and the left is demanding he resign.

Ilhan Omar says she didn’t marry her brother, she lied.
Elizabeth Warren said she was Native American Indian, she lied.
The left said George Floyd didn’t die of a drug overdose, they lied.

Her defense of Santos and pushing of disinformation is hardly surprising considering her past embrace of conspiracy theories. She has previously said that an airplane never hit the Pentagon during the September 11 terrorist attacks, claimed that all school shootings are fake, said that California wildfires were started by a Jewish-owned space laser, and accused former Secretary of State Hillary Clinton of slicing off a child’s face and wearing it.

In a second Twitter thread, she blasted Gabbard for giving Santos “zero grace, while George is admitting and apologizing for lying about his resume.”

“Tulsi says that George’s actions on the House floor are what is most important, but George has not even had the chance to take action for his district on the House floor because he isn’t even sworn in yet,” Greene added before pointing out that Gabbard was praised by the reproductive health organization Planned Parenthood and denounced by the gun manufacturers’ lobby the National Rifle Association. (To Greene, this is a bad thing.)

“I do appreciate that Tulsi says words that sound conservative now even though she can’t take action to back them up,” Greene wrote. “I am glad she, like George, realized she made mistakes and was wrong every time she voted to support killing the unborn, taking away our gun rights, and legislated to kill America’s energy independence and the fossil fuel industry.”

“We Republicans should give George Santos a chance and see how he legislates and votes, not treat him the same as the left is,” Greene wrote.

when he is standing on the House floor fighting for them.

I too believe actions and words are extremely important, but I don’t think a former Democrat who’s actions on the House floor as recent as 2020 that gave her an A from Planned Parenthood, an F from the NRA, and

Santos admitted that he lied about graduating from Baruch College, working directly for Citigroup and Goldman Sachs, and living at a fake address in his congressional district. He has also provided no proof to back up claims that he founded a charity called Friends of Pets, lost four employees in the June 2016 Pulse nightclub shooting, that his grandparents escaped the Holocaust, and that his mother was in the World Trade Center during the September 11, 2001 terrorist attacks.