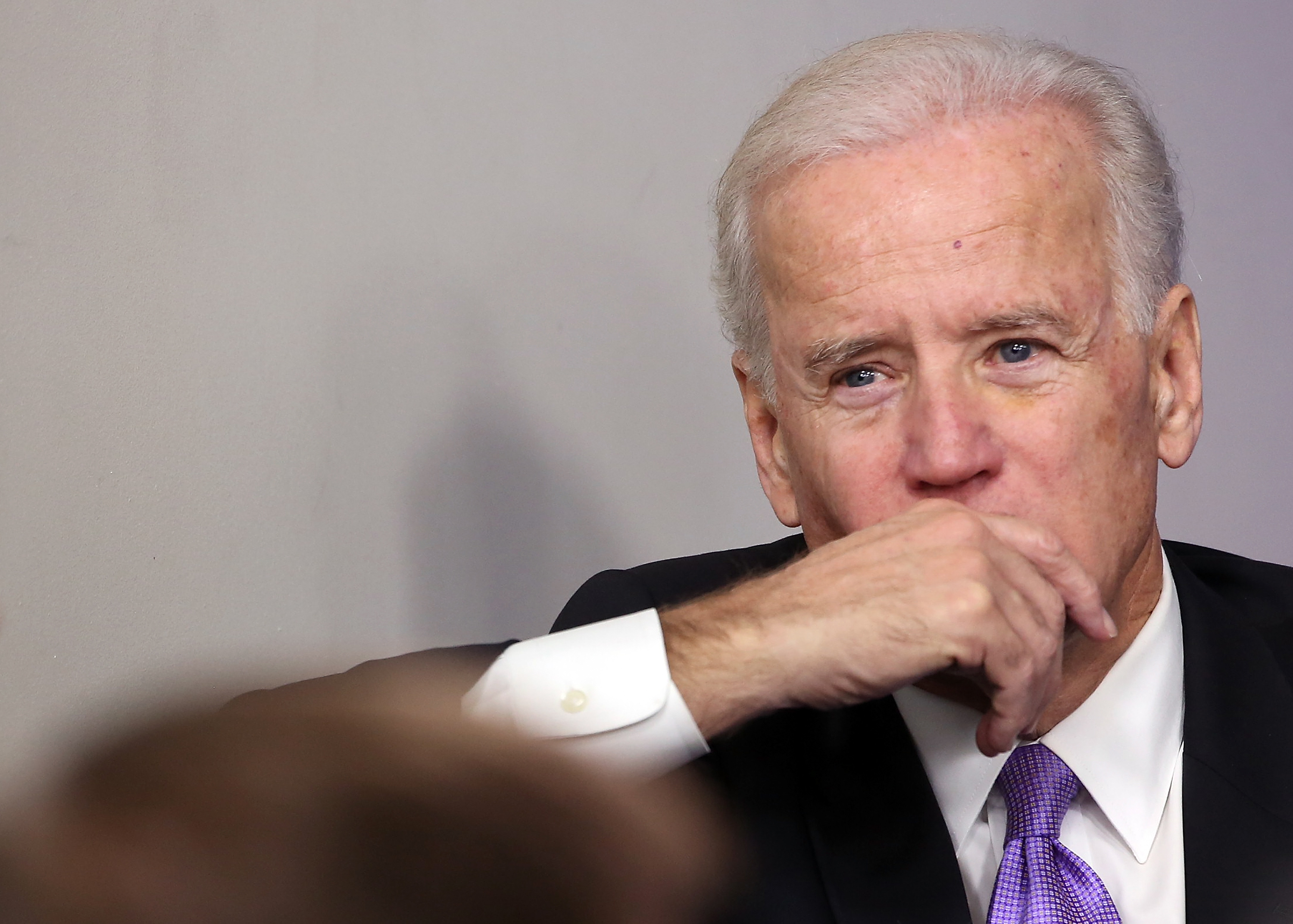 People who witnessed meetings after the shooting at Sandy Hook Elementary likened then-Vice President Joe Biden to a grief counselor, listening to each parent talk about their child as tears streamed down their cheeks. | Win McNamee/Getty Images

In the early days after Mark Barden’s first grade son Daniel was gunned down at Sandy Hook Elementary School, his family hunkered down in their home, drowning in grief.

Relatives filled their house, offering comfort and trying to protect the Bardens from the media that swarmed Newtown, Conn., to cover the grisly aftermath of a gunman killing 19 other first-graders and six adults. Barden was still trying to grasp the unthinkable loss of his 7-year-old when his landline rang. It was Vice President Joe Biden.

Barden carried the phone down to his music studio. The two men spoke for more than an hour, Barden recalled. They talked about the deaths of their children.

This week, Barden braces himself for yet another Dec. 14 anniversary — now a decade without his son. He will, once more, think about the advice Biden gave him at the time: Keep a notebook on his bedside table and, each night, grab a pen and rate the day on a scale of one to 10.

“He said, ‘You won’t believe me now, but there will come a day when you’ll think about Daniel and a smile will come to your face before a tear comes to your eyes.’ I think about that a lot.”

The shooting at Sandy Hook was an unparalleled tragedy. President Barack Obama called it the darkest day of his presidency. Biden has said much the same.

But the weeks following the tragedy also were a challenge for Biden, both political and humanitarian in nature.

The then-vice president held dozens of calls with the victims’ family members. Obama would also tap him to lead the administration’s push on gun policy post-Sandy Hook. Biden and his staff were consumed by the work for months, motivated to turn a period of darkness into something tangible, people close to Biden at the time told POLITICO.

Their monthslong push ended in defeat, when Biden saw a bill to expand background checks die on the Senate floor. The vice president was devastated, former staff and people close to Biden said, and his inability to deliver for Sandy Hook families still weighs heavily on him 10 years later — playing an outsized role in fueling his continued push on curbing gun violence.

“He identifies with what these families are going through. There’s something in his gut that forces him to make this a front-burner issue,” said Sen. Chris Murphy (D-Conn.), referencing the deaths of Biden’s infant daughter and first wife 50 years ago this month. “He’s viscerally connected to this issue of banning assault weapons, and I think that comes from this sort of place in his heart where he connects with the loss of the families in Uvalde and Sandy Hook and feels like he has a moral obligation.”

It was just days after the Newtown shooting, that Obama asked Biden and his team to deliver concrete proposals on gun policy. He wanted them by January. And Biden’s task force met 22 times over the subsequent weeks.

They spoke with the Sandy Hook families, gun violence survivors, business and faith leaders, and the National Rifle Association. One former aide in the vice president’s office, who asked to remain anonymous because of media restrictions in his current job, said some meetings were so gut wrenching, staff would gather in their offices afterward crying. People who witnessed those meetings likened Biden to a grief counselor, listening to each parent talk about their child as tears streamed down their cheeks.

Five weeks after the shooting, Obama and Biden announced 23 executive actions on guns. They also called on Congress to pass universal background checks, a new assault weapons ban, and a prohibition on high-capacity gun clips. Biden followed with a fiery plea that February to strengthen the nation’s gun laws, a speech he delivered in Danbury, Conn., 12 miles from Sandy Hook.

He spent hours with the Sandy Hook families after those remarks, taking his time with each person individually, Murphy said. Biden was already two hours late for his plane back to Washington when he moved to another conference room at Western Connecticut State University to meet with parents who lost their children to gun homicides in Bridgeport, New Haven and Hartford.

Those parents had earlier expressed anger to Murphy that their grief at the hands of gun violence never got the attention that Sandy Hook had. Biden sat for hours with those parents, too.

That spring, the White House schedule was filled with events on gun violence and meetings with lawmakers for both Obama and Biden. But all the time counseling and strategizing and meeting with stakeholders to craft the right legislative language had a damaging side effect. The momentum to act on guns — so acute in the days after the tragedy — began to fade away.

On April 17, 2013, the Obama White House watched the bill to expand background checks fail to beat back the Senate filibuster. Earlier, amendments to introduce the assault weapons ban and the ban on high capacity magazines had failed, too.

“I will never forget the image of the president and vice president standing on the Rose Garden steps with maybe six or seven representatives of the Sandy Hook families, right after the Manchin-Toomey vote failed,” a current White House official said. “It is impossible to explain to someone who just lost their mother or just lost their child why Congress couldn’t do anything.”

Biden called Barden again in 2015, on his way to Obama’s State of the Union address, nearly two years after the legislation failed. He told him how sorry he was that the administration hadn’t been able to do anything after Daniel’s death.

“It just breaks my heart that we can’t,” Biden told him.

Now president, Biden still carries “a tremendous amount of guilt — it’s the kind of guilt that your therapist tells you is not your fault,” the former Biden aide said. “It’s very painful to have not been able to follow through on that promise … I think it lives in him that this is unfinished business.”

Almost 10 years after Sandy Hook, a gunman killed 19 students and two teachers at an elementary school in Uvalde, Texas. There was deliberation inside the White House about whether the president should address the nation that night, Murphy said. Biden pushed for the speech. The president poured over the script, calling the Connecticut senator to make sure he had the right words.

“I had hoped, when I became president, I would not have to do this again,” Biden said in that May 24 address. “Why are we willing to live with this carnage? Why do we keep letting this happen? Where in God’s name is our backbone to have the courage to deal with it and stand up to the lobbies?”

A month after the Uvalde shooting, Biden signed the first major gun legislation passed by Congress in nearly 30 years. It did not go as far as the bill he put together 10 years ago. But it was celebrated by gun violence advocates nonetheless, and all 26 Sandy Hook families were invited to the Rose Garden for the bill signing.

It’s “still not enough,” Biden told the crowd last week at the National Vigil for All Victims of Gun Violence, where he was the first president to speak at the annual event. He then bowed his head and joined the packed church in a moment of silence.