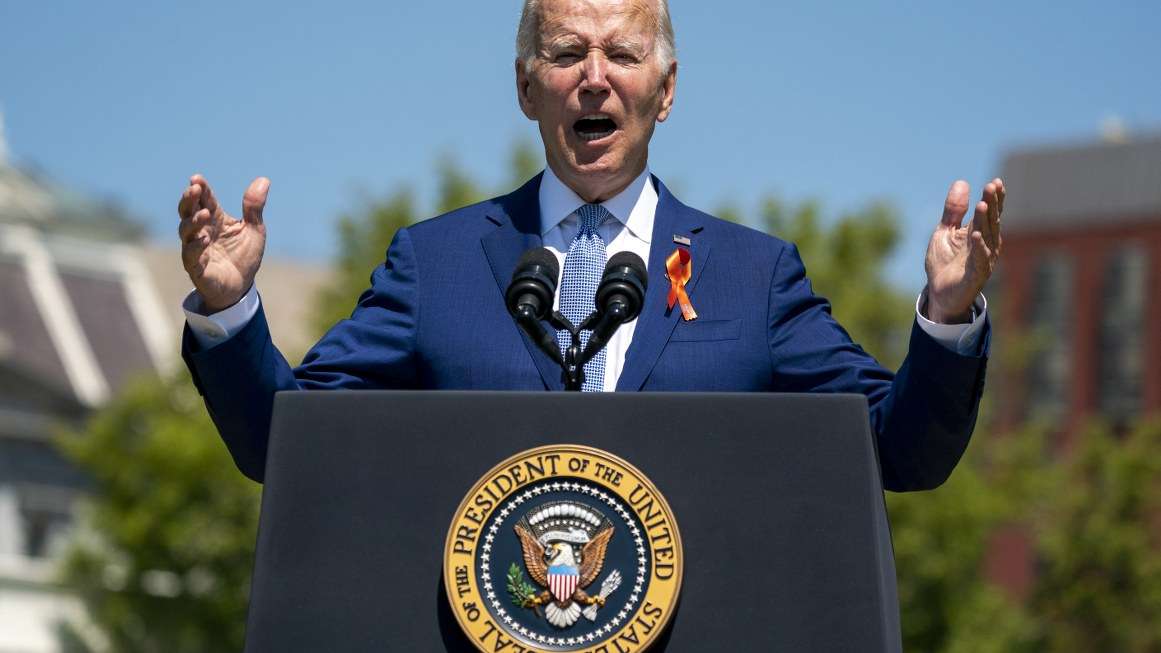 There’s always a question as to whether President Joe Biden really means what he says or if he even understands the words coming from his mouth. That conceded, it’s wise to take seriously the threats of powerful people who have the means to at least attempt to impose their will on others.

And that brings us to the president’s recent vow to ban semiautomatic firearms, a vast category covering some of the country’s most popular guns. It’s a bold goal, not only in its scope, but also because it’s probably unconstitutional and bound to alienate millions of Americans.

“The idea we still allow semiautomatic weapons to be purchased is sick. It’s just sick,” President Biden insisted on November 24 after a photo-op with firefighters in Nantucket, Mass. “It has no, no social redeeming value. Zero. None. Not a single, solitary rationale for it except profit for the gun manufacturers.”

Maybe Biden just meant military-looking semiautomatic rifles since, when asked how he planned to accomplish his agenda during the lame-duck session of Congress after his party lost the House, he answered: “I’m going to try to get rid of assault weapons.” But “assault weapon” is an arbitrary term defined by mostly cosmetic characteristics. Bans on such guns are easily evaded, and produce little or no reduction in the crimes that supposedly motivate restrictions. Besides, the president mentioned “assault weapons” only as a step to addressing the availability of “semiautomatic weapons.”

Lots of Americans disagree with Biden’s broad claim that semiautomatic firearms, which fire one shot with each squeeze of the trigger and chamber a new round without need for the user take extra action, have “no social redeeming value.” They purchase semiautomatic pistols, rifles, and shotguns for self-defense, hunting, and target-shooting. And they purchase them in vast numbers.

The motivation for gun-ownership has also shifted in recent decades, reinforcing demand for the firearms the president disdains.

“Guns began as tools of necessity in the colonies and on the frontier, but evolved into equipment for sport hunting and shooting, as well as desired commodities for collecting,” Wake Forest University sociologist David Yamane wrote in a 2017 paper. “Although recreation remains an important segment, the central emphasis of U.S. gun culture has gradually shifted to armed self-defense over the course of the past half-century.”

We’ve seen that shifting emphasis in eased concealed-carry laws around the country, including reciprocal recognition by states of each other’s carry permits, and the adoption of permit-less carry so that people can exercise their rights without asking permission. Semiautomatic pistols of various calibers and capacities are much preferred over revolvers, the main alternative handgun type, for self-defense with the market responding to consumer tastes.

According to the Bureau of Alcohol, Tobacco, Firearms, and Explosives (which doesn’t distinguish between different types of rifles and shotguns in its reports, but does break out semiautomatic pistols from revolvers), of the 3.6 million handguns manufactured in the United States in 2019 (the most recent year for which data is available), about 84 percent were semiautomatic. Those pistols certainly increase the share of civilian-owned firearms represented by semiautomatics. And banning those pistols would face significant constitutional challenges.

“The Second Amendment protects an individual right to possess a firearm unconnected with service in a militia, and to use that arm for traditionally lawful purposes, such as self-defense within the home,” the U.S. Supreme Court held in District of Columbia v. Heller (2008). “The District’s total ban on handgun possession in the home amounts to a prohibition on an entire class of ‘arms’ that Americans overwhelmingly choose for the lawful purpose of self-defense. Under any of the standards of scrutiny the Court has applied to enumerated constitutional rights, this prohibition—in the place where the importance of the lawful defense of self, family, and property is most acute—would fail constitutional muster.”

Could Americans use revolvers instead of semiautomatics for self-defense? Sure. But they “overwhelmingly choose” pistols when given the option.

The Supreme Court has yet to weigh-in on semiautomatic rifles, scary-looking “assault weapon” of the AR-15 variety (termed “modern sporting rifles” by the industry) or otherwise. But “approximately half of all rifles produced in 2017 were modern sporting rifles,” the National Shooting Sports Foundation noted in 2019. It’s impossible to argue that Americans don’t “overwhelmingly choose” such weapons, too.

“Good for both home and battle, the AR-15 is the kind of versatile gun that lies at the intersection of the kinds of firearms protected under District of Columbia v. Heller,” U.S. District Judge Roger T. Benitez wrote last year in an early decision for a still-pending challenge to California’s gun restrictions. The final decision will need to reflect this year’s U.S. Supreme Court guidance in Bruen that “when the Second Amendment’s plain text covers an individual’s conduct, the Constitution presumptively protects that conduct, and to justify a firearm regulation the government must demonstrate that the regulation is consistent with the Nation’s historical tradition of firearm regulation.”

So, President Biden’s bold goal of making “semiautomatic weapons” unavailable is probably well beyond his grasp without serious changes to the Constitution. Even if he achieved those, how would he convince the millions of people who “overwhelmingly choose” the tools he doesn’t like to get on board?

Millions of semiautomatic weapons are already in private hands. Gun owners have demonstrated their willingness to ignore restrictions, as seen in the 5 percent compliance rate for New York’s “assault weapon” registration law and the overwhelming defiance that met California’s and New Jersey’s bans on such guns. “More than a year after New Jersey imposed the toughest assault-weapons law in the country, the law is proving difficult if not impossible to enforce,” The New York Times reported in 1991.

More recently, Americans have taken to making their own firearms to hobble restrictive laws.

Even generously assuming he knows what he’s talking about, the most President Biden can accomplish by pushing for a ban on semiautomatic weapons is to increase confrontations between enforcers and the public. That’s if he isn’t just thwarted in his efforts by constitutional protections for individual rights. The genie isn’t going back into the bottle.