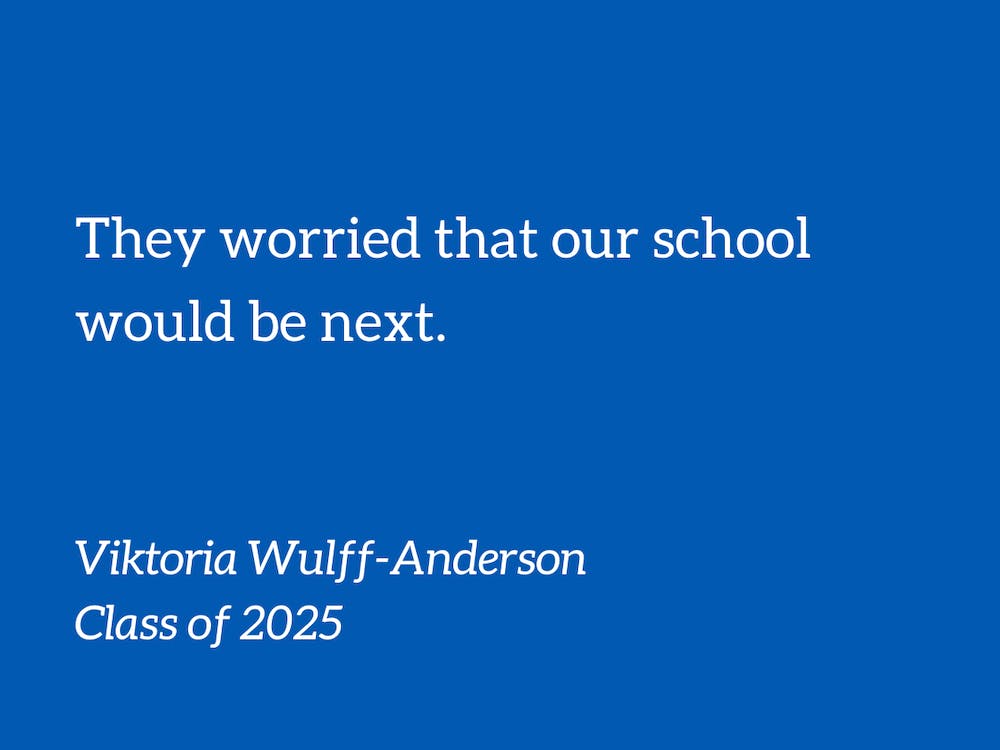 On Dec. 14, 2012, my fourth-grade teacher Mrs. White received a phone call and ran out the door, leaving a classroom of nine-year-olds unoccupied.

My peers and I were given the rare opportunity to indulge in shenanigans and tomfoolery without adult supervision — an opportunity most schoolchildren could only dream of. And yet, we sat quietly at our desks because we couldn’t shake the feeling that something was horribly, horribly wrong.

Mrs. White was the kind of teacher who could derail any lesson into a story about her life. I’ve lost most of those personal details to the unforgiving nature of time, but I remember who she described as being the “shining star” in her life: her daughter, a gap-toothed five-year-old and proud kindergartener at Sandy Hook Elementary School. And every morning, she would skip past the first-grade wing with a hankering for her next academic adventure.

I didn’t know it at the time, but on Dec. 14, 2012, 26 students and staff members had been massacred at her daughter’s elementary school, all with so much more life to live. The Sandy Hook Elementary School shooting had taken place, and its gunshots echoed into neighboring cities and towns.

The echoes were cacophonous in Danbury, where I lived and went to school. A few minutes after Ms. White had left, other teachers entered the classroom in hushed whispers. They attempted to assure us that everything was alright, but their shaking hands and pallid faces betrayed their true concerns. Fairfield County is small, and they knew their fellow teachers who worked at Sandy Hook Elementary School. Fairfield County is small, and they worried that our school would be next.

Our elementary school was located less than 10 miles, less than 15 minutes, away from Sandy Hook. While the front entrance required an ID to enter, the other entrances were less secure as students and staff ran in and out of the building. And while lockdown plans were in place, no one had practiced them in years.

They discretely sent us home early, trying not to ring our young alarm bells, but we brought home unease in our backpacks anyways.

When the bus came to my stop, I ran into the arms of my parents. I had long since been allowed to walk home by myself from the bus stop, and my father had long since started working long hours in Manhattan. Yet, both my parents were there and unwilling to let me go until I was brought home. They would tell me what happened later that evening, shedding a few rare tears.

Dec. 14, 2012 marked a turning point in my life, the transition between a “before” and “after.” Much like how the average person can recount exactly where they were when they found out that the first lockdown of the COVID-19 pandemic was about to begin, I can’t erase the vivid memory of Dec. 14 or the personal impacts it has had. Mrs. White would return after winter break (and her daughter was fortunately alive and well), but she would teach with a slower and gloomier touch. I missed out on much of the fourth-grade curriculum as a result. And when I returned from winter break, I struggled to chatter or laugh or look at the glass half-full with the ease I once did. I struggled to pen the same happy endings and heroes into my writing assignments, and I struggled to contribute to class discussions with the same kiddie lenses. The disillusionment with the world that typically comes with adolescence had hit me before puberty even started.

Dec. 14, 2012 marked a “before” and “after” for the community as well. The image of a tranquil Connecticut town where nothing ever happens was tarnished. Lockdown drills became commonplace. Parents sent their kids to school with a knowing fear. The state passed some of the strictest gun laws, banning assault weapons and enforcing comprehensive background checks. Memorials and organizations like the Sandy Hook Promise ensured that our community would “never forget.”

When the echoes died down, we were promised something like this would never happen again.

We were lied to.

If my description sounds repetitive and tiresome, then take a look at the history of gun control and gun culture in the United States. In the months following the Sandy Hook tragedy, Congress proposed an assault weapons ban and a universal background check, but they failed to get the 60 votes needed to pass both pieces of legislation. And while other gun control laws have been brought to the table over the years, none have been successful. The list of mass shootings keeps growing, and no sweeping changes to gun control have been implemented.

Only five states have passed stricter gun control laws since December 2012, and it seems that many seek to diminish rather than increase those numbers. The Supreme Court recently struck down concealed carry laws in New York, and the National Rifle Association filed a federal lawsuit in September seeking to nullify the ban on assault weapons in seven states, including Connecticut.

And while gun violence is on the rise, so too are the lackluster and dismissive responses to the epidemic. Americans’ desire for stricter gun laws has always peaked after tragedies involving gun violence, but it’s taking less and less time for that desire to decline and for those tragedies to be forgotten. Media and public attention on individual events have diminished significantly as shootings become more commonplace. Some have even taken to spreading false narratives, claiming that the mass shootings are made-up and slandering the names of the victims of gun violence and their families (I’m looking at you, Alex Jones. I hope that lawsuit prevents you from ever spreading such malice again).

Yet, while I’ve developed a keen awareness and passion for gun control because of my connection to Sandy Hook, the demands for change are widespread in my generation. We were the ones who grew up listening to the violence that murdered our fellow students, the ones wondering if we could be next. We were the ones in lockdown drills, the ones who walked out of our classrooms after the Stoneman Douglas High School massacre. And we are the generation that sees gun control as one of the most important issues facing our nation.

We saw with the 2022 midterm elections that we have the power to evoke change in the US (several Republicans are even calling for the voting age to be increased in fear of what we can do). It’s time to use that power to continue bringing gun control to the forefront of conversation, to keep tragedies involving gun violence from getting forgotten and to ensure that “never again” truly means “never again.”

Viktoria Wulff-Anderson is a Trinity sophomore. Her column typically runs on alternate Thursdays.

Get The Chronicle straight to your inbox

Signup for our weekly newsletter. Cancel at any time.

Viktoria Wulff-Andersen is a Trinity sophomore and an opinion managing editor of The Chronicle’s 118th volume.

Virginia Senate committee advances bill toughening gun storage laws
If the CSPC Would Ban Gas Stoves, Imagine How it Would Treat Guns
Editorial: Unchecked gun violence reveals who we are as a nation
Shooting the Breeze # 29
Nicholas Kristof: A smarter way to reduce gun deaths