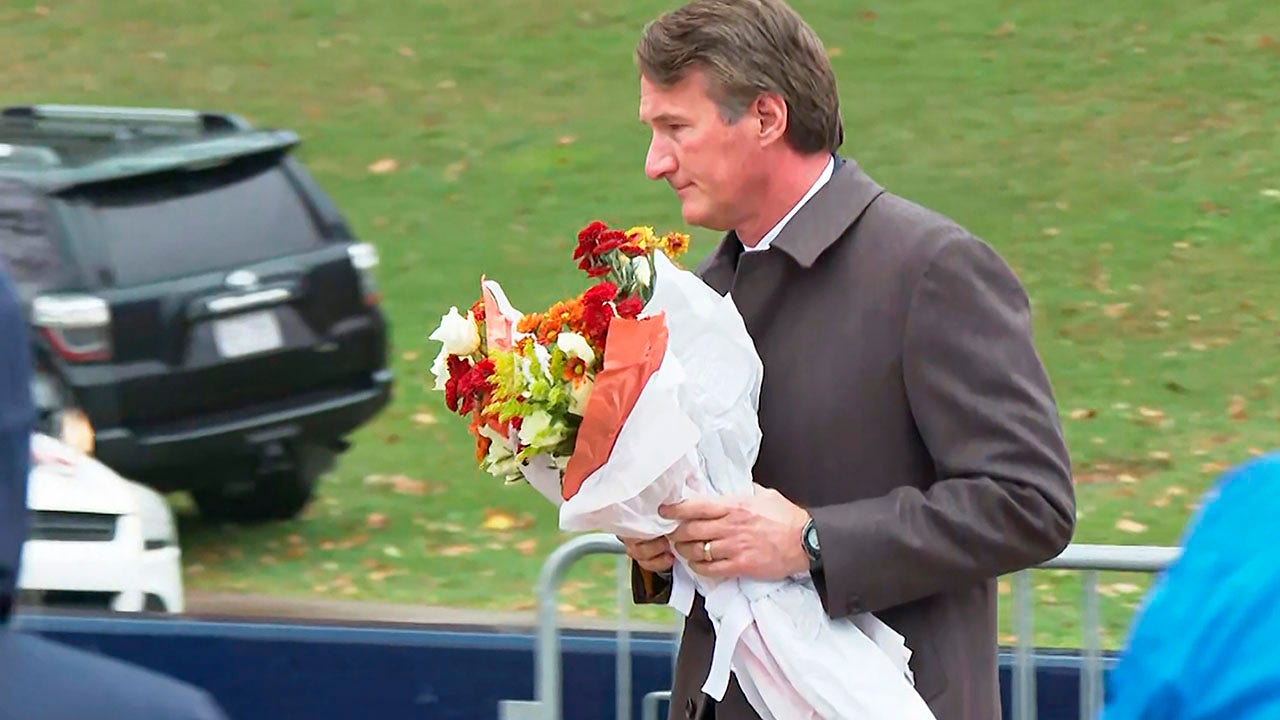 Virginia Gov. Glenn Youngkin visited the UVA campus on Tuesday morning, placing flowers at a memorial for the three football players killed allegedly by a former teammate after a field trip.

The motive remains a mystery for the shooting that erupted on a charter bus at an on-campus parking garage, as does how student suspect, Christopher Darnell Jones, obtained the handgun used in the shooting despite his prior criminal record and campus ban on firearms. Jones was apprehended following a 12-hour manhunt and extensive search of the university grounds.

“It’s horrific, it’s truly horrific, and we’ve got three young men whose lives were cut so short. It’s a moment for all of us to recognize that families are going to need to be supported,” Youngkin said Tuesday. “The community here needs to be supported, and it’s just horrific. I also want to thank our law enforcement … We want to pray for the two students who are still recovering in the hospital. And this is a moment for us to come together and recognize that there are so many things that are insignificant relative to what this community and these families are facing today.”

Morgan has since been released from the hospital, as Hollins underwent a second surgery Tuesday.

Youngkin, a Republican, has faced criticism following the shooting for prioritizing other issues, such as combating critical race theory in schools and bolstering parental rights, over gun control.

But as investigators have yet to reveal how Jones obtained the handgun used in the shooting, it’s unclear whether any legislation could have prevented or altered the events leading up to the shooting.

“You’ll be glad to know the governor of Virginia, a lifetime NRA member, is praying for the University of Virginia,” Shannon Watts, founder of the gun safety group Moms Demand Action, which was founded following the Sandy Hook tragedy, tweeted Monday. “His priorities are restricting trans rights, critical race theory and abortion. He’s done nothing to address gun violence.”

“If your prayers without action worked, the shooting at the University of Virginia wouldn’t have happened in the first place,” Watts added, replying to Youngkin. “DO YOUR JOB.”

In February, the governor responded to the pattern of bomb threats received by Virginia’s historically black colleges and universities.

Memorial flowers and notes line walkway at Scott Stadium after three football players were killed in a shooting on the grounds of the University of Virginia Tuesday Nov. 15, 2022, in Charlottesville.
(AP Photo/Steve Helber)

“I am angry and deeply concerned by the recent pattern of bomb threats plaguing our Historically Black Colleges and Universities,” Youngkin said in a statement at the time. “Today, I spoke to the presidents of Virginia’s HBCUs regarding the disturbing repeated threats on their schools. Next week, I will ask the General Assembly to provide emergency funding to our HBCUs for security and campus safety. I am committed to harnessing state resources to support these institutions and will work together with them on a continued coordinated response that ensures the safety of our HBCU students and faculty.”

UVA football player Michael Hollins Jr. is one of the two surviving victims of a shooting that also killed three of his teammates.
(Credit: Virginia Cavaliers Official Athletic Site)

The governor’s budget provided $45 million for school resource officers and $400 million for law enforcement support. In light of tragedies in Uvalde, Texas, Youngkin also supported K-12 digital mapping to increase school safety and over 1,000 schools in Virginia are participating.

Memorial flowers and notes line walkway at Scott Stadium after three football players were killed in a shooting on the grounds of the University of Virginia Tuesday Nov. 15, 2022, in Charlottesville.
(AP Photo/Steve Helber)

Jones, a day shy of his 23rd birthday, was ordered held without bail Wednesday. After his first court appearance, prosecutors revealed more details about Jones’ prior criminal history.

Jones was arrested on February 22, 2021, in Chesterfield County, Virginia, for a concealed weapons violation. He was convicted in that case on June 10, 2021. At the time of his arrest, there were outstanding warrants for hit-and-run property damage and reckless driving in Petersburg County.

The case was heard in Petersburg County on October 28, 2021, and Jones was sentenced to 12 months. But the sentences for both cases, from two separate jurisdictions, were suspended, Albemarle County Commonwealth’s Attorney James M. Hingeley revealed to reporters.

Jones, who walked onto the UVA football team as a freshman in 2018 but never played a game, had been on the UVA’s threat assessment team’s radar over an alleged criminal incident involving a weapons violation that happened outside Charlottesville in February 2021, University Police Chief Timothy Longo Sr. said at a press conference on Monday. He was facing administrative charges for failing to report the matter to the university, as is required of all UVA students. Jones had not been on the football team for more than a year.

Jones also faced a prior hazing investigation, but the probe was “eventually closed due to witnesses who would not cooperate with the process,” Longo said. Asked if the hazing incident related to the football team at a follow-up press conference with the coach Tuesday, UVA Athletics Director Carla Williams said she was not aware of that and did not have any details beyond what the police said Monday.

Jones’ father told local news outlets he believed his son was being picked on and was growing paranoid.

Danielle Wallace is a reporter for Fox News Digital covering politics, crime, police and more. Story tips can be sent to danielle.wallace@fox.com and on Twitter: @danimwallace.