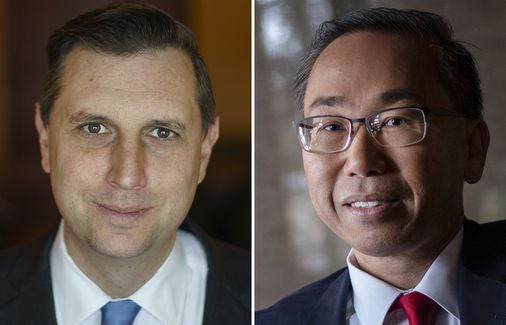 PROVIDENCE — In a race drawing national attention, Democrat Seth Magaziner beat back Republican Allan W. Fung in the battle for Rhode Island’s Second Congressional District seat, which has been in Democratic hands for more than three decades.

Fung conceded with 98 percent of polling places reporting. Magaziner had 50.1 percent of the vote, Fung had 47.0 percent, and Moderate Party candidate William H. Gilbert had 2.7 percent, according to the state Board of Elections.

Magaziner celebrated his victory at the Graduate Providence Hotel, saying, “You have my commitment that I will fight hard for our state. I will fight to bring Rhode Island values to Washington. We are a small state, we are a scrappy state. But we are the best state. And it is an honor to represent you. Thank you so much, Rhode Island.”

Magaziner noted that he trailed in every poll during the campaign. He also noted that his victory fell on the birthday of his father, Ira Magaziner, an aide to former President Bill Clinton. He thanked Fung for a hard fought campaign and his career of public service.

In his concession speech, Fung said: “We knew this was going to be a hard-fought battle. We knew making history would not be easy. I want to take a moment to congratulate my opponent, Seth Magaziner, on his victory.”

As some supporters shouted, “We love you!,” Fung took a breath at the podium, and shook his head. He thanked his supporters, voters, donors, and volunteers, and his family, who were with him as the crowd thinned out at Twin Oaks restaurant in Cranston.

“I never wavered from my commitment to you to setting our country on a better path, a more affordable path,” Fung said. “While we didn’t achieve our shared vision tonight, please know that I will continue to work in any capacity I can to make our state better for all of you and for generations to come.”

At the Event Factory in Warwick, where some Republicans gathered Tuesday night, GOP Chairwoman Sue Cienki said she was surprised by Fung’s loss. When Republican candidates were knocking on doors, voters told them about their economic concerns. But at the end of the day, “deep blue stayed blue,” Cienki said.

A GOP victory in deep-blue Rhode Island would have packed symbolic significance since there are no House Republicans from New England currently serving, and Maine’s Susan Collins is the only Republican senator from the region.

Fung, whose parents moved to Rhode Island from Hong Kong, would have been the first Asian American — and the first person of color — to represent Rhode Island in Congress.

The race received national media coverage and brought in millions of dollars in outside spending. Between outside groups and the candidates themselves, total spending on the race stands at nearly $14 million, including $8.6 million in outside spending, according to OpenSecrets, a D.C. nonprofit that tracks campaign finance data.

House minority leader Kevin McCarthy, a California Republican, came to Rhode Island in August to back Fung’s candidacy. And the Congressional Leadership Fund, a super PAC aligned with McCarthy, poured $3.7 million into the Second Congressional District race — far more than any other outside group, according to OpenSecrets data. Of that total, $3.4 million went into opposing Magaziner.

Meanwhile, the House Majority PAC — the Democratic counterpart of the Congressional Leadership Fund — pumped $1.9 million into the race, with all of it going toward opposing Fung, according to OpenSecrets.

Fung spent 12 years as mayor of Cranston, Rhode Island’s third-largest city, and he had statewide name recognition after running for governor in 2014 and 2018, losing both races to Democrat Gina M. Raimondo, now the US commerce secretary.

Fung presented himself as a moderate Republican in the mold of former US senators John and Lincoln Chafee or Massachusetts Governor Charlie Baker, saying, “I’m not an extremist, not a Trumper.” He said he would vote against Senator Lindsey Graham’s bill to create a federal abortion ban at 15 weeks of pregnancy, with limited exceptions.

Magaziner spent eight years as Rhode Island’s general treasurer, and after first announcing a run for governor, he jumped into the congressional race in January after Democratic US Representative James R. Langevin said he wouldn’t seek reelection. Magaziner said it was critical for Democrats to field a proven general election candidate who could prevent Republicans from taking the congressional seat.

Amanda Milkovits and Brian Amaral of the Globe Staff and Globe Correspondent Kayla Guo contributed to this report.

Solo Overnight Building a Log Cabin in the Woods and Deep-Fried Cajun Turkey Legs
The NRA Used to Donate to Democrats’ Campaigns, Too. Why Did It Stop?
Simple Machine Woodland Hoist
READER’S EDITORIAL: THE GOP AND GUNS
Exotac RipSpool: 3 Minutes to Better Gear