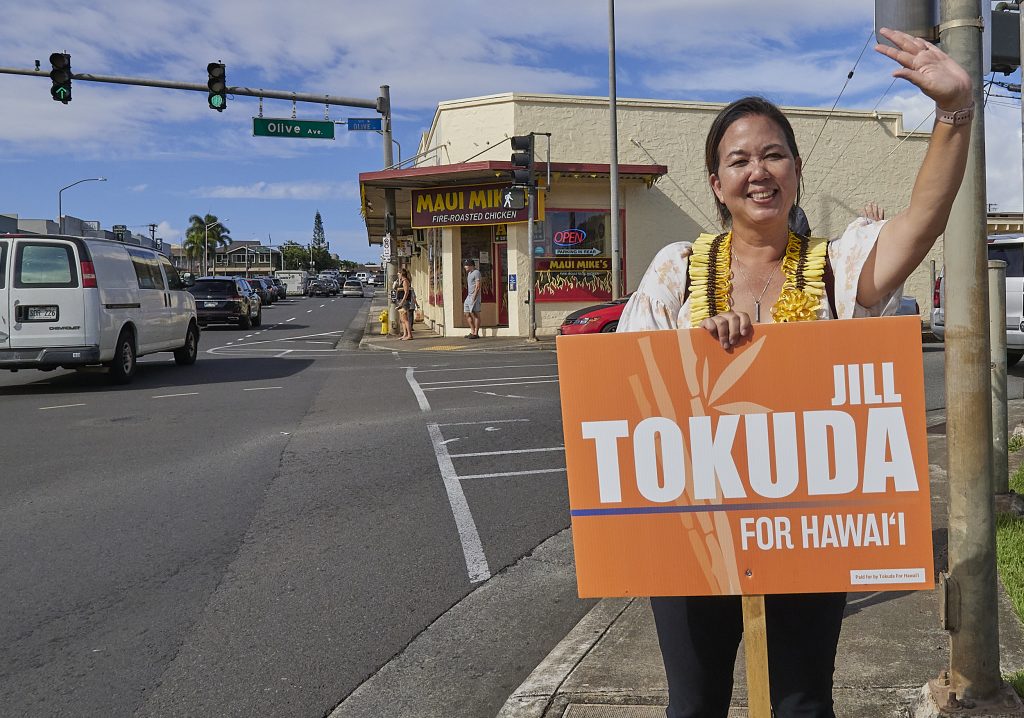 Jill Tokuda, a former state senator who initially ran for lieutenant governor in 2022 before switching races, was elected as Hawaii’s newest member of Congress on Tuesday, according to early results.

She will be joined in Washington, D.C., by Hawaii Congressman Ed Case and U.S. Sen. Brian Schatz, fellow Democrats who easily won their respective races.

Tokuda, 46, will represent the 2nd Congressional District, which includes rural Oahu and the neighbor islands after incumbent Congressman Kai Kahele opted to make an ultimately unsuccessful run for governor instead of seeking reelection.

Kahele’s announcement that he was retiring from Congress after a single, two-year term came as a surprise to many of his supporters, especially considering he built his entire 2020 campaign on the promise that he would stay in Washington for the long haul.

Tokuda was leading her Republican opponent, Joe Akana, 61% to 32%, according to the second round of results released from the state Office of Elections. The results represent a large percentage of the total vote.

Tokuda has promised to bring stability to Hawaii’s 2nd Congressional District, which before Kahele was represented by Tulsi Gabbard, who ran a failed campaign for president in 2020 as a Democrat and is now stumping on behalf of Republican election deniers while spouting right-wing talking points.

Tokuda has already given some thought to what committees she would like to sit on in Congress, and has said she is aiming for seats on Agriculture and Education and Labor.

She originally planned to run for lieutenant governor and even filed the paperwork to do so, but changed her mind when the congressional seat opened up.

Speaking not long after the first results came in, Tokuda told Democrats gathered at the Hawaii Convention Center, “If you ask me now more than ever, this nation, this Congress needs Hawaii. Hawaii is all about aloha spirit. It’s all about making sure that people at the end of the day, no matter what side of the aisle they’re on, treat each other with respect. Civility.”

“But most importantly, they remember that it’s always about the people. People first. Democrats put people first. And so I can’t wait to go to Congress with the best delegation I think we’ve seen in many, many years. I’ll do that in many years,” she added.

A New Face In Washington

Case, meanwhile, was reelected 72% to 24% over Republican Conrad Kress in the contest for the 1st Congressional District while Schatz won 70% to 24% over retiring GOP state Rep. Bob McDermott, according to the second list of results released near 10 p.m.

The question now is whether the trio — along with U.S. Sen. Mazie Hirono, who was not up for election Tuesday — will be in the majority or the minority.

Public opinion polls indicated that Republicans appeared set to win seats in the House, which would give them the majority.

The Senate, however, remained a toss up as close contests in several states had yet to be decided. That chamber is currently split 50-50 and controlled by Democrats, as Vice President Kamala Harris has the authority to break voting ties.

Tokuda was the most prominent Democrat to seek the nomination. Her closest competition in the primary was state Rep. Patrick Branco, who is a relative newcomer to Hawaii politics.

While polling consistently showed that Tokuda had a significant edge over Branco, several outside spending groups waded into the race on his behalf.

Groups such as VoteVets, the Congressional Hispanic Caucus and Web3 Forward, a super PAC that has ties to the cryptocurrency industry, spent more than $1.2 million on Branco’s behalf.

The mainland money became a focal point of the race, particularly after VoteVets began running advertisements attacking Tokuda over a 2012 endorsement she received from the National Rifle Association in the wake of a mass shooting in Uvalde, Texas.

Tokuda ultimately beat Branco by a more than 2-to1 margin in the Aug. 13 primary.

Her race against Akana, meanwhile, was considered predictable given Hawaii Democrats’ historical dominance in federal elections.

Three In A Row For Case

Case, 70, had a relatively smooth ride to winning his third consecutive term in Congress representing CD1, which includes urban Oahu.

In the Democratic primary he faced a challenge from his left by Sergio Alcubilla, a public interest lawyer who used to work for the Legal Aid Society of Hawaii.

Alcubilla garnered support from his campaign from the progressive wing of the party, which was upset with Case over his initial opposition to President Joe Biden’s original “Build Back Better” plan that aimed to spend $3.5 trillion on a wide range of programs, including those meant to cut child poverty, reduce the impacts of climate change and build more affordable housing.

A newly formed super PAC, Our Hawaii Action, even began running ads on behalf of Alcubilla in an attempt to sway voters away from Case.

But the congressman was successful in staving off the attacks, pointing to the fact that he’s secured positions on key committees in Washington, most notably House Appropriations, where he has been able to help direct federal dollars back to the islands.

Case easily beat Alcubilla in the primary winning 76% of the vote to Alcubilla’s 15%.

Similar to Tokuda, there was virtually no contest between Case and his Republican opponent, Kress.

“What’s the real message of this election?” Case told Hawaii News Now shortly before the first results were announced. “I mean, we’ve had a national election in November. We’re going to have to figure that out right now. The Republicans said it was the Democrats weren’t paying attention to inflation and the cost of living and public safety and immigration. And the Democrats said the Republicans weren’t paying attention to the foundations of democracy, to basic understanding, such as women’s right of choice.”

“I think voters don’t think we’ve been paying attention to the issues that are important to them. And I think that’s one of the messages here. But to be honest, whether that’s going to translate into some kind of a ‘come to reality moment’ in Congress — I think it’s going to be a hard slog,” he said.

Another Term For Hawaii’s Senior Senator

Schatz, 50, faced an even easier path to reelection.

His opponent in the primary was Steven Tataii, a 72-year-old conflict resolution consultant who previously ran a failed campaign for Congress in 2016 when he garnered only 797 votes. Schatz beat Tataii by more than 81%.

McDermott, on the other hand, was a more seasoned candidate, but had made the decision early on to campaign on a single issue — shutting down the Navy’s Red Hill fuel facility — while also opting out of raising any money, which put him at even more of a disadvantage in the race.

Schatz has become one of the more successful members of Hawaii’s federal delegation ever since he was appointed to the Senate in 2012 after the death of U.S. Sen. Dan Inouye.

Like Case, he has secured a seat on his chamber’s Appropriation Committee, where he has helped shepherd billions of dollars back into the islands, and is the current chairman of Indian Affairs.

Schatz also serves on the Senate Democratic Caucus’ leadership team as the Chief Deputy Whip and was the head of his chamber’s special committee on climate change when president Donald Trump was still in office.

“On the national level, we’re doing slightly better than we thought, at least on the Senate side,” Schatz told HNN Tuesday evening. “John Fetterman is the next senator from Pennsylvania. And so that’s a pickup. Arizona and Nevada and Georgia are all too close to call. Georgia’s likely to go to a runoff. So we don’t know who’s going to run the United States Senate either for a few days or maybe even for a month or so.”

“But look, we’ve been able to work on a bipartisan basis, even when we’re in the minority. I’ve been in minority for six years, in the majority for four. So, you know, you got to sort of roll with it. The door swings both ways in Washington, but we’re doing better than we thought,” he added.