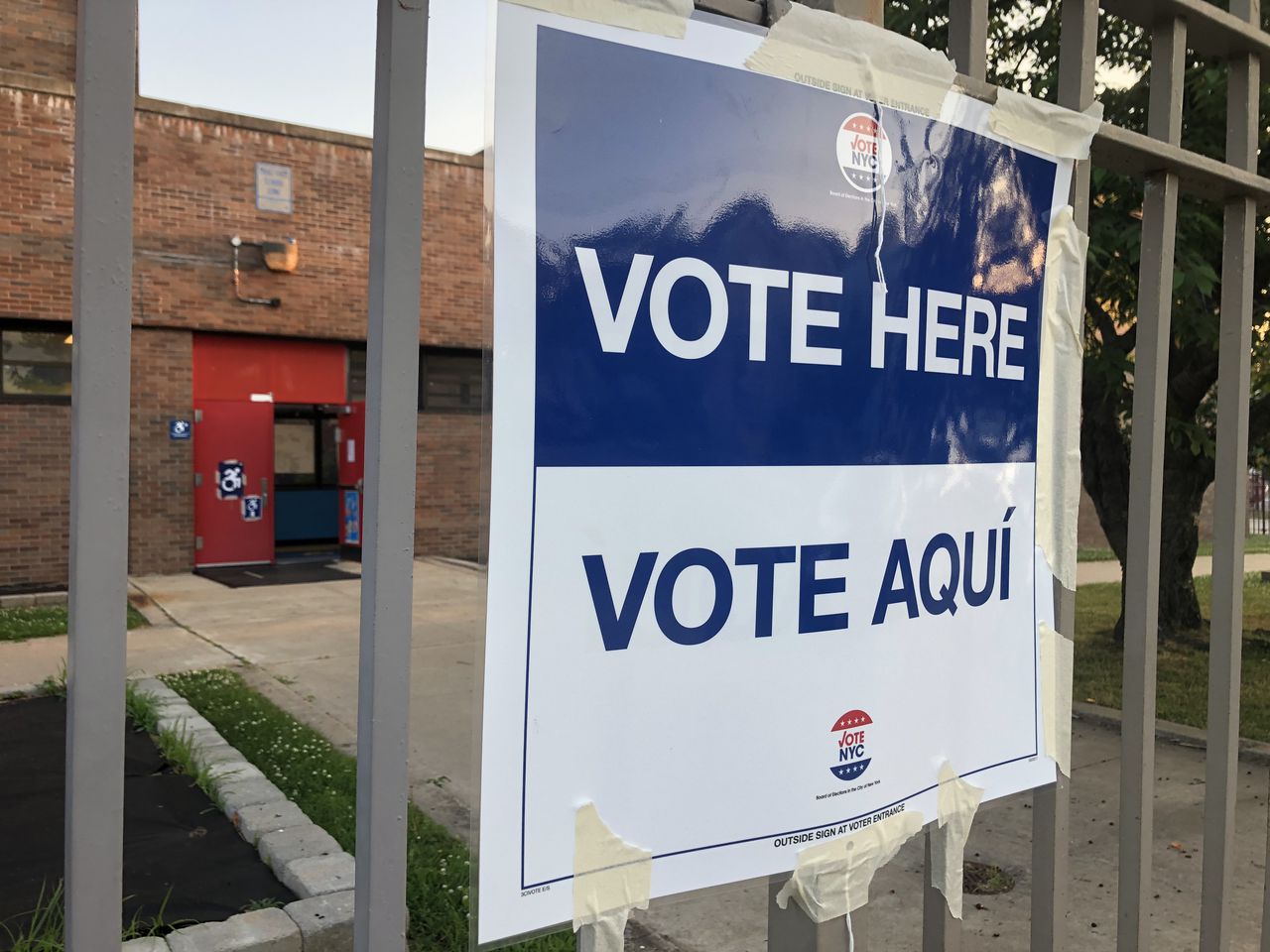 STATEN ISLAND, N.Y. — The campaign trails are coming to a close. It’s time for voters to decide who they want to represent them for the next two to four years.

Learn a bit about the candidates and the ballot proposals for the general election below:

Sen. Charles Schumer (D-NY), who’s running for reelection on the Democratic and Working Family party lines, has served as a U.S. senator since 1999. Since then, the state’s senior senator has worked his way up to the top of his party becoming his chamber’s minority leader in 2017 and its majority leader in 2021.

A lifelong Brooklynite, Schumer has developed a reputation as a political guru with a focus on state issues on the local level. He previously served in the New York Assembly and in the U.S. House of Representatives.

Republican and Conservative candidate Joe Pinion’s campaign slogan is “take back the dream.” Much of his campaign website focuses on Schumer’s long career in office and the need for new leadership. An online campaign ad styles Schumer as a “dinosaur.”

A native of Yonkers, Pinion works as a conservative news commentator and hosted his own show on the Newsmax channel.

Diane Sare, LaRouche-line candidate, made some local noise recently when she and some of her supporters protested a College of Staten Island town hall held by Sen. Kirsten Gillibrand. Their protest started as an anti-war crusade, but developed into audience members asking why Schumer wouldn’t debate Sare.

Incumbent Rep. Nicole Malliotakis (R-Staten Island/South Brooklyn), who is running on the Republican and Conservative lines, is the preferred candidate of the Conservative Party of New York State. Self-identifying as a “no nonsense leader,” Malliotakis advocates for government accountability and transparency, supporting law enforcement and securing the nation’s borders. The congresswoman previously represented the East Shore and South Brooklyn in the State Assembly.

Former Democratic Rep. Max Rose is hoping to win his seat back from incumbent Congresswoman Malliotakis. Rose lost his congressional reelection bid in November 2020 to then-Assemblywoman Nicole Malliotakis by a margin of just over 18,000 votes. She received about 53% of the overall vote and about 55% of the vote in the Staten Island part of the district.

Upon announcing his candidacy, Rose said priorities haven’t changed much. He’s still focused on fighting back corruption in Washington; has serious concerns about public health due to the COVID-19 pandemic and the opioid crisis; helping small businesses that have had a particularly hard time, as well as healthcare and child care concerns.

Governor Kathy Hochul is running for re-election as governor on the Democratic and Working Family lines. She served as New York’s lieutenant governor between 2014-2021, but took her current office in Aug. 2021 after former Governor Andrew Cuomo resigned amid a host of scandals.

Coming up through the Buffalo-area political ranks, Hochul developed a reputation as a conservative Democrat even earning an endorsement from the National Rifle Association in 2012 when she ran for re-election to a congressional seat representing part of western New York.

Since taking her office, Hochul has signed a variety of legislative packages, including one providing stronger support and protections for domestic violence victims and another creating a preservation trust benefiting the state’s public housing systems.

She’s also courted controversy with her $850 billion deal for a new Buffalo Bills stadium and her administrations purchase $637 million in COVID-19 rapid tests from a campaign donor in December and January.

Antonio Delgado stepped into the role of lieutenant governor in May following Brian Benjamin’s resignation amid allegations of campaign funding fraud. Prior, he practiced law and then represented New York’s 19th congressional district for three years. Hochul appointed Delgado to his current role as well as her running mate to replace Benjamin.

Zeldin has made public safety his central campaign issue even having a few scares of his own when an audience member accosted him during an upstate campaign event, and there was a shooting incident outside his Long Island home while his daughters were home.

The public safety issue has helped the Republican narrow his polling differential with Hochul, but he’s been dogged by his stances against abortion and support of former President Donald Trump.

During her time in office, she has taken on a variety of powerful people and institutions, including former President Trump, former Gov. Andrew Cuomo and Amazon.

Republican and Conservative candidate Michael Henry is a New York-based attorney primarily focused on commercial litigation, according to his campaign website.

Like most candidates this election cycle, Henry lists his primary issue as crime.

The State Legislature appointed Comptroller Tom DiNapoli in 2007. He’s won three elections since then and is seeking his fourth time.

Comptrollers have a variety of duties, including overseeing the state’s $246 billion pension fund, and during his time in office, DiNapoli has developed a reputation as a reformer.

In a recent Sienna poll, the incumbent had a 24-point lead over his opponent.

Paul Rodriguez, who styles himself as a “global financial expert” on his campaign website, hopes to unseat DiNapoli.

Democratic candidate Jessica Scarcella-Spanton — whose former boss is Sen. Diane Savino — raised her profile in the early days of the coronavirus (COVID-19) pandemic working as the senator’s director of operations helping people secure testing and vaccine appointments as they became available.

Following her time with Savino, Scarcella-Spanton worked as assistant director of government and community relations for the Metropolitan Transportation Authority.

Small business owner and community advocate Joseph Tirone is taking on his second run for a state legislative position. In 2014, he challenged Assemblyman Michael Cusick (R-Mid Island) for his seat, finishing with 41.4% of the vote.

Tirone is aiming for the State Senate seat in the 23rd District, and is confident his extensive experience working in the community over the past eight years has prepared him for the role.

The founding broker of Compass Staten Island Real Estate has worked in residential and commercial real estate with involvement in a number of North Shore property sales.

He is a Staten Island Board of Realtors (SIBOR) Community Service Award recipient and has been recognized for his response to COVID-19 emergency supply needs and Hurricane Sandy in 2012.

State Sen. Andrew Lanza (R-South Shore) has served in his office since 2006 and last faced a Democratic challenger in 2012 when he won with about 78% of the vote.

Despite his staunch conservative stances, the longtime senator has worked across the aisle on several issues, including the maintenance of the Verrazzano-Narrows Bridge discount for Staten Islanders.

A former City Councilman for the South Shore, Lanza will become the Island’s longest serving official at the state level when Sen. Diane Savino and Assemblyman Mike Cusick leave office at the end of the year.

Assemblyman Charles Fall (D-North Shore) is running for reelection to his seat, which he has held since 2019. He is the first Black Muslim to represent Staten Island in the State Assembly.

Legislation that Fall has sponsored and successfully passed include policy to strengthen protections for minors from sex offenders, amending laws to enhance employee transparency, and protect access to urgent care facilities.

That year the former police officer and president of the the community education council for District 31 faced a third-party challenge and won with about 89% of the vote. He hasn’t faced a challenger since.

Republican and Conservative candidate Sam Pirozzolo is a former president of the community education council for District 31 and operated a family-owned optical practice for 33 years. He identifies as a strong advocate for law enforcement in favor of “refund[ing] the police.”

Pirozzolo is vehemently opposed to the state’s current bail reform policies and has said he would repeal them, if elected, as part of his plan to address public safety issues. He is also passionate about improving the education system and ending COVID-19 mandates.

Democrat and Independent candidate Vincent Argenziano, a former chief of staff for outgoing Assemblyman Michael Cusick (D-Mid-Island), has served as deputy commissioner for the office of the Richmond County Public Administrator since 2019.

A moderate who lists public safety and community investment as his primary issues, Argenziano describes himself as a longtime Staten Islander who graduated from the College of Staten Island.

In addition to receiving his former boss’ endorsement, the candidate has accumulated a variety of endorsements from organizations and labor unions, including the Sergeants Benevolent Association, United Federation of Teachers, and the New York State Nurses Association.

He defeated Brandon Patterson, a former staffer for State Sen. Diane Savino (D-North Shore/South Brooklyn), in 2020. This year, the Republican, who was recently elected to lead the local party, will be unopposed on the ballot.

Voters will select three of three candidates on their given ballot lines.

At age 35, Lantry became the youngest judge in New York City when he was ceremonially sworn in to the Civil Court of Richmond County in March. Lantry, who is the former Staten Island GOP chairman, championed the Civil Court seat in November 2021 with 75% of the vote, with more than 52,000 voters casting their ballots for him.

Matthew Santamauro, a native Staten Islander, served as a prosecutor in the Richmond County District Attorney’s Office before building his private practice.

“My career path has instilled in me the temperament and discipline to analyze the issues presented to judges every day,” the lifelong Staten Islander says on his campaign website. “If elected to serve you as Civil Court Judge for Staten Island, my priorities will be simple: I will use my knowledge and experience to reach fair, impartial and just decisions while maintaining an efficient courtroom.”

Before that, she served as a supervisor and litigator with the Administration for Children’s Services, and as a community coordinator at the NYC Mayor’s Office of Veterans Affairs.

Proposal 1 would have a say in the state’s ability to borrow millions of dollars to enhance climate change infrastructure, bolster community protections and fund a healthy environment, dubbed the “Clean Water, Clean Air, and Green Jobs Environmental Bond Act.” Total cost of the plan is $4.2 billion.

Specific allocations would include:

Proposals 2-4 were written by the city’s Racial Justice Commission (RJC) which was tasked with identifying how systemic racism manifests in city government.

Ultimately, the commission’s goal is to increase equity among different racial groups by changing city laws that uphold and enable systemic racism and other identity-based systemic discrimination.

Ballot Question #2: Add a Statement of Values to Guide Government

This proposal would amend the New York City Charter to: Add a preamble, which would be an introductory statement of values and vision aspiring toward “a just and equitable city for all” New Yorkers; and Include in the preamble a statement that the city must strive to remedy “past and continuing harms and to reconstruct, revise, and reimagine our foundations, structures, institutions, and laws to promote justice and equity for all New Yorkers.” The preamble is intended to guide city government in fulfilling its duties.

Proposal 3, if passed, would do the following:

This proposal would amend the City Charter to:

Require the city to create a “true cost of living” measure to track the actual cost in New York City of meeting essential needs, including housing, food, childcare, transportation and other necessary costs, without considering public, private, or informal assistance, in order to inform programmatic and policy decisions; and require the city government to report annually on the “true cost of living” measure.