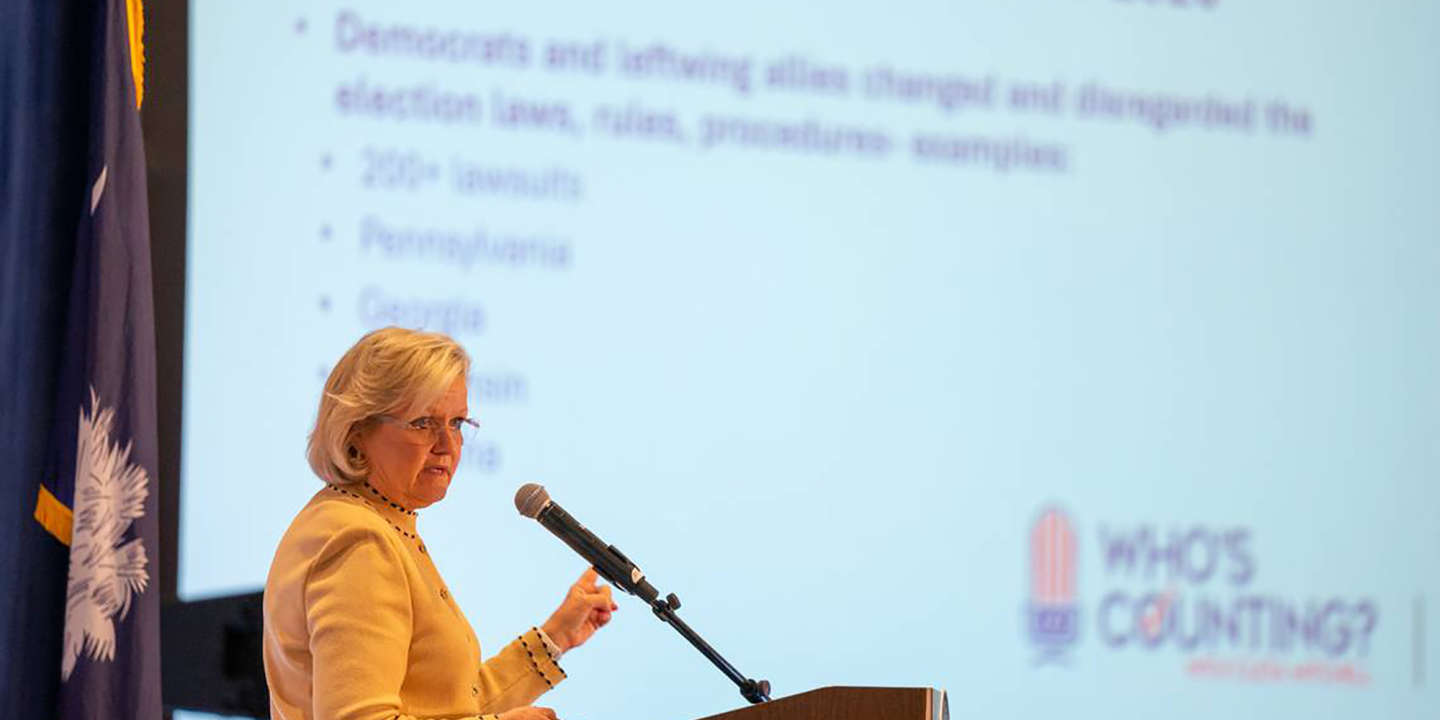 It has been a long slide for Cleta Mitchell over the past four decades, from the Democratic ranks to the Republican fringes. This 72-year-old lawyer will play a major role during the counting of votes and the announcement of results in the midterm elections on November 8. As a convert to Trumpism, she oversees a vast network of activists, an “army of patriots,” who are responsible for ensuring election integrity. One thing of note that places her at the heart of Donald Trump’s world is that she is a regular guest on a podcast hosted by Steve Bannon. Mr. Trump’s former special advisor was sentenced to four months in prison for refusing to cooperate with the legislative committee following the attack on Capitol Hill on January 6, 2021.

Ms. Mitchell entered public life as a Democrat. After serving in the Oklahoma House of Representatives from 1976 to 1984, she grew tired of local politics. A specialist in administrative law, she witnessed the conviction of her second husband, a banker, for fraud in 1992. According to a 1996 New Yorker profile entitled “The Outsider,” she became convinced that “overreaching government regulation is one of the great scandals of our times.” The early 1990s were a time of change for her as she sought a national career in Washington, DC. The first thing she did was push for term limits in Congress.

‘The art of political war’

She stopped identifying as a Democrat in 1995. In conservative circles, she quickly gained fame for her work on election finance issues. In the past, she has worked for Republican candidates, the Grand Old Party (GOP) and the National Rifle Association (NRA), the main gun lobby. Her interest in the issue of vote counting began with the 2000 presidential election and the dispute between George W. Bush and Al Gore over the Florida results. This is what she wrote in the Wall Street Journal, in a November 2000 op-ed denouncing Democratic attempts to change Florida’s election rules: “If, as a result of all this, Republicans don’t commit themselves to learning and practicing the art of political war, as well as its natural extension in the courtroom, there may not be much of a GOP to kick around anymore in the future. “

During the early 2010s, she was part of the new wave of Republicans stemming from the Tea Party movement, which foreshadowed the rise of Trumpism. Furthermore, she has defended conservative organizations who denounce IRS abuse. She switched to partisan involvement after she became acquainted with Donald Trump. Following his defeat in the 2020 presidential election, she was a member of the legal team trying to gather evidence of voter fraud.

The day after the election, Ms. Mitchell was interviewed by Fox News. “We’re rechecking and finding dead people who voted,” she said, referring to voters who moved from one state to another to cast their ballots or people who voted twice. As revealed by the Select Committee to Investigate the January 6 Attack on the Capital, she was the one who contacted her law colleague John Eastman. Her idea was to bypass the American process of determining the all-important electors. “John – what would you think of producing a legal memo outlining the constitutional role of state legislators in designating electors?” she wrote two days after the presidential election. This would be a trampling of the Constitution and a violation of the democratic process. In her oft-repeated words, “We don’t live in a democracy. We live in a constitutional republic.”

On January 2, 2021, Ms. Mitchell was at the side of the former president during a phone call with Georgia Republican Secretary of State Brad Raffensperger, urging him to “find” 11,000 additional votes for him. Foley & Lardner announced the attorney’s departure shortly after this conversation was revealed in the press. Her separation was characterized as a blessing in a recent profile by the New York Times Magazine. She said, “Finally, I had the opportunity to no longer worry about having clients or billing by the hour. That’s what’s so amazing. The left thought they had vanquished me. That’s why they go after me. They thought, ‘Ding dong! The witch is dead.’ And the fact is I refuse to go away.”

That’s the least we can say. It became evident after 2020 that the Trump camp needed to be more professionally prepared for the next election. Ms. Mitchell has been actively involved in the massive grassroots organizing effort as the leader of the Election Integrity Network. This was launched by the Conservative Partnership Institute, a think tank devoted to conservatism, and spearheaded by Mark Meadows, the former White House chief of staff to President Trump.

The purpose of the network is to recruit a veritable “army” to be deployed to vulnerable counties in states including Georgia, Arizona, Michigan, Pennsylvania, North Carolina and Wisconsin. The Election Integrity Network’s seminars serve as a meeting point between the classic Republican apparatus and the MAGA (“Make American Great Again”) movement made up of extremist groups and local organizations. Several US media outlets – including Politico and ABC – have obtained recordings of these meetings, which are closed to the press.

These events contain a mixture of conspiracy propaganda about election fraud and so-called “training” sessions held for aspiring observers and officials involved in election management. In short, every ballot should be checked, with any suspicion triggering a challenge procedure, and election officials who are not MAGA endorsed should be harassed. In a seminar that was recorded and leaked, Ms. Mitchell explained that Democrats were trying to build a “new American majority.” She said that they claim their goal is to produce a numerical majority consisting of young people, people of color and unmarried women. That’s 150 million people, representing 64% of voters in America.

Translation of an original article published in French on lemonde.fr; the publisher may only be liable for the French version.