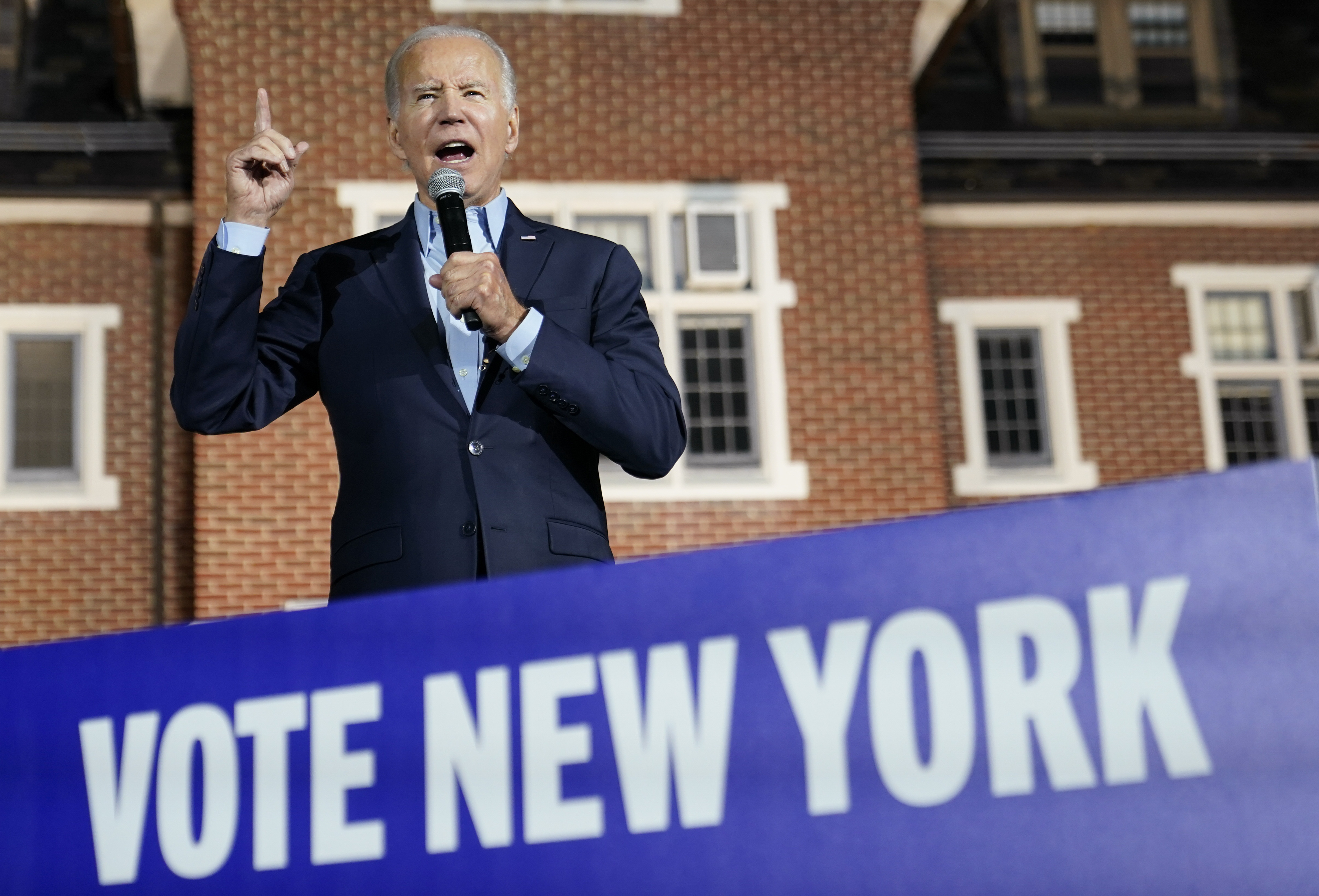 YONKERS, N.Y. — President Joe Biden appeared with Democratic Gov. Kathy Hochul on Sunday, urging voters to turn out to vote in the final days before an extraordinarily close election cycle.

“New York, you have two days to make sure the rest of New York knows the good that they have in Kathy Hochul,” the president said as he addressed a crowd of supporters at Sarah Lawrence College, referring to the moment as an “inflection point” in the nation’s history. “Two days until the most important election in our lifetime.”

Recent weeks have seen high-profile Democrats flock to New York, an unexpected battleground state on Election Day, which is Tuesday. Slipping polls have left Hochul in a tight race with Republican gubernatorial candidate Lee Zeldin, and at least a half dozen close congressional races in the state could help determine which party maintains control in Washington.

Around a thousand people gathered on the college’s south lawn to hear the president and governor speak. Zeldin took his campaign Sunday on a daylong flurry of rallies across upstate.

Biden’s visit — the first presidential appearance in Yonkers in nearly 50 years — wasn’t even the first time a president stumped for Hochul this weekend. On Saturday, former President Bill Clinton appeared alongside the governor in Brooklyn. The last-minute flood of heavyweights has signaled rising Democratic anxiety over losing one of the party’s long-established strongholds, where a Republican governor has not been elected since 2002.

Biden praised the records of Hochul and congressional Democrats, while painting Zeldin as a threat to progress in the state. He pointed to Hochul as a champion of gun safety and abortion rights, crediting her with improvements in the state’s infrastructure, expanded internet access, cleaner drinking water and multi-billion dollar investments from Micron and IBM in the state this year.

“This couldn’t have happened without your governor,” said Biden, who also visited both Micron and IBM in New York over the past month.

Republicans looked to the president’s Sunday appearance as a sign they are the cusp of victory.

“Kathy Hochul sees the writing on the wall but she has nowhere left to turn — that’s the only explanation for why she would invite deeply unpopular Joe Biden to campaign with her,” Republican National Committee spokesperson Andrew Eisenberger said in a statement. “Biden and Hochul’s policies destroyed New York’s economy and their criminals-first agenda has made communities less safe, which is why New Yorkers will elect Republicans up-and-down the ballot on Tuesday.”

Like others who spoke before him, Biden looked to Zeldin’s congressional record as a frequent punching bag and contrasted it to Democratic legislative wins, turning “Congressman Zeldin voted against it” into a common refrain of the night.

Hochul, who joked she was just “a warm-up act for the president,” criticized Zeldin for stating nothing changed in New York in the aftermath of the Supreme Court overturning Roe v. Wade as she looks to be New York’s first woman elected governor. She was the lieutenant governor and succeeded Gov. Andrew Cuomo when he resigned in August 2021 amid scandal.

“You know why nothing changed here? Because I’m the governor,” she said. “It’s not that complicated.”

Democrats repeatedly warned against Democratic complacency amid the threat of Republican extremists, appealing to the power of young voters in the upcoming election.

“He’s starting to ride the subway,” Schumer said, pointing to Zeldin’s many ads centered on crime on the city’s subways. “But guess who voted against the $15 billion to keep our subways and mass transit and commuter rails going?”

Democrats aren’t the only ones aware of the national ramifications of the race. National Republican figures like Florida Gov. Ron DeSantis and Virginia Gov. Glenn Youngkin have headlined campaign events for Zeldin.

Zeldin’s gubernatorial bid has centered on growing concerns over crime and high costs of living in New York, with a battle brewing in the city, where he will hope to pick up more than 30 percent of the vote to supplement stronger showings in the suburbs and upstate.

Hochul, for her part, will hope for strong turnout in in the heavily Democratic city. Biden’s approval rating has held steady in the low-40s in recent polls, though he has remained largely popular among Democrats, who outnumber Republicans in the state two-to-one.

In a statement, Zeldin criticized a comment from Clinton at the Brooklyn event, when the former president pointed to bail reform as one issue being warped into a campaign tool for the right.

“Lee Zeldin, he makes it sound like Kathy Hochul gets up every morning, goes to the nearest subway stop and hands out billy clubs [and] baseballs bats,” Clinton said Saturday.

Zeldin responded Sunday: “Bill Clinton and Kathy Hochul laughing and joking about recent subway crimes tells you everything you need to know about how little they care about your life and safety. You know who’s not laughing? The nine people who died on the subway this year. … We all deserve better.”

Biden, meanwhile, said Zeldin was “all talk” when it came to crime, criticizing the congressman for opposing the American Rescue Plan, which Biden credited with saving police jobs.

“If a politician won’t stand up to his party leaders to keep cops on the beat, if he won’t stand up to the NRA to get assault weapons off the street, do you really think he’s going to help your families keep safe?” he said. “I’m telling you he won’t, but Kathy will.”