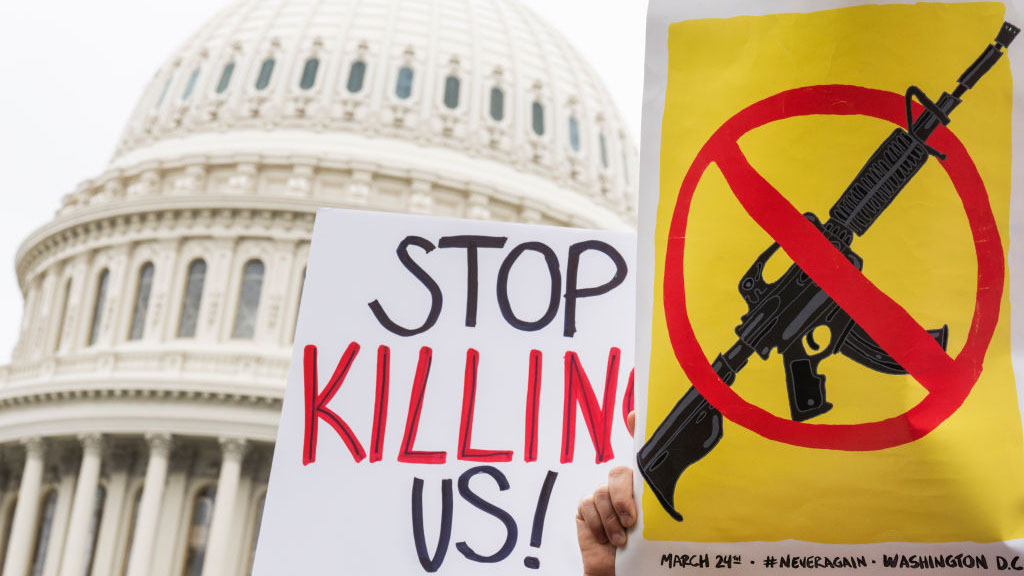 One of Brenda Mitchell’s sons deployed three times to Afghanistan while he was in the U.S. military. He came home.

The other went to meet friends at a sports bar in a Chicago suburb. He did not.

Kenneth Mitchell was shot to death when he intervened in a fight as he was leaving the bar on Super Bowl weekend of 2005.

Seventeen years later, Brenda Mitchell, a pastor, is still fighting to restrict the sale of guns so that other mothers don’t go through the same suffering.

“Our rights, our safety and our freedoms are on the ballot,” said Mitchell, a volunteer with Moms Demand Action for Gun Sense in America in Chicago and a fellow with the Everytown Survivor Network. “And the contrast couldn’t be more clear. I’m fighting to pass laws proven to save lives to honor my son. The other side is fighting to protect profits for gun manufacturers with no regard to public safety.”

Marcel McClinton, who survived a mass shooting outside his church as a teenager, helped organize the March for Our Lives Houston rally when he was 16. And when he was just 17, he launched a bid for a seat on the Houston City Council. While it was unsuccessful, he forced the race to a runoff. Now this gun control activist is helping other Gen Z voters understand the importance of civic engagement through the PeaceJam Foundation.

This year there are only a couple of measures on guns on the ballot nationwide.

A measure in Oregon would make buying a gun harder. It is asking voters to approve legislation that would require background checks and safety training for a permit and prohibit ammunition magazines capable of holding more than 10 rounds.

Iowa would go in the opposite direction and add the right to “keep and bear arms” to the Iowa Constitution and the requirement that any restrictions “be subject to strict scrutiny.” A Des Moines Register/Mediacom Iowa Poll in October found that 58% of likely voters supported the change, which opponents say would make gun legislation more difficult to pass.

But even without specific laws to decide at the polls, guns remain a top concern when a more conservative majority dominates the U.S. Supreme Court and control of Congress is at stake in the midterm elections. Gun safety activists are tying guns to crime, which has been a leading concern for voters.

“Gun safety has gone from a third-rail issue to a kitchen table issue because families across the country understand that these shootings are a threat to their children in schools and in the communities, it’s a threat to public safety,” said Peter Ambler, the executive director of Giffords and Giffords Law Center to Prevent Gun Violence. “They understand that gun violence is the number one contributor to the rise in violent crime across the country.”

Candidates across the country are making gun safety an issue in their races, he said, whether it is Democrat Beto O’Rourke running against Republican Gov. Greg Abbott in Texas or Democratic Rep. Val Demings challenging Republican Sen. Marco Rubio in Florida.

Former congressman and Democratic gubernatorial candidate Beto O’Rourke confronted Gov. Greg Abbott during a press conference Wednesday about the school shooting in Uvalde, Texas, calling the shooting “totally predictable when you choose not to do anything.”

Both of the Democrats, supporters of restrictions on gun ownership, are candidates in states where students were killed in school shootings, most recently at Robb Elementary School in Uvalde, Texas, in May, and at Marjory Stoneman Douglas High School in Parkland, Florida, in 2018. The Parkland shooter was sentenced to life in prison without parole this week.

“There is so much at stake in this election and primarily our children and if we do not put people in that understand our gun laws and understand the right to safety, a given right that should happen for everyone,” Mitchell said. “I know firsthand the pain of losing a loved one to senseless gun violence.”

A poll from Pew Research in August found that 62% of registered voters said gun policy was very important to their vote. The issue was second after the economy, the top concern for 77% of voters.

“Every election is important when your constitutional rights are on the line,” said Lars Dalseide, a spokesman for National Rifle Association Statement. “That’s why the NRA is involved in the vast majority of competitive senate, governor, congressional, and state house races across the country. We’re educating members, gun owners and other voters through town halls, mailers, emails, texts, door knocks, along with print, digital, TV and radio ads to make sure voters know what’s at stake in 2022.”

In June, President Joe Biden signed a bipartisan gun bill, one month after the Uvalde shooting. It restricts access to guns to the youngest buyers and domestic violence offenders and increases money for mental health and school safety programs though does not go as far as the president and other Democrats wanted. The NRA opposed the bill, but enough Republican senators voted for it that it passed.

“Everyone wants their children in their communities to be safe,” said Shannon Watts, the founder of Moms Demand Action for Gun Sense in America. “You know, when I started doing this work in 2012, about a quarter of all Democrats in Congress had an A-rating from the NRA. Today, none do. And in fact, 15 Republicans just signed on to the bipartisan Safer Communities Act, the first federal legislation to pass in nearly 30 years. So that’s really a seismic shift in American politics.”

The new legislation came as the Supreme Court was striking down a century-old New York law that restricted who could carry a concealed gun in public. In New York State Rifle & Pistol Association Inc. v. Bruen, the court ruled that the law violated the Second Amendment.

“We are just not going to stand by while wrongheaded judges strike them down at the behest of gun extremists,” Watts said. “We’re going to keep working to pass new gun safety laws in the states impacted by that ruling. In November we’re going to elect gun-sense champions. And look, I think Bruen opened the door to extremism. But we’re going to go through the window and ensure that we have gun safety.”